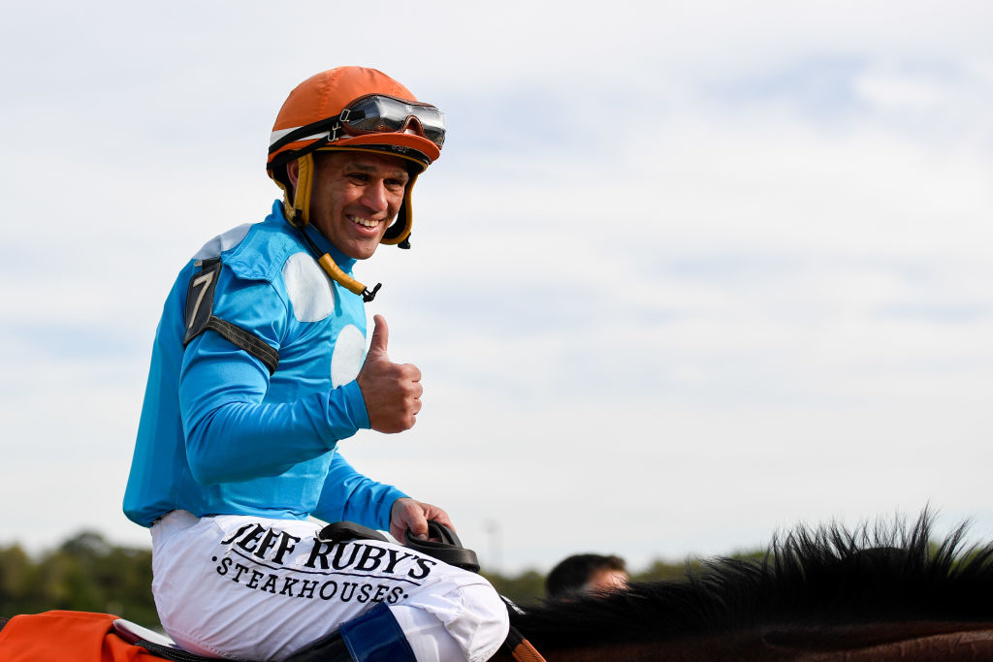 A major highlight of Keeneland's April Meet is the Maker's Mark Mile. Have a read of which jockeys (Javier Castellano 4x winner, pictured above) and their mounts have drawn in this time around. Great chance to remind yourself of some of the celebrated connections who won this contest.

In North American turf racing, there are grass races, and then there is the Maker’s Mark Mile. What could be described as a “signature” event, it represents the very best the division of 4-yr-olds and up has to offer. I will never, ever, forget the 2013 and 2014 editions of this race, as my favorite racehorse of all-time, Wise Dan, put on a show for the teeming masses. He was truly a great American hero, whose heart was decidedly bigger than the totality of his great accomplishments. There are others that have graced the Keeneland Winner’s Circle, but none were better, in my opinion, than the Charlie LoPresti runner who was game, time and time again. Who will win this year’s edition, and join the likes of the great Wise Dan . . .

The Junior Alvarado turf riding clinic continues. Here is another example of why it pays to keep track of who is riding hot when it comes to the grass. I have always thought he had ability, and access to Bill Mott’s runners doesn’t hurt. This Tom Bush-trained mount that he retains here in the Maker’s (G1) is accomplished, after a nice score in the Tampa Bay (G3). A scroll through his PPs reflects some flashes of sheer brilliance. To my eye, he could end up being the best overlay in this whole field. I will back him because boy, that work tab looks good too.

The story of Dan Blacker as a trainer is one of those tales in the Thoroughbred business that proves that good things come to those who work hard. Last month in the Kilroe Mile (G1) @SA, this conditioner won his first Grade I race. It was a stellar performance by his 4-yr-old colt who is a son of More Than Ready. Now, he brings this router to Keeneland in order to keep the locomotion going. It is going to be an interesting move to see in this spot. Funny thing in the Kilroe, the jockey that day was Florent Geroux, who just happened to be in town riding Maxfield for Brendan Walsh. I am not sure if that was the sole reason why Blacker’s colt won that day, but happenchance can make a difference. Maybe Geroux can do it again? Will see . . .

Is a mile the proper distance for this son of Big Brown? I am not so sure. Mike Maker thinks so, and he usually has his pulse on what a horse can do. His record over the past year does not seem to speak to the idea, but with John Velazquez riding him at Keeneland, maybe everything will just simply work out. Having not run since the Fort Lauderdale (G2) back in December at Gulfstream, his connections are starting the 2021 campaign amongst some fine company. I am sure the Breeders’ Cup is on their minds. Off the bench, and into this pool, I am not sure if he can win. If he does . . . I stand corrected.

When Chad Brown and Javier Castellano get together in a turf race of this magnitude, you must consider them contenders, no matter the mount. This one happens to be a nice turf router from last year that attempted 2 of the bookend signature grass races in North America—Pegasus World Cup Turf (G1) @GP and Turf Classic (G1) on KYD Day. Both resulted in 4th place finishes, and lest we forget, those were deep route contests. I have no idea how professional this entry can be as he comes into his 6-yr-old campaign. But as I said, this is Brown-Castellano, plus a Michael Dubb-owned son of Siyouni (FR), so there is no way you can leave them out. Already 1/1 at Keeneland, his only weaknesses appear to be the layoff and the shorter distance. Tote watching for this one seems imperative . . . if you get 6/1, then it could be just too tempting not to bet.

Wow, we are moving from one powerhouse barn to another. Brad Cox has raised his turf racing game to new levels over the past year. From his bases at Churchill and the Fair Grounds, he has caught Brown, Maker, and Casse, when it comes to fielding some impressive runners. Entering this race is a milestone, and I like this combo with Luis Saez. I have made no bones that this rider is hot as blue blazes. There is really nothing he cannot do in the saddle when it comes to turf navigating. He is not quite as good as Castellano, but when given a mount like this son of the great Dubawi for Qatar Racing, it is hard not to like his chances. If there is “give” in the ground on Friday, it will only assist. I think this 4-yr-old colt has all the tools for greatness, and it starts right here in the Maker’s, which would be a “signature” win for the Kentucky-born conditioner.

If there was a co-favorite of mine in this race, then it would have to be Mark Casse’s entry, a son of Candy Ride (ARG). Having John Oxley in your corner as an owner is not too shabby, and Casse isn’t a HOF trainer for nothing. Last time we saw this 5-yr-old, he was trying to keep pace with Blacker’s charge. It didn’t work so well, and he obviously did not care for the SoCal sunshine. It happens. Getting Tyler Gaffalione back aboard is a major plus because his riding on the lawn continues apace. Back in early January, Gaffs took his mount around the 2-turns at Gulfstream almost effortlessly for a score in the Tropical Turf (G3). Certainly, he is going to need more here, but with these connections behind him, it isn’t impossible by any stretch. I am banking on the price being right too.

A Calumet homebred ridden by local favorite Corey Lanerie sounds inviting, and so does the training ability of Jack Sisterson. However, I am not much of a fan of this jockey’s grass riding ability, and his mount is going to be severely overmatched when it comes to measuring up against the rest of this field. Sometimes you have to call a spade a spade, and just face the facts. Having an English Channel bloodline circulating though it doesn’t hurt, but that is not going to win the day alone. Sisterson’s outfit has improved in “Graded” affairs over this past year, and that is good to see.

The “presumptive favorite” by the oddsmakers will probably end up being this son of Dark Angel (IRE), a sire who has bred his share of great turf routers. To be a miler on the grass, you need a special set of skills that combine great starting ability with a similar effort at the conclusion of the race. It isn’t for everyone. Gosh knows, conditioner Chad Brown has tried to win the Maker’s over the past couple of years with this one, and he has missed. Last fall in the Shadwell Mile (G1), which is the October counterpart to this race, he had everything in hand until a Paulo Lobo horse named Ivar swept down the lane seizing the victory. In defeat, bettors wondered if this Peter Brandt-owned specialist was just getting a little too long in the tooth. I think he still has ability, but I am not sure if he can win after what amounts to a 5-month layoff since the BC Mile. That race at Keeneland saw him finishing a woeful 10 out 14. Maybe it is time to know when to say when . . .

Before Joel Rosario heads down to Oaklawn for Arkansas Derby Day, he rides once again in the Maker’s, and this time draws a runner of eminent ability. Mike Maker’s “other” entry is probably the better of 2, in all actuality. As a 3-yr-old last year he made Three Diamonds Farm some purse money, and comes into this race with $393,620 to his name. Out of Lemon Drop Kid, he won the Transylvania (G3) as the favorite, and then proceeded to take on all comers in the late summer and fall that included races at Saratoga, Santa Anita, and Woodbine. Well-traveled, and coming off the shelf, if Maker has him cranked, he will be formidable. I don’t happen to think that is the case because I honestly think he needs a race before his true 2021 gets going. This is Maker we are talking about, so proceed against him at your peril. I know I am . . .

Join us Friday for all of our Keeneland selections as we continue our Handicapping Challenge! Should be a great set of races from Central Kentucky!