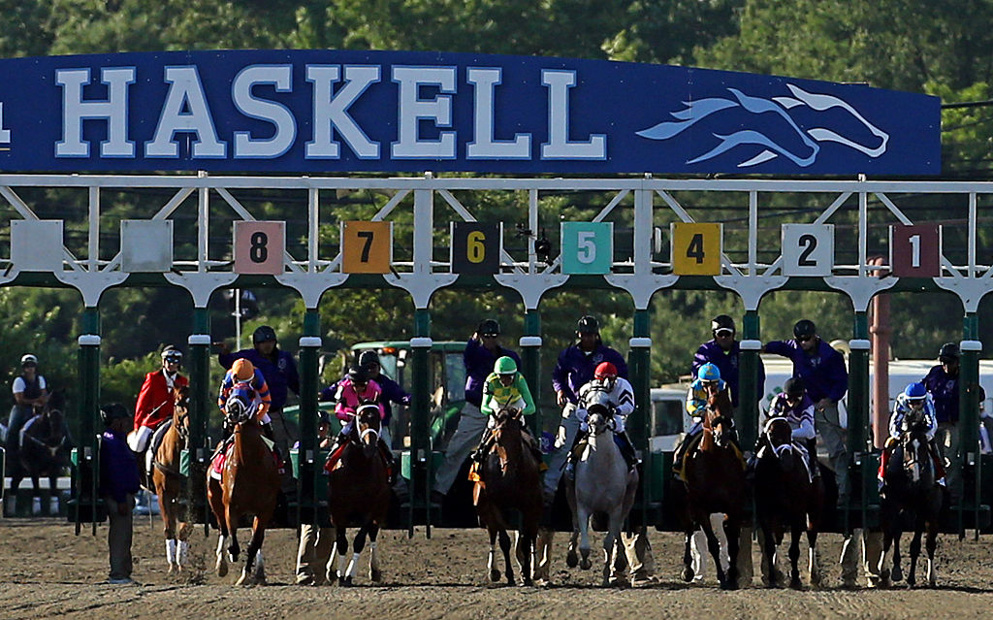 The Haskell Invitational is another major race leading to the Breeders' Cup Classic. With a full card of superb races, The Shore is the place to be on Saturday!

Monmouth Park, with The Shore's greatest stretch, is once again hosting the Haskell Invitational on Saturday. A major stop on the road to the Breeders' Cup Classic, the winner receives an all-expense-paid ticket to Keeneland in November. On top of that, the undercard boasts a series of stakes races ... it's Monmouth's biggest day of the year!

The Jersey Shore P6 is off and running on Saturday, and it begins in the blocks with a Grade 3 contest. Let’s face facts … this is Chad Brown’s race to win, no matter how you slice it. Either Pipeline #6 or Highly Motivated #7 would be worthy winners for different reasons. The former, owned in-part by JD Gunther, came out of the Cigar Mile (G1) last December, and in his next start at Aqueduct in April the son of Speightstown just blistered the 6-horse field. If Manny Franco can claim the lead, then this race could be his. As for Brown’s “other” runner, bettors will remember the colt by Into Mischief well from the ’21 Derby Trail. His duel with Essential Quality was pleasing to watch, and after a major break after the KYD147, he has a couple of OC62.5kn2x runs (Keeneland and Belmont). That last attempt was a victory by just a neck when Flavien Prat edged out Stage Raider. The Klaravich-owned power runner probably has his best races ahead of him, and with that big late kick, he just needs a healthy dose of pace to run into. There is no getting around this Brown pair. Use them … moving right along …

Taking to the turf at Monmouth, it is going to be an all-out battle in this deeper route. Out of these 8 runners, once again, Chad Brown is well-represented. He has quite a trio in Peter Brant’s duo Lemista #2 and Flighty Lady #5, plus Head of Plains’ Fluffy Socks #6. Any one of these turfers can win, but I am going to spurn them all. That’s a dangerous tactic considering the company, but I am much more impressed by the potential behind Vicky Oliver’s Core Values #8. A strong filly by Honor Code, she was one of those “runbackers” that plied her trade 2x during the April Meet. Even though she was “outkicked” in the Grade 1 New York S., it was valuable experience that can be of use today. Florent Geroux hops on a flight from Del Mar, and has the ability to get the job done. One other grass specialist that I want to use is Brendan Walsh’s Lady Rockstar #4. Bred by the great Frankel (GB), she has ratcheted up in class impressively, and won both of her U.S. races. An import from the UK, Walsh clearly has her headed in the proper direction. She gets the services of Jose Ortiz, and that makes her a formidable foe. My 2 picks look inviting on the tote, and will give this ticket a big boost … especially with so much cash headed towards Team Brown.

Named after that heroine of the American Revolution, the race begins and ends with Chad Brown’s Search Results #3. The 4-yr-old filly by Flatter has established a level of consistency that is something to admire. Loaded with class, Brown has put her up against the very best in races as a 3-yr-old … like the KYOaks (G1), the Acorn S. (G1), and the Test S. (G1). In ’22, she obviously needed a race after her poor showing in the Distaff H. (G3) at Aqueduct, before coming back for a score in the Ruffian S. (G2). The Ogden Phipps (G1) was not her day (vs. the fab Clairiere and Malathaat), but she easily has the chance to make amends here. This is a clear “Single,” if there is one on this Saturday card.

Heading to the back half of the P6 sequence, we have a good draw for this year’s edition of the U.N. Any discussion about this field begins with Christophe Clement’s celebrated star, Gufo #10. When it comes to leaders in the deep route turf division, this horse by Declaration of War is one of the top tier competitors. With over $1.5 million in earnings, he keeps racking up wins. Even though he has never shipped to Monmouth, he and regular jockey Joel Rosario will be near the lead as the wire approaches. Using him is essential. One other entry that does have the ability to take him on is Chad Brown’s Adhamo #1. Owned in-part by Madaket and Michael Dubb, the colt by Intello (GER) just did not have enough turn-of-foot to catch his stablemate, Tribhuvan (FR) #4, in the Manhattan S. (G1) at Belmont. One has to think that he is “due” for a major U.S. victory, and this could be it. Ridden expertly by Flavien Prat, he has what it takes to choose his spots, and creatively navigate traffic troubles. What we know … this is going to be a heck of a race!

The signature race of the weekend is the Grade 1 Haskell. When you get your invitation in the mail, then you know you are headed into some primetime. I am pretty convinced that Chad Brown’s Jack Christopher #7 is a “deserving favorite” from this titanic barn. It is well-documented that this runner’s health made him a major scratch just before the Breeders’ Cup Juvenile (G1). Had he physically been able to compete along the Derby Trail, it is safe to say that he could have made significant noise. Ridden by Jose Ortiz, the only real question is … the stretch out to 9-furlongs. I am not too worried about this question because in the end, the best horse will win. One other runner that I quite like, and was behind in the Kentucky Derby (G1) is Brad Cox’s Cyberknife #1. The well-bred colt by Gun Runner is coming off a win in the Matt Winn S. (G3) at Churchill Downs. The 3-yr-old scored by just a whisker, but the purpose was to get her proper “prep” before this major race. The hot pace in the Derby was really a death knell for the young phenom, and the result was a total surprise. Getting back to a running style like he exhibited in the Arkansas Derby (G1) would be optimal. His mental development continues, and with Florent Geroux aboard once again, he has a chance to make a splash at a price. We all know that Bob Baffert’s Taiba #2 is going to take significant money … I am staying away from this overrated entry … roll the dice!

After all the “graded” action, we will finish up with an open company MC affair on the grass. Going around 2-turns, I am looking for a top pick that can handle both the sod and the condition. When it comes down to it, I think Peter Walder’s import from Gulfstream Park looks best. Openthegate #10 was up against tough company in South Florida, and even though the filly by Arrogate did not notch a victory, she gained valuable experience. Walder had his share of winners during the Championship Meet, and that competition was at a high level. Getting Paco Lopez to ride in this spot is a great move, despite his controversial tactics. Let’s use this talented 3-yr-old who comes to Monmouth for the first time, but also include a few others … David Duggan’s Requestforproposal #6 and Claudio Gonzalez’s War in Paradise #2. Both of these turf routers have nice class lines, and their pedigrees make them “key” plays. What a race to end what amounts to a challenging .20 P6 ticket … time to get to the window and place our bet!

Enjoy some action from Monmouth Park! The tradition by The Shore continues… Don’t forget to follow us on Twitter … Horseracing_USA !!!