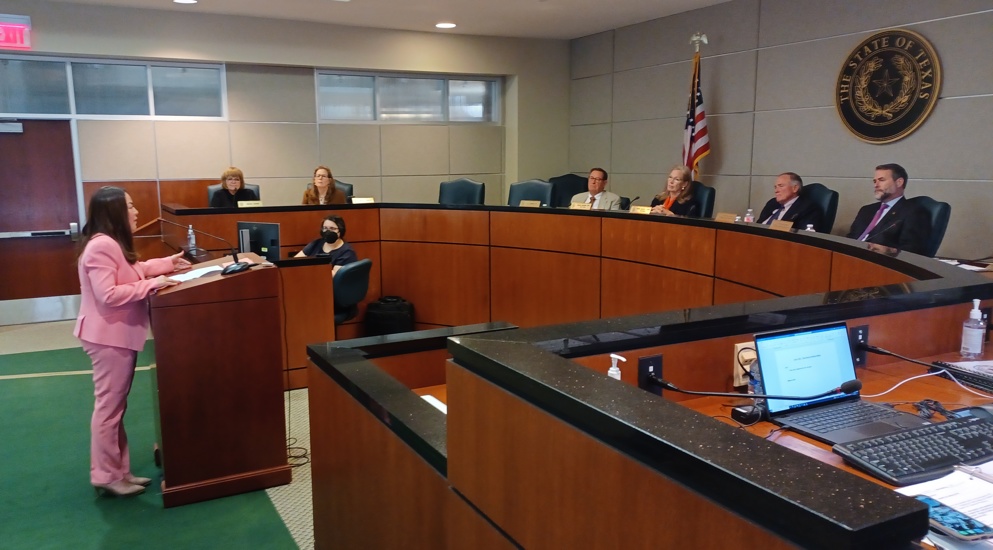 The June 8th Meeting of the Texas Racing Commission had a couple of guests from the Horseracing Integrity and Safety Authority (HISA) present ... Lisa Lazarus (pictured, on left) and John Roach. Here are some of the highlights ...

NEWS--In Austin, with the State Capitol in the background, which stands 14.64 feet taller than the U.S. one, the Texas Racing Commission came face-to-face on Wednesday with members of the Horseracing Integrity and Safety Authority (HISA).

Just before 10:30 a.m., many wondered before the Meeting convened if some "tense moments" would be on the docket. This was especially true, considering that just a few weeks ago, Executive Director Amy Cook, issued what was thought to be a "line in the sand," when it came to Texas possibly opting out of the federal law that created HISA and/or shutting down Thoroughbred racing in the Lone Star State. After she "walked back" some of her comments to Horseracing.net/us, HISA's CEO, Lisa Lazarus, and Lead Counsel, John Roach, accepted an invitation to come to Texas for a visit. In the end, while some strong statements were voiced by the Chairman, Judge Robert C. Pate, and during the "Public Comment" portion, there seemed to be a spirit of mutual respect and admiration between the parties.

Judge Pate, who presided over the proceedings, utilized his time to introduce many of the concerns that Cook discussed in her letter from May 20. He made it known from the state perspective that, "It occurs to me that we are at a tipping point in the history of horse racing in Texas ... things are changing for the demonstrable better across the Agency." The Judge admitted, "I want to make it very clear that this Commission agrees with the HISA goals of increasing the integrity and safety of the sport." With misgivings he said, "What we do not agree with is the implementation of a law passed by Congress as part of the COVID relief massive legislation package, on a House voice vote, and without hearings in the United States Senate, followed by Senate regulations posted for comment where it appears few of the industry comments were heard or adopted." Judge Pate lamented that, "This is not the fault of Ms. Lazarus and Mr. Roach ... but it is the truth." He went on to admit that, "They have a tough job to do."

Once the public was allowed the floor, a number of individuals took to the podium to voice their concerns over HISA's reach. They included, among others, Mindy Coleman, counsel for the Jockey's Guild, and Vice President of the Executive Board for the Texas Thoroughbred Association, Tracy Sheffield. Although they were limited to 3 minutes, each voiced concerns about HISA. Coleman wanted it on the record that while they agreed with the regulatory agency's overall intent, "We are concerned that the rule scheduled to go into effect on July 1st of restricting the riding crop possesses a great danger and risk to our members, that the penalties are severe and unjustified, and that it does not reflect the ideas that were voiced by Hall of Fame rider, John Velazquez, who was named to the Racetrack Standing Committee." Sheffield was even more bold when it came to her comments concerning the "Registration Phase" of HISA when she said, "I would ask the Racing Commission to find some kind of grace period or postponement of the enforcement compatible with the law, until the rules can actually be written, and then those registering with HISA will have the ability to know to what they are agreeing."

Once Amy Cook completed her own report on TXRC business, and several housekeeping procedures were dispensed with, it was time for what Judge Pate wryly called, "the main event." HISA's Lazarus took to the microphone first, and after voicing her "thanks" for the opportunity to speak, offered a sincere and frank set of statements about HISA's intent. As she has said several times to the turfwriting media, "My job is to implement it ... really nothing more and nothing less." She reminded the "esteemed body" that she has only been on the job for a short time, but she wanted to make it clear that, "Texas is very important to horse racing, very important ... and I am going to do everything I possibly can to find a way forward with this Commission and with this state."

Lazarus went on to discuss commonalities, and all of the shared goals that are laid out on the table. After her remarks, she said that, "Finding common ground, whether it's concerning the registration process or working with horsemen is the priority." Tracking and data gathering is part of the process she admitted, but the intent is to focus on what is going to happen on July 1st. Right now, she would like to see more "sign-ups," and she promised that there will be a blanket campaign to get the information that is needed. As for banning those that have not registered, she said, "We are linking our systems with Equibase, and that will flag those that need to register ... tracks will be informed in the days before the race, which should give covered persons time to give us the information we require." Lazarus is hopeful they can meet their goals, and she will be going to "parachute events," traveling to places like Evangeline Downs, which is in the middle of its live Thoroughbred Meet.

Once Lazarus was finished, she passed the baton to her colleague, Lexington attorney and former judge, John Roach. Married to a Texan, he joked that, "I probably imagine that I am the only outsider here that has been to Manor Downs." Roach wanted to remind the TXRC that he is "A true believer in this ... I think it is so important that we do everything we can do to protect this beautiful sport." Next, he reminded everyone present that the "Comments" phase of HISA was begun last fall, and that everything that is submitted is scrutinized and taken seriously. He echoed what Lazarus said when he told Pate and the other commissioners that, "Lisa is right... Lisa, under her leadership, has made it clear that we are going to listen and respond when we can."

Roach mentioned how difficult "definitions" for terms like "trainer" can be, which was a point raised during the "Public Comment" section from earlier. He reminded everyone, "That is the definition in the statute ... when Congress sets forth the definition, and we do not have a lot of flexibility." Both HISA officials reiterated the point that the registration would continue apace, as several locales like New York were having great success, with over 500 getting their information in one day. Those "covered persons" that do not have online access would be assisted by teams equipped with laptops. Joining with horsemen's groups, the intent is to spread the word as much as possible in the coming weeks.

Once Judge Pate thanked the participants, he invited Lazarus and Roach to stay for more discussions behind-closed-doors, as an "Executive Session" would reconvene elsewhere for what was probably the true "main event." The next Texas Racing Commission Meeting is set for August 24, 2022 at 10:30 a.m.