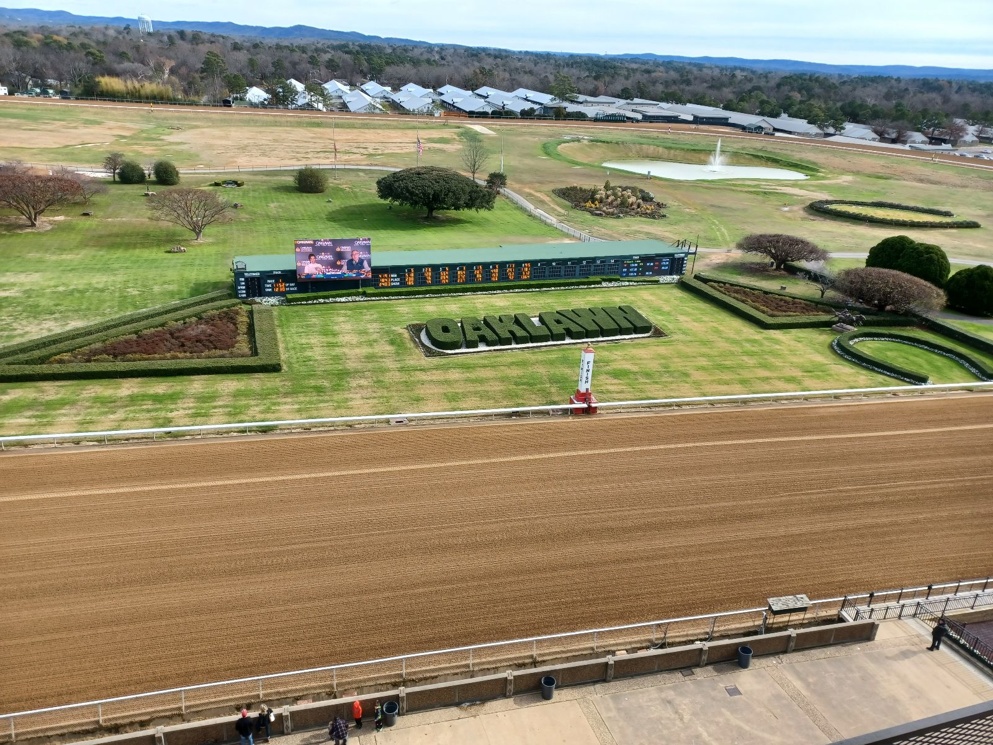 Oaklawn Park is set to start another 3-day weekend of racing. With sleet on Thursday, it looks as though Friday might clear up. Check out these free selections below ...

Hot Springs, the home of Oaklawn Park, is like a college town ... a college town of horse racing to be precise ... The Arkansas hamlet is hosting an extended festival with some superb racing. Betting options are the best in the country! We are facing another 3 days of wonderful racing from the celebrated home of Arkansas Thoroughbred culture!

Here is a gelding that is looking to improve off a MC class drop. In 3 career races, this 3-yr-old by Outwork has yet to hit-the-board. Jason Barkley is a quality Kentucky-based trainer who has yet to make his mark during this Meet. With only 1 win in 42 starts so far, he has the ability to get hot quickly. I like that he sticks with the stellar riding ability of Francisco Arrieta, who guided him last out going 6F on 13 Feb. The race before that was a tough MC30k off-the-claim for Barkley, and it was a sloppy track on New Year’s Day. That will probably be the situation on Friday after a system moved through 24 hrs before. The spot still looks promising, and I like that this conditioner has the confidence to bring him back so quickly.

The Oaklawn card on any given day is laden with value, and this Friday one is no exception. I have written about, and picked a number of horses from the barn of Randy Morse … he can flat out train. I like this son of Uncle Mo because even though he is an 8-yr-old, he still can cover some ground. The last time he hit the track, the DD Stables-owned entry was shuffled towards the rear of the field, and just had too much work to do. Still, he ended up 6th. Now, he gets the benefit of a break, the class drop down from OC50k Co., and a new rider in Luis Contreras. When Morse makes moves like this, his horses are usually pretty live. Remember, Morse has the only runner that is making a class move of this nature, and I think it will result in a score.

At Oaklawn, the mile distance is a tough one because if you need the lead, then you better not be drawn to the outside. It is just really tough to get there. Luckily for Ron Moquett’s entry, Prodigious Bay #2, this is a horse that is breaking from the 2-hole. Louis Cella (OP’s owner) invested in this son of Bayern, and I expect this one will probably try to get loose on the lead … setting some stiff fractions. With the hot-riding David Cabrera in the irons, he is going to have to try to outlast them all. In an OC50k last time on New Year’s Day, he ran out of gas just before the top of the lane. An excellent conditioner like Moquett is probably thinking that a mile suits. I like this entry, but don’t see much value in him. Instead, I am rather intrigued by Steve Asmussen’s oddity—Dr Jack #5. From the leading barn at the Meet, this colt is well-bred by Pioneerof the Nile, and after nearly 2 months off, is getting back to it. I say “oddity,” because the HOF conditioner decided to run this 4-yr-old colt on New Year’s Eve in a tough ALLW Co. race at Turfway Park just outside of Cincy. It was a poor showing, an effort where he rated, then summarily gave up. Despite this downer, let’s not forget this former Pletcher runner competed last summer against some Cox aces, with Mandaloun in the Pegasus $150k @Mth, and Essential Quality in the Jim Dandy (G2). I think this is one of those reset situations, and Asmussen is trying something different … new track, rider in Geo Franco, and at an appropriate level that denotes his ability. “Off-the-bench” is always a risky bet, but it also brings tremendous value. Let’s go with Asmussen and Franco … here is the bet!

Enjoy another fab Friday trackside! Best of luck on another run at Oaklawn Park! Don’t forget to follow us on Twitter … Horseracing_USA !!!