An overview of the 11 Horses set for Preakness 145 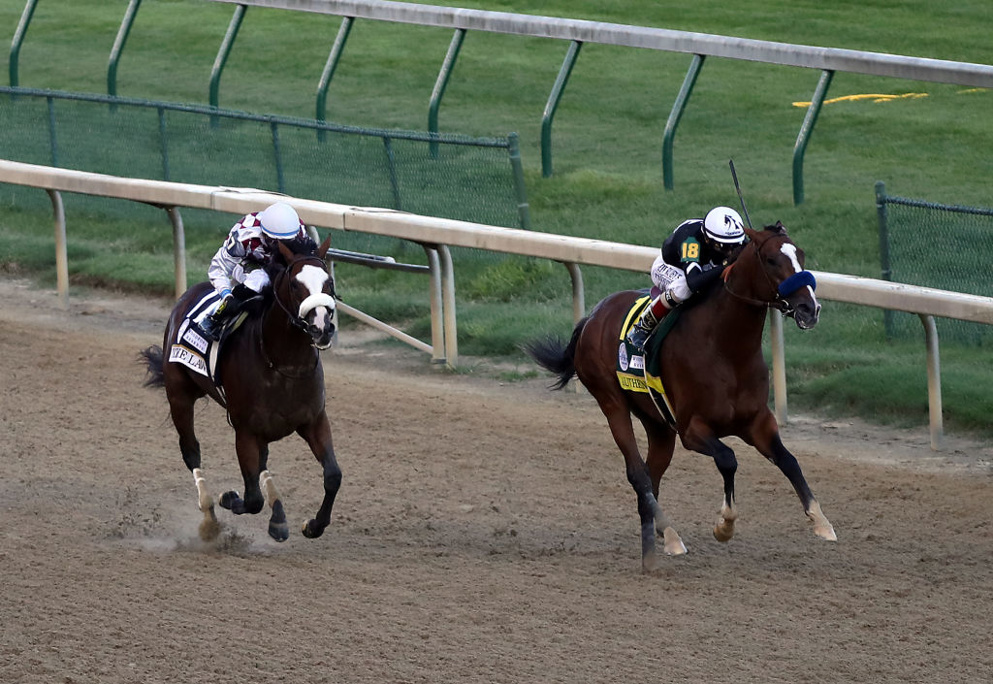 Authentic should be the favorite for the Preakness

Our in-house handicapper gives an overview of each of the 11 horses set to contest Preakness 145. Our racecard is below where you can bet with any of our partners and he'll be back on Friday with his detailed preview of the final leg of the 2020 Triple Crown...

Excession (#1) - He’s coming off a runner-up finish in the G2 Rebel in which he finished just behind Nadal, who at one time was a leading contender for the Kentucky Derby, but this horse would be a complete shock if he were to win the Preakness. Despite some late trouble, Excession got a great trip in the Rebel as he sat well off a ferocious pace and took advantage of an inside-favoring strip late in the day at Oaklawn Park to come within a length of victory. He earned a 95 Beyer Speed Figure for the effort, which puts him in the exotics mix here, however he hasn’t run since mid-March and I don’t trust him at all to reproduce that level of performance. He’s a hard pass for me.

Mr. Big News (#2) - No one’s stock received a bigger boost out of the Kentucky Derby than this guy, mostly because he was a relative unknown prior rounding out the trifecta in the ‘Run for the Roses’ with a legitimately good effort. Even more than Authentic, Mr. Big News improved by leaps and bounds in the Derby, albeit with a very good trip. He did get parked wide around the far turn and still came with a strong, sustained rally in the stretch, but before that he was in an ideal spot in midpack behind a swift pace. It was the kind of performance that’ll make you take notice as it seems he’s really starting to blossom in the second half of the year, however he never really threatened Authentic in the Derby and he’d need to take another step forward to win this race. He’s a contender, but I’m not yet ready to put him on the level of Authentic or Art Collector.

Art Collector (#3) - It didn’t take long for us to arrive at my top pick in the Preakness. Art Collector’s connections made a commendable decision to skip the Derby with him, and if he’s ready to fire his best shot in this race I think he has a very good chance to post the mild upset over Authentic. This horse has simply been a freight train in his two-turn races this year, rattling off three straight open-length victories at a trio of tracks in Kentucky. While the competition he’s faced has been suspect at times, he’s been convincing in all of his wins this year, especially two starts ago when he easily handled Swiss Skydiver in the G2 Blue Grass. He has the speed to take the race to Authentic early but is also capable of tracking the pace if need be. I don’t think he’s turned in a performance on par with Authentic’s Derby win, but if that race proves to be an aberration or Authentic regresses at all, which seems like a definite possibility, Art Collector is poised to capitalize.

Swiss Skydiver (#4) - I have nothing but the utmost respect for this filly, who just keeps running good races regardless of venue. Her consistency should be lauded and is certainly a feather in her cap in a race in which the favorite’s backing stems largely from a solitary strong performance, but she’s going to need to improve to beat Authentic or Art Collector, the latter of which gave her a sound thrashing Blue Grass. It is encouraging that she was so dominant in the G1 Alabama at a mile and a quarter, but in retrospect I’m not sure that was a very good field and I’m not a big fan of Shedaresthedevil, who beat her last out in the G1 Kentucky Oaks. I have much admiration for Swiss Skydiver and I think she’s very likely to hit the board, but I put her on a second tier of contenders alongside Mr. Big News.

Thousand Words (#5) - This horse is going to get another crack at Triple Crown glory after flipping in the paddock of the Derby and being forced to scratch just minutes before the race. I was dubious of his chances in the Derby so of course I’m skeptical of him again here, and he’s perhaps most intriguing as a possible foil to his stablemate Authentic. He’s actually kind of similar to Authentic in that he has one race that appears to make him fast enough to be a contender, which came last out in the Shared Belief at Del Mar when he defeated Honor A. P., however he’ll be hard-pressed to make the lead again in this spot and is clearly the lesser of the two Baffert runners.

Jesus’ Team (#6) - This former claimer has been a revelation since being transferred to Jose D’Angelo in early spring, stringing together a bunch of good races on dirt for his new trainer. That said, he’s still a handful of lengths slower than the top contenders in this race, and he’s even finished behind more minor Preakness players in recent starts, such as Liveyourbeastlife in the G2 Jim Dandy and Pneumatic in the Pegasus. He’s a neat story and is one of the more consistent runners in the field, however he’s hard to recommend from a wagering perspective.

Ny Traffic (#7) - I actually liked him a little bit last out in the Derby, but he betrayed that trust with a distant eighth-place finish. He was tracking a very fast pace in that race, however it was a pace set by likely favorite Authentic, so it’s difficult to envision a scenario in which he turns the tables on the Derby winner. If there’s a case to be made for him it’s that he came within a nose of beating Authentic in the G1 Haskell two starts ago, and if that race was at the Preakness’ distance instead of a mile and an eighth, he probably would’ve won. He rarely turns in an off effort so maybe it’s prudent to forgive his clunker in the Derby — and if he bounces back to the way he ran in the Haskell he’d have a shot — but the disappointment of his last race is still too fresh in my mind.

Max Player (#8) - I think we know what we’re getting out of Max Player at this point: a somewhat strong, belated run that generally lands him an on-the-board finish but leaves him well short of winning. He did come with such a run last out in the Derby, but he was still beaten 3 ¾ lengths by third-place finisher Mr. Big News and was forced to settle for fifth. This is probably an easier spot than the Derby and the pace figures to be contentious, but I’m not sure he’s a realistic win candidate. At the bottom of trifectas and superfectas, however, he’s your man.

Authentic (#9) - The biggest question I have with your Derby winner and likely favorite is how does a horse go from being life and death to hold off Ny Traffic at a mile and an eighth in the Haskell to setting a much faster pace at a mile and a quarter in the ‘Run for the Roses’ and turning back top 3-year-old Tiz the Law? It’s almost inconceivable to me and at first I suspected some sort of track bias, but after going back through the card I could find no such quirk; it seems his Derby win is for real. The kicker is that if that trip doesn’t get him beat - setting a very fast pace at 10 furlongs against a better field — then what scenario needs to unfold in this race for him to lose? There is some more speed to potentially go with him and it remains to be seen if he actually needs the lead to be effective, however there’s no denying if the same horse we saw last month shows up again he’s probably going to win.

Pneumatic (#10) - This guy has received a bit of a buzz heading into this race following a pretty convincing win in the Pegasus at Monmouth Park over fellow Preakness entrant Jesus’ Team, but I didn’t think much of the field he beat that day and I don’t think more ground is going to benefit him. I could definitely see him getting involved for a minor award, but that appears to be his ceiling in this race.

Liveyourbeastlife (#11) - The Jorge Abreu barn really came alive at the Saratoga meet, which was a rising tide that no doubt lifted the boat of Liveyourbeastlife, who last out finished a fast-closing second in the G2 Jim Dandy at the Spa. This horse does have a sparkling pedigree and had previously hinted at some serious ability, so I don’t think his recent improvement is just a case of a trainer getting hot, but I’m very skeptical that his last race will translate here. Even if it does it would still put him on the outside looking in.

Free Mountaineer Picks for Tuesday 1 December 2020 as HorseRacing.net looks at the races and give you their Free…

Free Delta Downs Picks for Tuesday 1 December 2020 as HorseRacing.net looks at the races and give you their Free…

Free Mahoning Valley Picks for Tuesday 1 December 2020 as HorseRacing.net looks at the races and give you their…

Free Parx Picks for Tuesday 1 December 2020 as HorseRacing.net looks at the races and give you their Free Horse…

Free Zia Park Picks for Tuesday 1 December 2020 as HorseRacing.net looks at the races and give you their Free…

Free Mountaineer Picks for Monday 30 November 2020 as HorseRacing.net looks at the races and give you their Free…

Free Parx Picks for Monday 30 November 2020 as HorseRacing.net looks at the races and give you their Free Horse…

Free Delta Downs Picks for Monday 30 November 2020 as HorseRacing.net looks at the races and give you their Free…

Free Mahoning Valley Picks for Monday 30 November 2020 as HorseRacing.net looks at the races and give you their…