The Crop: Perspectives from Hall of Fame Jockey Ramón Dominguez 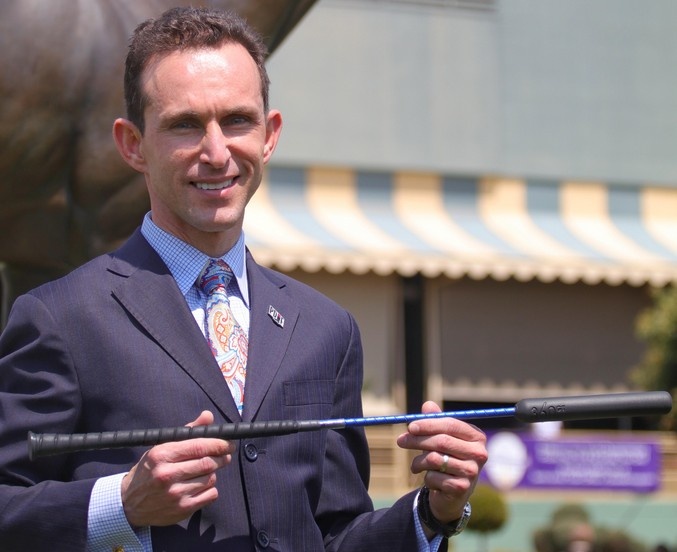 Ramon Dominguez spoke with HorseRacing.net about the crop

A 3-time winner of Breeders' Cup races, Ramón Dominguez is not a “former" about anything that he does. He built a Hall of Fame career by riding some of the top Thoroughbreds at the elitist of levels, like Gio Ponti, Better Talk Now, Little Mike, and Invasor (ARG), just to name a few. Yet, it was the expertise he carefully collected over some 15-odd years of American competition, and before that in his native Venezuela, which formed the foundation for everything that he accomplishes. Each day is an endeavor for him, where he plies his trade.

As a businessman, he formed a company to create the 360GT, a riding crop widely used across the industry. It is praised for its ability to deliver both guidance and humanity in its use. Dominguez hasn’t stopped there; his work has branched out to non-profits including the Permanently Disabled Jockey’s Fund (PDJF), and the Race Track Chaplaincy of New York, where he gives of his time freely and gladly.

Today, he joined me for a discussion of the current state of rules regarding riding crop usage and rule-making in American racing.

J.N. Campbell: I appreciate you being with me today Ramón, look forward to a chat…

Ramón Dominguez: Sure, it is my pleasure. Thanks for having me.

J.N. Campbell: Ramón, you have devoted a sizable amount of time since your retirement from this great sport supporting causes and backing ventures that are structured to help promote its continuance. What are some of your guiding principles that keep you focused?

Ramón Dominguez: The love for the sport is the main driving force behind any endeavor. Having said that, some are a mix between personal satisfaction and business. The other ones feel like a moral responsibility to contribute to a sport that has giving me so much.

J.N. Campbell: I want to spend some time getting your take and reaction to the discussions that have been raging among racing commissions and jockeys concerning riding crop use. Where do you stand on the substantial changes that the state of New Jersey has made? Misguided? Too hasty? Too progressive?

Ramón Dominguez: What has been adopted in New Jersey is the strictest crop rule we have seen, and other than completely removing the crop, it cannot get any stricter. It definitely seems way too severe of a rule to me.

J.N. Campbell: And what about California and their version of the new rules? Opinion there?

Ramón Dominguez: With the amount of pressure that California has been under, it is understandable changes had to be made. The restricted underhand usage is a huge change for the riders, and one that may take some time before they can completely transition to. Allowing jockeys to use the crop no more than six times during the race has some challenges for both the rider, as well as, the betting public.

J.N. Campbell: What do you mean, exactly?

Ramón Dominguez: As a jockey, other than making sure you keep your mount, yourself, other horses, and fellow riders safe, your main job is to help your horse reach its maximum placing. In order to do so, while riding a horse with a laid-back demeanor, that wants to only put forth effort according to what’s being asked of him, you may sense the need to use the crop. This is a way to incentivize him. Sometimes you have to do this as early as the last three-eighths of a mile. If he is responding well to it, by the time you reach the last sixteenth, your main tool to ensure your horse reaches its maximum placing has been taken away from you. And with that, your likely opportunity to win; this applies not only to you, but to your connections, and equally important, the person who placed a bet on your horse.

J.N. Campbell: Very good example… Now, I wanted to ask you about two senior members of the Jockeys' Guild, John Velazquez and Mike Smith. They both have been fairly vocal about the dangers that these new changes pose to riders. Are they being too firm in their positions on this subject? Or are they defending a viable corner of the argument against such moves? Please explain your position...

Ramón Dominguez: There are many valid concerns and different opinions. Personally, my biggest worry is what happens when the need for a rider to take corrective action to protect himself, as well as the animal, arrives. That is not visible to the observer. I think knowing that the jockey may have the predicament of doing what is right “safety wise,” but possibly faces penalties is uncompromising. Should they take the chance to be proactive or run the risk that may cause a safety problem? That’s not fair to the rider, the athletes out on the track or the integrity and future of the sport.

J.N. Campbell: It seems to me after talking with everyone from leadership of the Jockeys’ Guild to members of the California Horse Racing Board, that one of the issues with the riding crop is perception. You invested your ingenuity, time, money, energy into the 360GT Riding Crop, isn't it the answer to this particular problem? If the public saw and felt what you developed, would not that make a huge difference? Changing our culture, in other words, might be in order?

Ramón Dominguez: Perception is an issue that can only be solved by bringing to light the truth through education. The most fundamental point that needs to be addressed is the changes this tool has undertaken. The most significant of these being the creation of the 360 GT.

J.N. Campbell: There is so much potential if the public would just hold one of your crops.

Ramón Dominguez: Yes, indeed. If the public sees and feels the foam, in the area of contact, as well as the edge-less cylindrical shape, that will help them understand. This is a humane aide. Along with that, there needs to be an educational conversation with the goal of explaining how to account and incentivize those laid-back type of horses I was speaking about earlier. Then, we are maximizing their placing, and therefore, maintaining a level playing field.

J.N. Campbell: That makes sense. I appreciate your time and thank you very much!

Ramón Dominguez: Not a problem. Thank you.