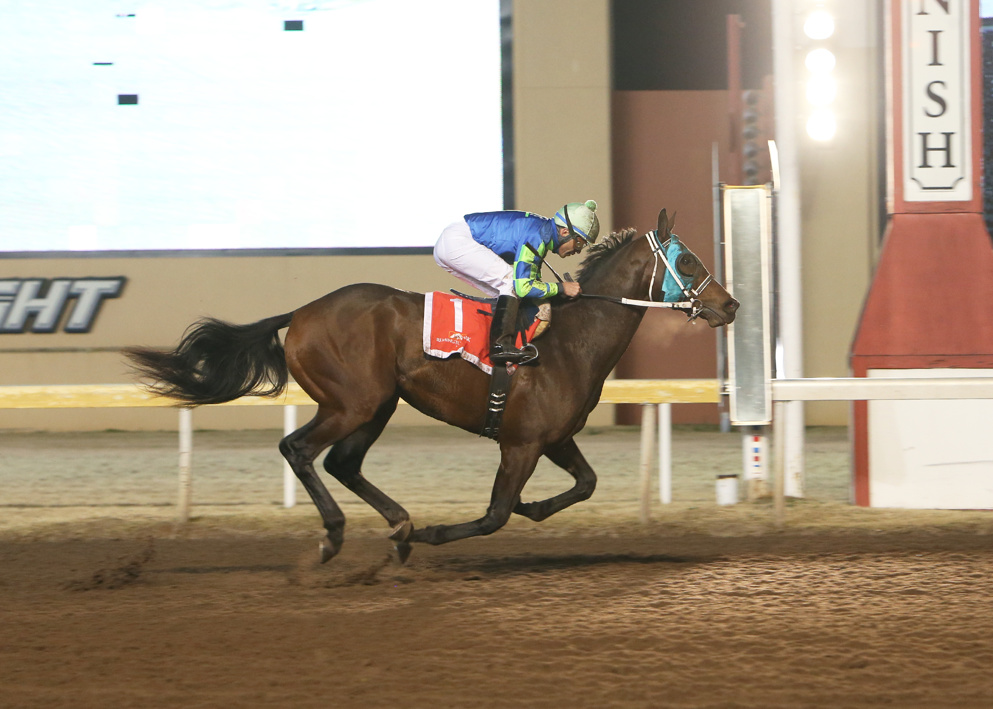 Last year in the Springboard Mile at Remington Park, Todd Fincher's Senor Buscador romped ... will Fincher return to the winner's circle? Check out this Late Pick 4 ticket to find out ... (Photo courtesy of Coady/Remington Park)

The finale at Remington Park, as their Meet closes, boasts a strong card that is anchored by the $400k Springboard Mile.

This is an important race for 2-yr-old colts, not only because of the purse, but Churchill Downs has tagged it as a "Points" race for the 148th running of the Kentucky Derby. Runners who are entered without Lasix have the opportunity to score 10-4-2-1, which could secure them a spot in the starting gate for the "1st Saturday in May."

The Friday Night card should have a strong Late Pick 4, and you will find our J.N. Campbell's take on that sequence below ... At Horseracing.net/us we have you covered, including all of the action! It is a good time for some of the best that North American racing has to offer. Stay tuned!

With guaranteed money in the kitty already, that means we have a foundation to build on in this Late Pick 4 Pool. Kicking off the sequence is a “Non-G” event in what amounts to a short route contest. I would pay close attention to the weather, as the Southwest is getting hit with some rainfall on Friday. Out of these, clearly Brad Cox’s Marion Francis #7 will be the favorite. Here is a filly by Constitution that moved up nicely into Stakes Co. after running well at Oaklawn during the Spring 2021. The only other rider to pilot this one, other than Florent Geroux, is Martin Garcia. He is in OKC to handle the chore. There is no question that Cox’s hand is strong, after the 3-yr-old won at Keeneland by a neck in a OC100k race. If she is as sharp as that, then she will be very tough to tangle with late in this race. For that reason … and that reason alone … she is a “Single.” I am not too concerned about leaving out Steve Asmussen’s Casual #6. That filly went to Zia Park for the Distaff 75k, taking on Todd Fincher’s Canoodling. She was no match for that fine router, and I think this is just too tall an order to best Cox’s well-heeled filly. Moving on …

As I scan the form of this 2nd Leg, I am looking for a runner(s) that is exiting a “key race.” When you have so many shippers, it is easy to overlook “local” entries that could be written off as “also rans.” I like the look of the pair that are coming out of the Slide Show 75k at Remington. Both Hits Pricey Legacy #7 and Morning Twilight #10 are young fillies who ran nicely for their respective barns … Trout and Asmussen. They have matched up against one another on 2 occasions, and might do so again. Jose Alvarez and Stewart Elliott know the MT like the backs of their hands, and I would not miss out on including them at prices that will more than entice. Speaking of invaders that tend to get major play in situations like these, I think we have to include Kenny McPeek’s Park On the Nile #6 and Brad Cox’s Golden Sights #9. The former broke her maiden on debut, never looking back at Churchill Downs in a MSW120k. Her odds were 21/1, and the daughter of Cairo Prince turned a bunch of heads that day. Former Governor Bret Jones bred and partly owns this one, and she has the chance to make it 2/2. As for the latter, Cox just got this filly by super sprinting sire Goldencents from the Brisset Stable, and her new outfit is very dangerous when it comes to the “1st start w/trainer” stat (146/25%/59%). The point … Cox spots them well, and finds ways to get the best out of them. Going 4-Deep in this race is the way to go. Now, as to Asmussen’s entry that is drawn outside … I am not opposed to including Optionality #12; however, class-wise, it might be a bit deep for her. By Gun Runner, I might rue the day for not including her, but here goes!

Here is the “feature” and the highlight of the Remington Meet … The Springboard Mile has produced some fabulous future stars … one will be the winner, but that doesn’t mean we will not see some of these down the road. When it comes to a top pick, it's close between a pair of entries … either Todd Fincher’s Bye Bye Bobby #3 or Steve Asmussen’s Classic Moment #5. Each one of these colts has some major plusses, as far as I am concerned. Fincher won this race last year with a well-bred 2-yr-old who absolutely loved to run on his own terms. Joey Peacock (owner) held his breath, as his colt spotted the field several lengths. But Fincher knew he had a big kick, and it looks like his son of Quality Road could be somewhat similar. When this one broke his maiden at Zia Park in the Juvenile 50k, he rolled late with Roimes Chirinos aboard. Coming back to Remington, you know Fincher would not be coming if he didn’t think he could win. Note … B-4 Farms spent $870k on this colt at the Keeneland Sept. Sale in 2020, so expectations are high. Lasix will be applied … As for Asmussen’s best play, he gives this one Lasix for the 1st time, and his son of Classic Empire improved from an MSW84k @KEE to a MSW120k @CD. Now, coming to Remington, the 2-yr-old gets Stewart Elliott as pilot, and I think he is ready to fire. Blessed with tactical ability, he can lay just off the lead, and give this Winchell T-bred a chance to strike. One other mention that seems appropriate, before we head to the OK bred finale … I am not enthusiastic about Saffie Joseph’s Make It Big #2. Sure, the colt by Neolithic is undefeated, but I do not happen to think that either of those races were terribly difficult. Jose Ortiz is a famous jock, but that is not a reason to back this colt. I am sticking with my pair!

As is de rigueur at the conclusion of horizontal wagers, we have a tough state bred race with a full field. Trying to find a “Single” here is like trying to choose your favorite child. Some are better than others in this ALLW Co. contest, so we need to be judicious with our selections. Among horseplayers there is this constant debate … should “pros” hit the “All” button? I think it makes sense, but only if chalks fail, and longshots save the day. Otherwise, you are cashing losing tickets. With “guaranteed money,” plus a Friday Night card like this one … we can surmise that the P4 Pool will be pretty juicy. As for a top selection, I am pretty keen on Sarah Davidson’s Wild Prospect #7. If you are not familiar with this conditioner, she is a good one that enters throughout the SW Circuit. I want a runner that has experience with these types, and gets a solid jockey. Danny Sorenson is a rider who has been around the block, and I think he can get this mare her 1st score of the year. I have some room for some other entries on this ticket, so let’s include … Magic Mindy #1, Seeing Double #3, Pearly #6, and Reba Country #11. Each of these have some upside, and their prices will be more than square. I am leaving off the M/L favorite, trained and owned by Mindy Willis (Tasmin #5), because I am concerned she simply does not have the class. Let’s finish off this glorious ticket, and get ready to watch how this unfolds! Ode to Remington …