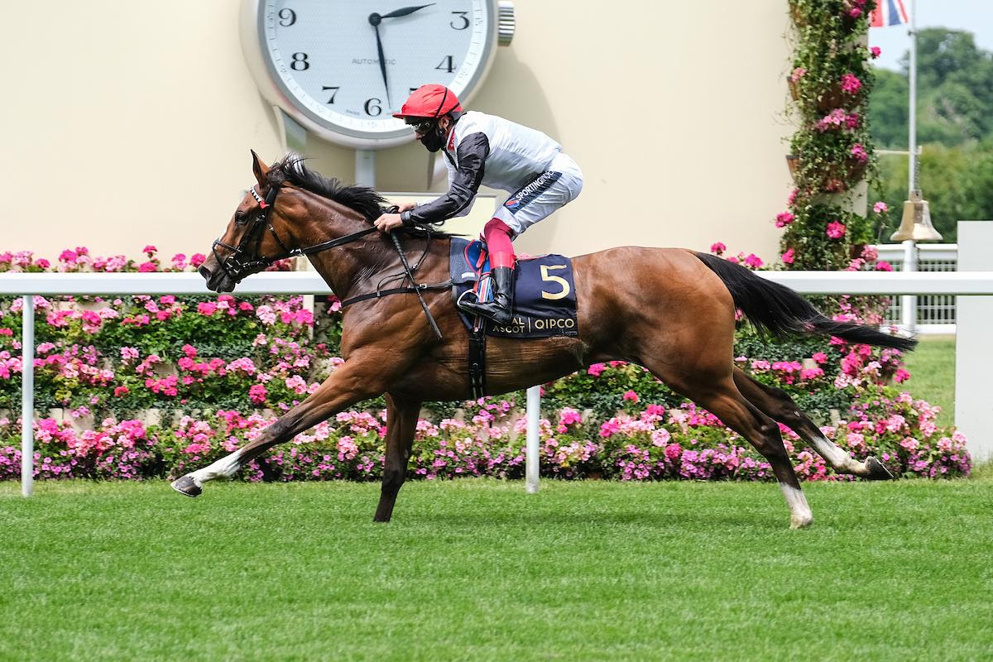 Day 2 at Royal Ascot arrives, and we have you covered with all the angles ... Will Wesley Ward's runner strike the front in the Group 2 Queen Mary? Read on ...

Over 5 days of racing at Ascot, on full display will be the very best that turf racing on the flat has to offer.

As Her Majesty the Queen presides over what is known as the Royal Meeting, we at HorseRacing.net/us have you covered when it comes to signature “tips.”

The Group 2 Queen Mary is the filly version of a speed round, and it has a large field of flat runners who have drawn in. The phrase, “don’t be afraid to back a price comes to mind.” Of course, to execute a plan like that one, is not as easy as one might think. Maybe the play is to finance the one that you like best. Not specious reasoning in the least …

In this race you could go with either of the American-based sprinters. Both have upside … Wesley Ward’s Twilight Gleaming #19(20) was dominating in her last performance at Belmont. She absolutely smoked 5 others, and with John Velazquez riding, the Stonestreet freshman has a strong chance. Remember, Ward is an Ascot specialist who places a strong emphasis on gate training. That is where he excels. Along with this runner, I also am partial to the Rusty Arnold entry, Artos (IRE) #1(2). Back at Churchill, this filly was fab against 9 others. Her conditioner has never made this trip, so it would be amazing to see his charge win her UK debut. The best news of all, he is getting one of the world’s best jockeys, Frankie Dettori. That is a welcome addition, after this rider has amassed quite a record at the Royal Meeting.

The U.S. runners are smart looking, but they do not make it to the top of my list. I have a pair of them … they include Aidan O’Brien’s Yet #22(16), and Andrew Balding’s Nymphadora #15(10). The former ran on the All-Weather at Dundalk, and though she won by only a neck, it was a win on debut. Now, with Ryan Moore in the irons, she could be a formidable factor in this sprint. As for the Balding entry, she is my tip top selection. She followed up her debut with a solid outing at York in mid-May. That was a better-than-average field of 12 others. She didn’t disappoint notching the victory in fine style. Jock Jason Watson is aboard again, and that should provide the filly with a steady hand.

Here is the bet …

This distance test includes Swinley Bottom over The Round Course, and for that, we should be eternally grateful. For you North American bettors, please remember, these deep routes require nothing short of extreme amounts of patience. Euro grass racing strategy is based on going nice and easy early, and then when the time is right, navigating traffic coupled with a sharp turn-of-foot. Those that can, have the best chance to win, especially when it comes to a photo finish.

In the Queen’s Vase there are a number of impressive runners. You could go with Aidan O’Brien’s entry, Wordsworth #14(5). Here is a colt out of super turf sire Galileo who is trying to graduate from a 2nd place finish at Navan last out. I am rather non-plussed by that try, and want to look elsewhere for some value. The same could be said for Mark Johnston’s Dancing King #3(1). This is a gelding out of Free Eagle who looks the part after going 4/4 in 2021. However, a pair of those races were on the AW at Wolverhampton and Kempton. I am not convinced that supporting him is the play here. Most will disagree, and I fully expect his odds to change from 9/1 to something hovering around 4/1. You could use both these runners who hail from excellent outfits, but I am much more bullish on another O’Brien entry. I am not talking about one of Aidan’s, rather in this spot I mean a 3-yr-old who is trained by son Joseph.

Even since he moved from the saddle to the other side of the rail, I have liked the work of Joseph O’Brien. He is even-tempered, strong on fundamentals, and has a great eye for entering in the right place. Ruling #11(4) is a colt who has much to build on after a couple of solid races at Leopardstown. If you can finish 3rd or better in a Listed race, then you have promise. Moving forward, he should appreciate some “give” in the ground. Oisin Murphy gets the call, and we will see if he can “settle” him. Big chance … and the price is right around 9/1.

This race, the Duke of Cambridge (tidbit … its current namesake is Prince William), is a short route test for older females. Some good ones have scored in this contest over the years, and this crop looks like a tough one to handicap.

The standout, if there is one, is Lady Bowthorp #2(7) trained by the Jarvis Barn. She was runner-up to Palace Pier back at Newbury in a G1, after winning her 2021 debut over rival Queen Power #3(2). If she is sharp, then she will be very tough to beat with Kieran Shoemark in the saddle. Likewise, the aforementioned Sir Michael Stoute 5-yr-old out of a Shamardat, is looking to improve on her 3rd place finish in this very race in 2020. She is fit, and I could easily see her crossing the wire first.

Though these 2 runners look inviting, I am more interested in Archie Watson’s Parent’s Prayer #11(10). Here is a 5-yr-old that will be more than a square price. Watson has some solid entries, and he is getting a superb rider switch by adding Hollie Doyle. She has made great strides over the course of a Pandemic-filled year, and she has much to be proud of when it comes to her coursework. This one is a bet, and will be at the top of my ticket. I am hoping for an easy lead, like she had back at Epsom …

Another Breeders' Cup "Win and You're In" contest, I would like to think that the Prince of Wales Stakes has come up as a pretty salty race, but I am skeptical. The field of 7 has some winners in it, but only Aidan O’Brien’s Love #7(6) and John Gosden & Son’s Lord North #3(4) look up to it.

I want to back James Fanshawe’s Audarya #6(1) after the mare embarrassed all of the American entries in the Filly and Mare Turf (G1) at Keeneland’s Breeders’ Cup. I just think she is going to need a race, and this is not the first-out 2021 debut you want. As for the other pair of high tote runners, I think O’Brien’s orange and blue clad router deserves a look. The filly doesn’t have the deep class experience of her rival, but she does come in hot with a 3-race win streak. Prepped well, she could get the better of the Gosdens.

Then again, I think Lord North notches this victory, and defends the title. The gelding out of Dubawi was excellent in Dubai in their Turf, despite a broken blood vessel. I expect a recovery from that, and he should have the ability to get home first with Frankie Dettori at the controls. The “Lord” has the balance sheet to go back-to-back. Turn a blind eye to the duo of Gosden-Dettori at your own risk …