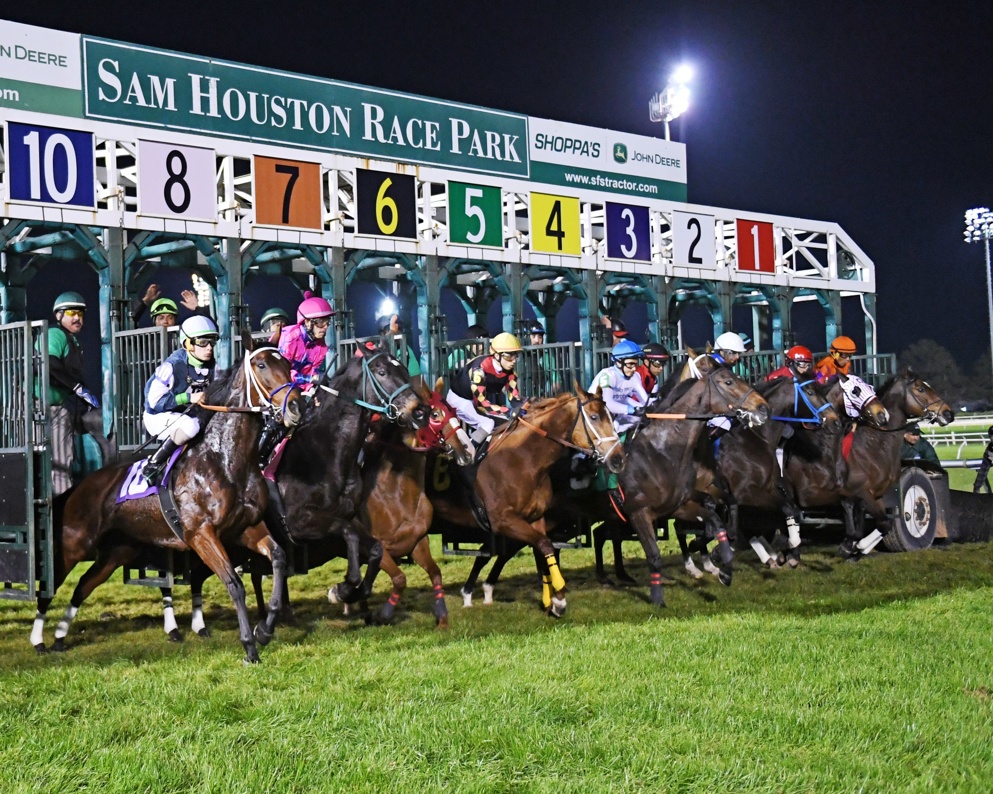 It is time to dust off those cowboy hats, and get your boots ready for some scootin'. The reason I am talking like this ... it can only mean one thing ... it is time to go racing at Sam Houston once again.

With low takeouts at 12% for wagers like the Daily Double and Pick 3s, 4s, 5, and the Space City 6, there is absolutely no reason to not be playing at "Sam." Kicking off Opening Day, I have a .50 Early Pick 4 Ticket that will keep your budget under control. Take a look below ...

Sam Houston Race Park has a crack staff led by Dwight Berube, Frank Hopf, and Don Ahrens. These are professionals that know their business, and produce a wonderful product. SHRP highlights coming your way include the Houston Racing Festival (scheduled for Sunday Jan.30), which is anchored by the Grade 3 Ladies Classic. Texas Champions Night is a showcase of the very best the state has to offer.

With the excellent John B. Connally Turf Course, great fields, and a solid purse structure, the team in the Bayou City is ready to trot out a fabulous Meet. New track announcer Nick Tammaro is poised to bring you every moment from atop the Grandstand, and he joins Trey Stiles for "SHRPe Time" before the commencement of each card.

At Horseracing.net/us we have you covered, including all of the action from SHRP! It is a good time for some of the best that North American racing has to offer. Stay tuned! If you're looking for picks elsewhere around the country this Thursday be sure to check out our free Horse Racing Picks via the gold button below. Do not forget to follow us on Twitter ... @Horseracing_USA ...

I am attacking the early Pick 4 sequence on the SHRP card, and it looks to be a good one with some field sizes that include at least 8 runners. Leading off in this 2nd frame is a tough MC tag event that looks like it could go in several directions. I would like to trust Brian Williamson’s Hush Hush #3. She is a 4-yr-old homebred by Straight Line, and she got her debut out of the way up at Turfway Park last out. Clearly, she understood what was going on, since she ended up 2nd. However, she lost by a nose, so you could interpret that either way. Williamson is adept at running in locations like Churchill, so he knows his business. Probably the best news is that Stewart Elliott has the mount, and we all know how well he rides in Houston.  Just in case this one doesn’t make it to the winner’s circle, I also want to use the Whitelaw Barn’s Bering’s Special #6. This is an Oklahoma bred that already has a pair of MSW Co. under her saddle. She hit-the-board in her debut, and was 4th in the other effort. Coming to SHRP might do her some good, as she drops down to this level. Going 2-deep seems sensible in this race, and helps give us a pair of options … even though they both will probably be fairly short-prices on the tote. I would use the Saddling Ring as a research lab, and get a good look at both these entries. Always a good tool before going horizontal …

The Texas breds are out in force this time around, and this lot are a bunch of 3-yr-old fillies. Like the Remington and Lone Star Meets, Sam Houston feels the presence of North America’s all-time leading trainer, Steve Asmussen. He has won more titles “than Carters' got pills.” You can bet his entries will be well-backed and ready to run. I am hoping that Expect the Boss #3 is not one of those. The last time we saw this filly was @LS in the Texas Thoroughbred Futurity. That was a “Place” that day, and I am sure bettors will like the fact that she ran on so well. I want to play against her, and hope that she needs a race. Much can happen over the span of 6 months when it comes to development and maturity to the positive, but one’s level of fitness can be a real stumbling block even for the talented. Instead, let’s back the venerable Ronnie Cravens, and his entry, Ima Sky Traveler #2. Here is a Remington shooter that already has a pair of MSW Co. to her name. The Lone Star Racing Club is itching for a win on Opening Day, and with Jose Alvarez piloting, they might get it. Cravens has deep experience @SHRP, and he will get his share of wins from Jan. to Apr. One other filly that looks inviting is actually two. The coupled entry, trained by Karen Jacks, looks too good to pass up, if both make it in. Both Imaluckycharm #1 and Texas Thunder #1A are well-bred by My Golden Song and Bradester, respectively. Jacks comes to play every year, and I would trust Rich Eramia and Nesto Valdez-Jiminez because both know this MT like the proverbial back of their hands. Using them makes a ton of sense …

It is tag time again, and this is a claiming game race for older females going 7 on the MT. Shooting out of the gate, I particularly like the look of J.R. Caldwell’s Queen of the Lane #8. In fact, I am so confident that the mare by Algorithms is going to fire, that she is a clear “Single.” Back in November she competed at the ALLW Co. level up in Oklahoma City, and did not do poorly—3rd. Her speed fig was more than adequate, and I liked the way she came off-the-shelf. The able-bodied Lane Luzzi gets the call, and it will be great to see him back at SHRP this time around. With prior races at the Fair Grounds, she should be able to handle this field quite readily. “Single” …

Arriving at the finale of this early play, I have already whittled this one down to a pair of runners. There is nothing better than a grass race on the coveted John B. Connally Turf Course. This inaugural contest on the green has numerous options, but for me it comes down to Karl Broberg’s Screwball #1 or Danny Pish’s Revenir #6. If you are not familiar with these barns then it is time to sit up and take notice. Broberg regularly comes to Houston, and wins at-will. Last season, he scored on the turf on Opening Night with a horse named Good Fight. The rider? Ry Eikleberry … who once again is his jockey in this spot. A LA-based pilot, he has a great sense on the turf, and I find him to be clever. This is a horse that is looking to get back to what he clearly did best—route on the grass. Back in September, this colt by Empire Maker did just that up at Canterbury Park in Minnesota. A return to the surface could be exactly what he wants to do … Let’s not leave out a discussion of Pish’s move. A solid conditioner, he makes his presence felt in H-Town, and could easily win with his gelding by Hard Spun. Folks will back this colt when they find out he ran against Saffie Joseph’s Make It Big in the $400k Springboard Mile. Even though his entry was well off-the-pace, ending up 6th, that kind of experience can be helpful. The Hard Spun types are versatile, and have a history when it comes to taking to the grass. His form speaks to rating nicely, and taking up stalking positions. We cannot leave this one out, unfortunately … Still, this economy ticket looks grand, and could bring us a nice score! Let’s play Sam!