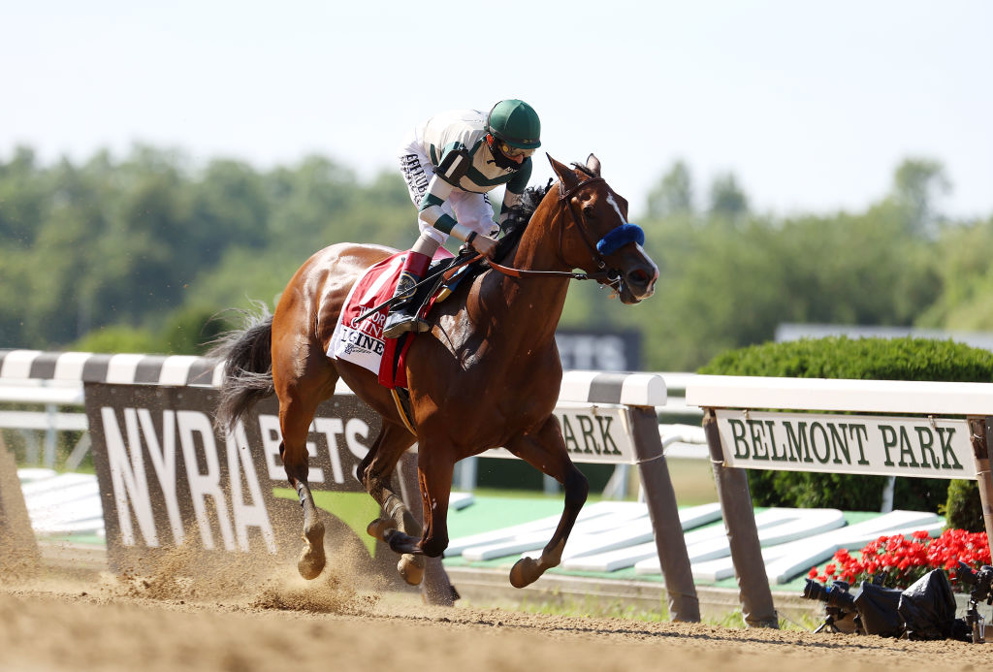 Last year, Bob Baffert and John Velazquez paired to score in several major races aboard runners like Authentic and Gamine (pictured above). They are at it again in the Grade II SA Oaks. Have a look at J.N. Campbell analysis below.

With Kentucky Oaks Points on the line (100-40-20-10), and alums like Swiss Skydiver and Midnight Bisou, this race, the Santa Anita Oaks (G2) is a West Coast coronation for some of the best fillies in North America. This year, with a small field, they will compete for a trip to Churchill Downs, in hopes of winning the signature event on the “Last Friday in April.”

Mike McCarthy continues to expand his vision for a stable that can stretch into every division in the game. Now into the Derby-Oaks Trail, he has a couple that should vie for entry into one of those celebrated races. The Don Alberto Stable has employed him to shepherd this daughter of Empire Maker through the Oaks highway. She really has done little wrong, hitting the board in all of her efforts. The last 2 tries were G3s that pipe into the SA Oaks (G2). In the last one of those, she was nailed at the wire by Baffert’s Beautiful Gift #5. Umberto Rispoli will not let that happen again.

Doug O’Neill’s filly ran in those same 2 G3 races that McCarthy’s did. The results were a bit different, in that Ricardo Gonzalez hit the board in one and missed in the other. This daughter of Speightstown got some redemption in an OC100k contest on the turf, that her conditioner used as a fitness tracker. That 2nd with Rosario aboard will not necessarily assist when it comes to heading back to the dirt into a longer route. Adding Abel Cedillo to the mix now could assist, but the question remains… can she extend to this distance?

Trainer Mandella has an inexperienced filly with only 1 race under her belt that will be drawing in here. Here is to hoping that this daughter of Distorted Humor can raise her game significantly to match up with what is clearly a better class of horses. Her experience may flounder, and thus, be a major weakness. Maybe Flavien Prat can send her to the lead, and she can steal this race because that is the only way I see her winning it. A similar problem exists for her—major stretch out.

I do not think I could name a Godolphin runner that Mike Smith has ridden along the Derby-Oaks Trails. He is pairing with Eoin Harty in this G2 contest, and a trip to Churchill is on the line. This conditioner can surprise you, and even though he is not a “regular” out in SoCal, he has game. Last out, this Medaglia d’Oro filly took on the boys in the El Camino Real Derby 100k, and she acquitted herself well—2nd to McCarthy’s Rombauer. Some might look at her series of 2nd Place finishes (4 in a row) and scoff, but I think they show progression. What her conditioner has done is slowly but surely build a nice class rating. That could be useful for this race and beyond.

You are going to get 2 legendary jockeys in stalls #4/#5… they are leaders in the sport too—Jockeys’ Guild. Facing off again, it looks like Johnny V/Bob Baffert have an ace. This Medaglia d’Oro filly graduated from MSW55k Co., and she headed into the Santa Ysabel (G3) with much promise at 3/1. That is where she scored a wire victory against Moraz #1. Off that effort, and because of who her conditioner is, she will be the favorite in this race. Baffert’s spotting continues to excite and amaze. I would not doubt that Johnny V guides her down the lane to victory in the SA Oaks. Her fitness looks stellar.

Join us Saturday for all of our Santa Anita Park Selections! Should be a fabulous day at “The Great Race Place!”