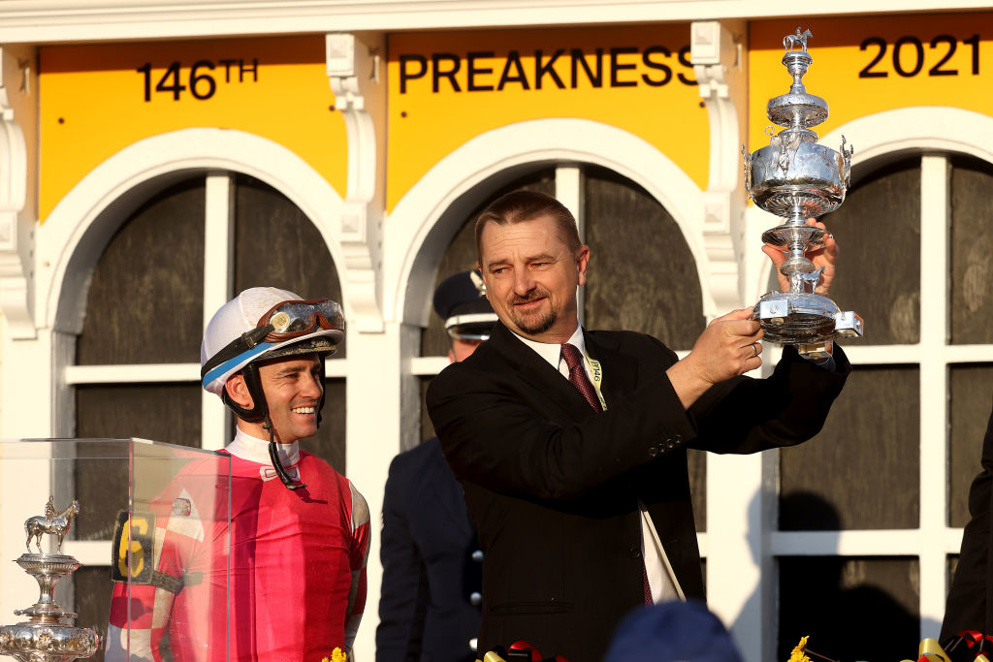 The Preakness dynamic duo of McCarthy (trainer) and Prat (jockey) will not be reunited on this Santa Anita Saturday, but that does not mean each will not have a chance to enter the winner's circle. Check out our picks and analysis below ...

A adroit 8-race program will test you today as another Saturday afternoon at Santa Anita unfolds. The card features the Grade II Santa Maria Stakes and the Grade III Honeymoon Stakes. As usual, our turf-man is on hand to break down all the action, with detailed analysis of his best value plays to go along with picks for every race.

This is a unique early sequence on the Santa Anita card because it is not often we see a P4 frontloaded like this. It appears that 3 of the 4 are high-end AOCs/Stakes races, and that should make for some great competition. Heck fire, the anchor portion, a claimer, will be no piece of cake.

In this 1st Leg we have a salty group of fillies that are routing short on the grass. I am actually not that interested in any of the presumed favorites because they all have issues afoot. Take for instance, Tetragonal #5, who had nothing last time in the Senorita (G3). She finished well-back of Madone, who is a runner later in the Honeymoon (G3). I want to toss her out, but I am hesitant because Richard Baltas does get leading rider Flavien Prat aboard. Still, I am not sure I trust her on the drop down.

I am also wary of Paddy Gallagher’s Styledome #6 because though he had some nice energy last out in a “Non-G” at Golden Gate, that may not be enough coming down to SA for this one. Looking over her Irish form back at hallowed grounds like Nass and Dundalk, she was running against some lower company. I do not care for her chance here.

Instead, I want to nom an entry like Doug O’Neill’s Plum Sexy #3. I have backed her in the past, and she has some quality starts under her belt for the trainer. Sure, her 2021 is nothing to write home about, but she is going to be an excellent price, and there is some form in her background that should not be overlooked. Adding the blinks is a solid move, and I do not dislike Abel Cedillo on the turf. He is not terrible.

Let’s toss in Prat’s mount, and also Paddy Gallagher’s other runner, Jibber Jabber #1. She gets Umberto Rispoli, and he is no slouch when it comes to mowing down those in the lane. I think 3-deep should cover us.

With the early scratch of Last First Kiss #1, that makes this a 4-horse race for these older gals, and I would expect this to be a street fight as we head towards the wire. Once again, it will be Bob Baffert (America’s most beleaguered trainer) versus Mike McCarthy (America’s most darling trainer). Baffert sends As Time Goes By #5 to the post, and he is hoping she can turn around the worst period in this HOF-er’s existence. The filly should do well, especially after running so well last time in the Santa Margarita (G2) back in late April. With Mike Smith aboard, she was in command from start to finish. The only miss in 2021 was her 2nd place finish in the Beholder Mile (G1) to Swiss Skydiver. She will be formidable, but not insurmountable.

As for Mike McCarthy’s entry, it looks like Ce Ce #4 has all sorts of upside after she turned in a highly-successful 2020. Though she failed to hit the board in the BC Distaff (G1) at Keeneland, that was always going to be a tough race. Running against the likes of Monomoy Girl (who won), and Swiss Skydiver, plus Valiance, was a very difficult proposition. Running in this race last year, she finished 3rd to Fighting Mad, who was incredible, back-to-back. I would like to think that McCarthy has this mare headed in the proper directions after she started her 5-yr-old campaign in April with a bang and a win in an OC62.5k match. She has the throttle and the guidance of Victor Espinoza behind her. Big chance to beat Baffert’s princess. It is a “Single,” for me …

Halfway through this gauntlet, we have enough padding left where we can make some deeper decisions. I want to save some dry powder for the finale (and some mixed metaphors), because I know it is going to be a tough one. Turf sprinting is the bet you never want to have to make if it is a large field, so this one is a bit easier since we only have ½ of what is normally drawn in. I want to keep this fairly simple. Trainer Peter Miller knows turn and burners, so I am going to use both Nimbostratus #2 and Feathers #6. They both look quick, and should end up being a couple of square prices. Miller has the former dropping down, and that should suit since she did not show any affinity for the Senorita S. (G3) distance. More of a sprinter through-and-through, I like some of her prior races. Getting Abel Cedillo is going to work out, I am sure. As for the latter, the ever-hatted Miller has her fresh from time off. Having Flavien Prat ride is a deal, but I like her works most of all. They look swift, and she could be ready to start her 3-yr-old season. The Blinkers and Lasix should give her an added couple of edges. Miller time … all the way!

Ending on a dirt sprint might not sound that inviting, but trust me, it can always be worse. I actually like this race quite a bit because it caps off a nice sequence. If you are looking for a sprinter who like to move quickly up front, then maybe Vann Belvoir’s Outlaw #1 is your type? This experienced gelding tried the straights of Los Al, but he does know the SA MT too. Jess Pyfer gets aboard once again, and she should be able to get this one into contention.

I also like Manny Ortiz’s Satchel de Ritches #2 because you can never count out Edwin Maldonado’s effort in these places. He can still ride with the best of them. Ortiz took this one off of Bob Hess’ hands, and the 2nd time out could go much better than the first. Along with these 2, I cannot leave out a fan-fave named Octopus #4. Though he only has 4 appendages, and not 8, this Shackleford star is a grinder. Now he joins Doug O’s able outfit, and I am absolutely pleased as punch about that! The colt still has much to do, and maybe his new trainer can get him back up to some higher company. He can do it with Abel Cedillo at the controls.

Lastly, I want to toss my support behind a winner like Black Storm #5. Jeff Mullins has this Treasure Ride gelding coming off a win @SA back in April, and he moves up into this spot if he can keep those speed figs in the middle to upper 80s. Big chance to make it 2 for 2 in my book. Going with the quad here in the last frame should get us the strike we need to cash this ticket. Bowling for dollars …

Some celebrated trainers have headed to the Santa Anita Winner’s Circle in this race over the years, and this time around should be no exception. Richard Baltas, Peter Eurton (who had a super long shot with Cheekaboo in 2016), Mike McCarthy, and Peter Miller have all enjoyed success.

Looking through this year’s entries, can anyone best Phil D’Amato’s ace, Going Global #6? There is not a horse this side of the Atlantic that has, so far. In 3 tries, all at Santa Anita, she has powered through to victory. The well-bred turfer out of Mehmas (IRE) is looking stout, and of course, deserving of that 6/5

The only antidote I can come up with is to back the second-choice, Simon Callaghan’s Madone #7. Out of Vancouver (AUS), this filly has already come off-the-shelf with some jazz in the Senorita Stakes (G3) back on KY Derby Day in SoCal. That score was impressive, and really proved that she could take some of her success from last year, and build on those accomplishments. That is not easy to do, but getting JJ Hernandez to guide her, should make for more than just an average attempt. Going toe-to-toe with Prat should give JJ yet another chance for some pride points … Prat currently sits at 102 in the standings, with Hernandez in a distant 2nd place at 70. It is safe to say, that the former has owned the latter. Maybe it will not be the case in the Honeymoon.

Enjoy some action from “The Great Place!” The tradition of Saturday at Santa Anita continues…