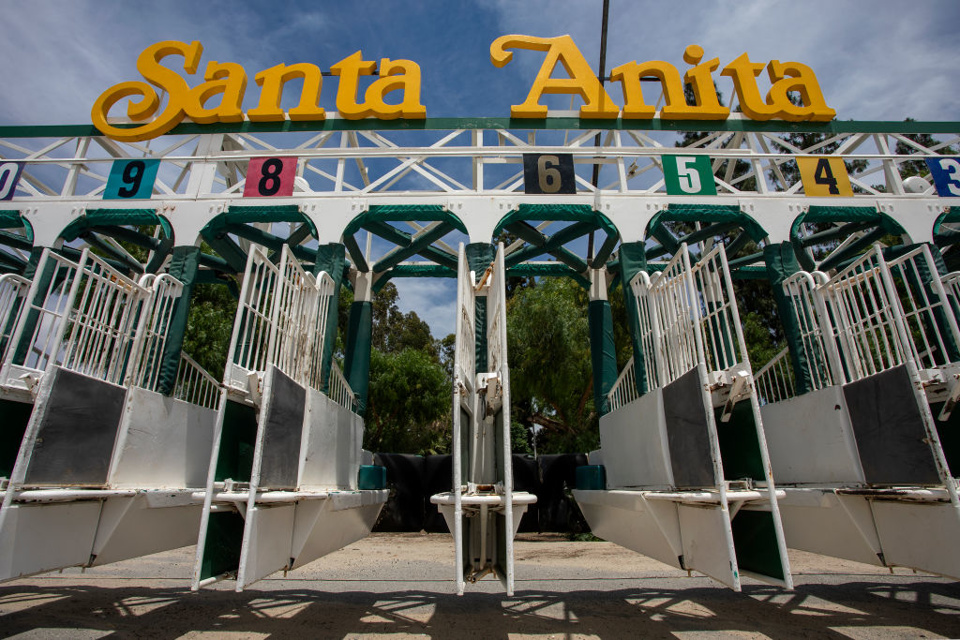 Opening Day at Santa Anita is upon us! We have you covered with all of our selections, plus a look at the key stakes action! "The Great Race Place" is back ...

The Opening Day of the Fall Meet at Santa Anita is here! There are sure to be some nice prices in what amounts to a strong 9-race card. Featured will be a number of stakes races that have both Breeders' Cup and Kentucky Derby/Oaks implications. You will not want to miss any of the action!

Check out these selections and some targeted analysis from J.N. Campbell. If you're looking for picks elsewhere around the country this Thursday be sure to check out our free Horse Racing Picks via the gold button below.

There are not many Breeders’ Cup Challenge Series races that feed into the Juvenile Sprint (G1) … but here is one—The Speakeasy S. $100k. When it comes to spots like these with entries having very little in the way of form, I look for a runner who is well-bred and out of a solid barn. Richard Mandella (who has a “few” BC wins to his credit … lol) has this son of American Pharoah headed in the proper direction. Invested in by the legions of MyRacehorse fans and the excellent Spendthrift Farm, there is no question that this 2-yr-old is on the make. Juan Hernandez is back aboard, and he piloted him wire-to-wire, as he broke his maiden 1st time out back on the dirt at Del Mar in a MSW70k race in August. A repeat performance could very well be in the cards, if he can take to the turf (Pharoahs do) … with a return trip to DMR on the line!

On Opening Day, we find ourselves among the 2-yr-old fillies … at stake … both a trip to the Breeders’ Cup Juvenile Fillies (G1) in November, and Kentucky Oaks Points (10-4-2-1). In this spot—$200k Chandelier S. (G2)—I want to turn my back on Bob Baffert’s pair of entries (the Churchill 2-yr ban keeps them from garnering points anyway), and focus instead on John Sadler’s filly out of Daredevil. She broke her maiden on debut in fine style back at Del Mar in late August, winning by 8+ lengths. Joe Bravo is back, continuing his SoCal sojourn. This runner took over the race on the backstretch and never looked back. In here, she should be able to build on the fine effort. After 3 solid works in September, she seems primed for a “graded” score, after posting that all-important speed fig. in that MSW70k event.

Back in the old days (roughly 7-8 yrs ago), when jockey Drayden Van Dyke was a bug boy and learning the apprentice trade in the saddle, he was a formidable player on the Hillside Course at Santa Anita. The kid knew how get his mount into the proper position, and as he brought them across the dirt track insert at the bottom, was all too ready to kick for home. With the return of this G2 event to this specific course after a hiatus, I am picking this Florida bred with Van Dyke riding because they both know how to handle this distance and these conditions. In other words, they have been here before. As a son of City Zip, he is predisposed to enjoy the grass, and shortening up after running at Gulfstream. A quick survey of those recent works looks awfully good too. Trust in Mike McCarthy because he is having a banner year …

The Santa Anita Opening Day is a barnburner when it comes to “graded” races with “playoff implications.” In this race, like its counterpart Chandelier S., this one is a major contest … another highlight on this Friday. Hope springs eternal for these colts as their connections are looking to grab both a ticket to the Breeders’ Cup Juvenile (G1), and Kentucky Derby Points (10-4-2-1).

As for Bob Baffert’s play in this “signature” race, he sends Corniche #1 out of Quality Road, a son of Gun Runner in Flying Drummer #2, and a Medaglia d’Oro colt named Rockefeller #6 to the post. With nearly half of the field in Baffert’s care, it would be easy just to back any one of these 3 entries. After all, each of them ran well in their debuts, and each are ridden by accomplished jockeys—Big Money Mike, Johnny V, and SoCal’s leading pilot, Flavien Prat. What I want to try and do is beat them all, and I think I have a suitable pick in Brian Koriner’s Joker Boy #5.

I have spent a good bit of time extolling the virtues of his sire … one Practical Joke. The offspring out there have torn up the tracks across North America, and they are looking better and better as the year goes on. Undefeated in both his debut, and his follow-up attempt (@DMR), his conditioner saw his speed fig rise in early September. Coming in 3rd in this cycle, the situation is looking like even more promising when it comes to backing this one, and I am hoping that he can build off that “Non-G” $100k race he won. It was a sparkling performance to be sure. The 3rd place horse in that race already came back and won, so there is upside here in spades as veteran Edwin Maldonado takes the controls once again.

At a price of what is sure to be double-digits on the tote come post time, this is one to take seriously. If he truly has tactical ability, then that could be just the ticket against the Baffert Brigade. A victory for Koriner would be awfully sweet …

Enjoy some racing from wonderful Santa Anita! Best of luck on another run at “The Great Race Place!”