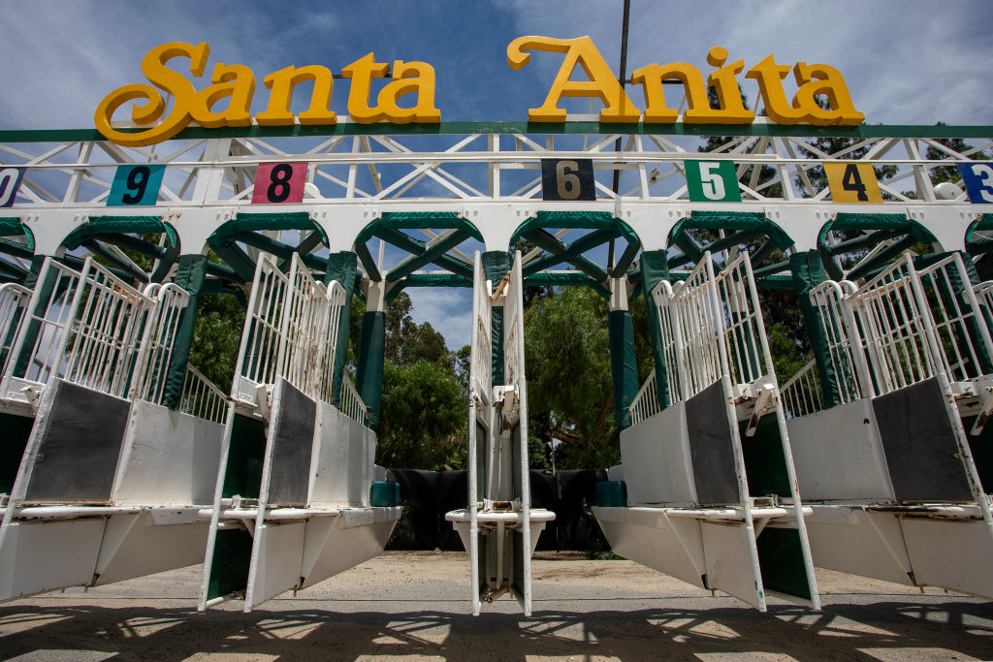 The Grade I Hollywood Gold Cup is the "feature" of the Memorial Day Card from beautiful Santa Anita. See who shows to claim the prize in this annual renewal for greatness ...

The signature anchor to the weekend is the aptly named Hollywood Gold Cup. Harkening back to England, the race brings together the very best that the sport has to offer, just before the Santa Anita Meet closes its Winter-Spring Meet doors. Past winners have included 3x winner Lava Man, 2x winner Game On Dude, Majestic Harbor, Hard Aces, Accelerate, Vino Rosso, and last year’s winner, Improbable. Who will join this excellent group of recent legends? It will take a horse’s best to contest this distance!

When he arrived in the U.S. last year from his native Brazil, this son of Midshipman started out on the turf at Del Mar. In 4 tries since, all with Mike Smith aboard, the gelding has switched back-and-forth between the dirt and the grass. If at first … Last time in the Californian (G2), Richard Mandella finally struck gold as his gelding kept close and delivered a win by a neck. Posting a speed fig of 106 probably made the Fox Hill/Siena connections swoon. Now, they are dreaming big … it probably isn’t as realistic as they might think.

Trainer Bob Baffert needs a win. He pairs with Winstar Farm to try and get this colt home. Last out, he lost by a neck to Royal Ship #1. Previously trained by Chad Brown, this son of Tonalist has talent, but it is unknown at this point just how he will do ratcheting up. The addition of Flavien Prat is a bonus, of course, as he rides this son of Tonalist for the first time. If he can harness that spirit that he possessed back in the Peter Pan (G3) last year, then he could be on his way to being one of Baffert’s best older males. Then again, he may not measure up …

Trainer Mike McCarthy is still on Cloud Preakness, but being the consummate professional, he was back to work the day after. In the Gold Cup (G1) he sends a pair of runners into the mix, and I am sure he is hoping that one of them will bring home the victory. This Scat Daddy router actually tried this race last year and just missed the board. As primarily a turf router, he is switching back for this contest. It must be the connections who are insisting on this … am I right? This will not turn out well, even with Umberto Rispoli aboard. Though he has won 4 lifetime races out of 20, those all came in Chile.

The power of Hronis Racing continues to churn out entrants, and they have this class elevator who is going to move from an OC62.5 contest into Grade 1 Co. That might seem like specious reasoning, but this is a member of John Sadler’s Barn. Though he has had some bad press lately, Sadler keeps on trying to move forward. If Tyler Baze can keep this one close to the leaders, maybe he can have a shot down the lane. This son of Speightstown does have the ability to graduate, and you know he is going to end up more than a square price.

This accomplished son of Liam’s Map was impressive last year along the meandering Derby Trail. No runner in the modern era would have the chance to compete in both the Blue Grass (G2) and the Santa Anita Derby (G1). It simply isn’t possible since they fall on the same day. COVID-19 changed everything … In the new year, Mike McCarthy has him going in the right direction after a successful debut in the Oaklawn Mile 400k against By My Standards. That 2nd place finish could have easily gone his way. Now, with Jockey McCarthy in the saddle and solid works under him, the colt is primed to score his first Grade 1 victory. Big chance coming his way …

Trainer Doug O’Neill is taking a former Peter Miller charge who was last out in a claiming event, and tossing him into a Grade 1 shark tank. I am not sure what the intention is here, but this conditioner is never shy when it comes to risk. Jockey Abel Cedillo has some experience riding this gelding, so that is a major advantage. O’Neill claimed this one for himself, so his motivations clearly are to do what is best for his investment. Cannot fault him there … still, so much to do for this 7-yr-old gelding out of Stay Thirsty to have a chance.

Trainer John Shirreffs has had his share of celebrated runners over the years, and this one, a colt out of Union Rags, is near the top of the heap. His lifetime winnings add up to nearly $353k, which is impressive to say the least. His conditioner has sent him up against the likes of Silver State, Idol, Charlatan, and the list goes on. The Oaklawn Hcp (G2) was a miss last time out, so it will be interesting to see how JJ Hernandez handles this situation. It is time to get back on track. The 4-yr-old can find himself in the Winner’s Circle at Santa Anita. He has the speed, power, and grace to make it happen. Shirreffs could use a win …