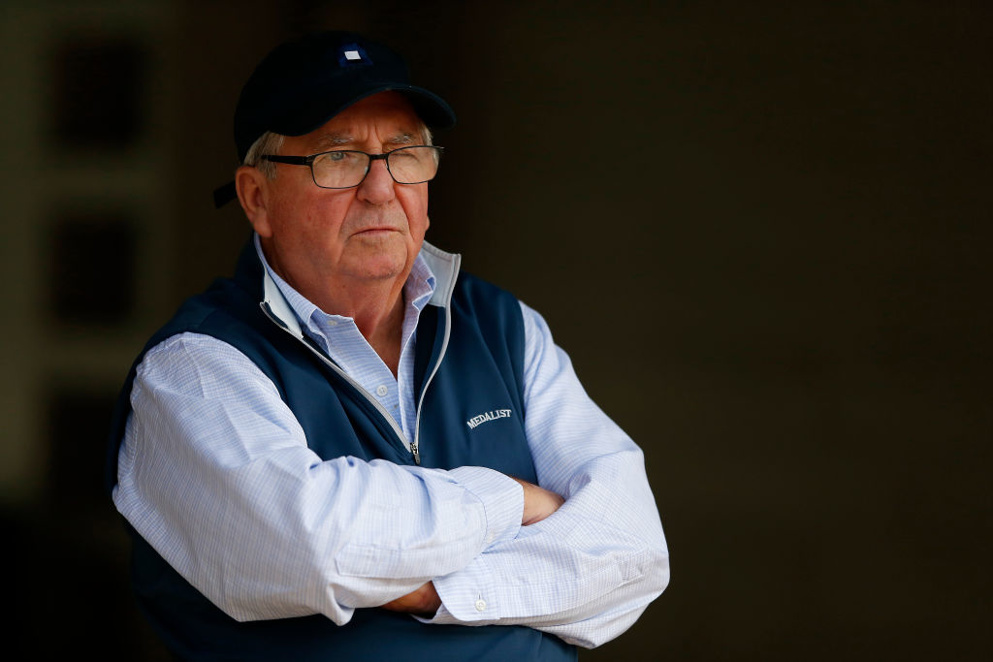 HOF Trainer Shug McGaughey has an excellent entry in the "featured" Curlin S. today at Saratoga Racecourse. See what his chances are like, as J.N. Campbell surveys the entire card.

Summer at Saratoga continues this Friday with a quality card ahead of a tasty Saturday slate. J.N. Campbell brings you his thoughts ahead of the action.

With a number of longer dirt routes on the docket for Friday, it should be a rousing good time to handicap. I like this spot because it puts 7 older, more experienced runners against one another. Trainer Wayne Potts has the presumed favorite in Control Group #6, who looks the part after winning at Belmont at the 1 Mile distance. At a similar class level to this spot, most will gravitate to this 7-yr-old out of Posse. That’s not a reason to just blindly back him though, especially since we are now at Saratoga, and he is stretching out to a much longer distance. One counter to those assertions is that he does have 4 wins over the MT in 7 tries. Not too shabby at all as Javier Castellano rides.

Along with the Potts entry, Linda Rice’s Too Early #4 might not have the most appropriate name for a racehorse, but the gelding has a ton of upside. Ridden by Jose Lezcano, the Distorted Humor 4-yr-old lost by a bob of the head last time out at Belmont in early July. He was a short-price that day, as Three Jokers got the best of him. The Edition Farm homebred will be coming back to the SPA after amassing a record of 1/2 over the MT. I am not at all against putting this one on top because logic speaks to the ability to win, but like the other fave, the price is not that inviting.

As an antidote to all these small numbers that will invariably bring even more miniscule returns, why not play a higher-priced long shot that could be making a comeback? I like Todd Pletcher’s Fort Worth #7 since this is a runner that is owned by Bass Racing. If you don’t know much about Ramona Bass, you are missing out. Her contributions to the sport are numerous, and over the years she has had some real ringers. This 5-yr-old out of City Zip is capable, even though her recent record is not overtly stellar when it comes to finishing in the money. Named after where the “West Begins,” he will appreciate the swap to moving north from Belmont. I like this angle, and with Ricardo Santana aboard, he is going to be a double-digit price for sure. If he can handle the distance, then this could be the pick of the day!

Here is another distance test, and it is going to be a tough one. With a much bigger field than Race 4, that should be an inviting betting opportunity, as long as opinions abound. We have 2 groups of runners that are coming into this spot; some hail from New York and those that are invading from Churchill Downs. Chad Brown is really the only New York-based trainer who has one of those interlopers. That gelding is Winter Pool #6, and in typical Brown fashion, he is capable of scoring. He made a nice motion forward from an MC50k event into a race just like this one. Only losing by a head is not too bad, even in defeat. Jockey Ricardo Santana will be aboard for a 3rd time, and that makes sense for any horseplayer to back him.

If you are looking for another Churchill invader, since that angle is hot right now, then you could put a good bit of support behind Dale Romans and his colt out of Super Saver. This one could offer some value. Southern Passage #10 has the back class to fight here, and he should be primed to get back to the dirt. He was in the Florida Derby (G1), Matt Winn (G3), and a slew of other upper-level OC/ALLW Co. contests. Though he was at Saratoga last year, it was as a 2-yr-old, so his maturation process has had adequate time to develop. Romans has lost a step as far as I am concerned, but I am never just willing to spurn one of the members of his barn. His experience and ability still remain. With Manny Franco in the saddle, this colt looks like he could end up being a price come post time.

Switching the turf on this “distance-focused” Friday, we have one of those grass routes that is always exciting to handicap. Remember to check the forecast, in order to appraise the “softness” of the Inner Turf. It could be a factor. As for the field, most of the bets will be laid on Chad Brown’s Compliant #8. The Klaravich red-lettered “KS” will be rating near the lead, and this well-bred “Kitten” with Jose Ortiz riding, should be very well liked.

That is not a reason to just bet him, even with Brown and Seth Klarman behind this one. For some better value, you could look elsewhere. For instance, I am pretty stoked about the style of Jonathan Thomas’ runner, Box N Score #10. This gelding is a distance specialist who knows how to handle longer routes. Though he has not won since he broke his maiden way back in October 2019, I wouldn’t say that he has competed all that much for owner Robert Lapenta. Being lightly-raced could be an advantage ... Thomas is an expert at choosing spots, and though he doesn’t have an expansive stable, does disseminate a great product. Maybe Manny Franco, who climbs aboard again, can win the day? Will see …

The last entry I would seriously recommend is Christophe Clement’s Royale #9. With Joel Rosario aboard, he is attempting to win back-to-back races for Cheyenne Stables. The gelding is talented, probably more so than his 8/1 M/L odds let on. With connections through the dam to Dynaformer, this one is a bet, if he can make the class jump. He has already proven that some “give” in the turf is to his liking, and with Rosario at the controls, you know he is aggressive enough to handle any situation.

Another note that should be mentioned … if this race is off-track, and Claytnthelionheart #11 draws in, you might want to put him on your ticket. He is an entry from Philip Bauer’s barn that has some massive speed figs. Bauer has already made some noise at Saratoga, and could be a force as an MTO.

The last route on the dirt that we will examine today is the Friday “Feature,” and it is named after one of the greats—Curlin. Not only a power runner, he has also become an amazing sire. Not a surprise … In here it would be fitting if one of his offspring won this “Non-G,” wouldn’t it? Out of these 7 that are going 1 1/8th, Chad Brown’s Miles #1 and Shug McGaughey’s First Captain #4 both qualify for this distinctive bloodline. There is no question that the latter is a superior runner, and is one of the few horses in all of North America that is undefeated. He has 3 wins under him, and the score in the Dwyer (G3) is well-remembered. Today’s race is actually a class drop in a sense, and Shug must have something strategic up his sleeve. It could be a “filler” race (like playing hopscotch), in order to get to something that is further down the road. The colt should win, with Jose Ortiz in the saddle. His inspired riding looks pretty impressive as he is near the top of the standings @The SPA.

If you don’t want to take that price, nor the other Curlin I previously mentioned who is short on class, you could hop on Todd Pletcher’s Dynamic One #7. Most ‘cappers will recognize that name from the Wood Memorial (G2) when Todd Pletcher went 1-2 with Bourbonic and this long shot. Although he wasn’t the massive price his stablemate was at Aqueduct, it was still impressive. Now, the Repole and Phipps-owned colt out of Union Rags is starting his post-Derby career. Sometimes this goes splendidly (Palace Malice), while other times it is a huge flop (Country House). Irad is aboard, so we shall see.

One other that I quite like is from the Brisset Barn, and he is coming into this race with a pair of wins. Harvard #3 has the pedigree in name and from Pioneerof the Nile to raise his game into this type of company. I like his WinStar Farm connections, and of course, the addition of leading jockey Luis Saez. He won on the frontend at Churchill Downs last time out at this distance, so he should be one to watch. These invaders are formidable … Let’s include him for sure!