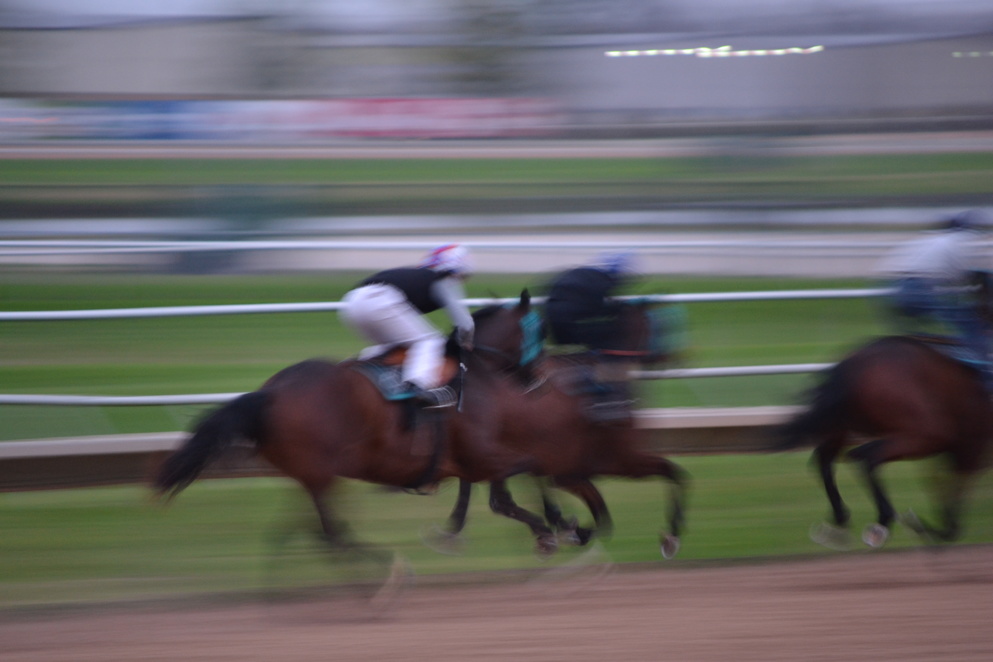 A blur of speed and power on a Thursday morning, Todd Fincher's home-bred Señor Buscador, works at Sam Houston Race Park in preparation for his 2021 debut in the Feb. 13 Risen Star (G2) at the Fair Grounds in New Orleans. His trainer formally announced the decision, as this son of Mineshaft heads out on the Kentucky Derby Trail.

On a temperate and cloudy morning, just as the sunrise was trying to find a seam through, there, round turn 4 at Sam Houston Race Park (SHRP), a son of Mineshaft rolled along. You can tell it is him because he is working with 2 others from the same barn, Todd Fincher’s.

Like a roving motorcycle gang, all of them sport the turquoise hood emblazoned with the “T” that joins the “F.” As they accelerate faster and faster, the rail moves along like a runway about to be left behind by a cacophony of fighter jets. All the while, the pride appears driven along like they are chasing an invisible opponent.

Señor Buscador, owned by San Antonio’s own Joe Peacock Jr., looked fresh and full of stamina, as he moved effortlessly over the ½ mile with jockey Ty Kennedy as pilot. The best news from the work tab is that he galloped out nicely. A fine morning stroll for a racehorse who looks as though he is ready to light a powder keg of TNT underfoot. When and where he will race next is the question...

Flashback, just before Christmas, and there is a reason Thoroughbred-watchers, waiting in their blinds, have wanted to know his future plans.

Then, Señor Buscador cantered out onto the track at Remington Park, and proceeded to decimate a good field in the Springboard Mile 200k, after spotting it a number of lengths. Running with Lasix, which was needed according to Fincher since it was only his second-time out, negated the Kentucky Derby points available. No matter… With jockey Luis Quinonez aboard then, and possibly next time, the performance was stellar.

Since then, we’ve been waiting for Todd Fincher, Buscador’s able-bodied trainer and Peacock, to tell us where the talented colt is going next. The Kentucky Derby Trail beckons, and it is time for a decision. What is it going to be, Mr. Fincher?

“Since he worked out great this morning (Thursday 02/04), barring any issues, we are heading to New Orleans and entering in the Risen Star (Feb. 13),” the New Mexico-based trainer said. That is welcome news for Señor Buscador’s connections, and his growing number of fans.

This past year has indeed been difficult for Fincher and his operations, as it has for all of the industry in the Land of Enchantment. When COVID-19 rose on several different occasions, like a tidal wave of bad news, the Governor, Michelle Lujan Grisham, closed the casinos and racetracks. Zia Park, Albuquerque, and Sunland Park waited their turn patiently, but ebbs were more frequent than flows, and from her perch in the north, everything remained closed. A glimmer of hope sprung at Zia late in the year, but it did not last long.

For nearly 2 months now, since the Springboard Mile took place, Fincher shuttled major parts of his stable to SHRP, in preparation for their January-March Meet. As he related, “It was all I could do to keep from having to let most of the horses go.” An adaptable fellow and former jockey of Quarter Horses, he is used to challenging situations, but he had never been through something like a Pandemic. No one had.

Coming to SHRP, has given him the chance to recalibrate and assess what to do with his talented colt. Now the path is officially clear. It is likely the Risen Star (G2) with points applied towards the Derby as 50-20-10-5, will draw a strong field of competitors, including Brad Cox’s Mandaloun and Steve Asmussen’s Midnight Bourbon. The distance of 1 1/8 should suit, considering that big late kick. “I think he will do well moving forward, and I really like his mentality, the way he just enjoys running,” said Fincher, “and after that maiden at Remington, you could tell he was just beginning to figure out what was going on.” That bodes well for what is to come for this home-bred, who is out of the accomplished Peacock-owned mare, Rose’s Desert.

With so much ahead of him, now we know… Señor Buscador is headed to New Orleans and the Risen Star (G2). It's official.