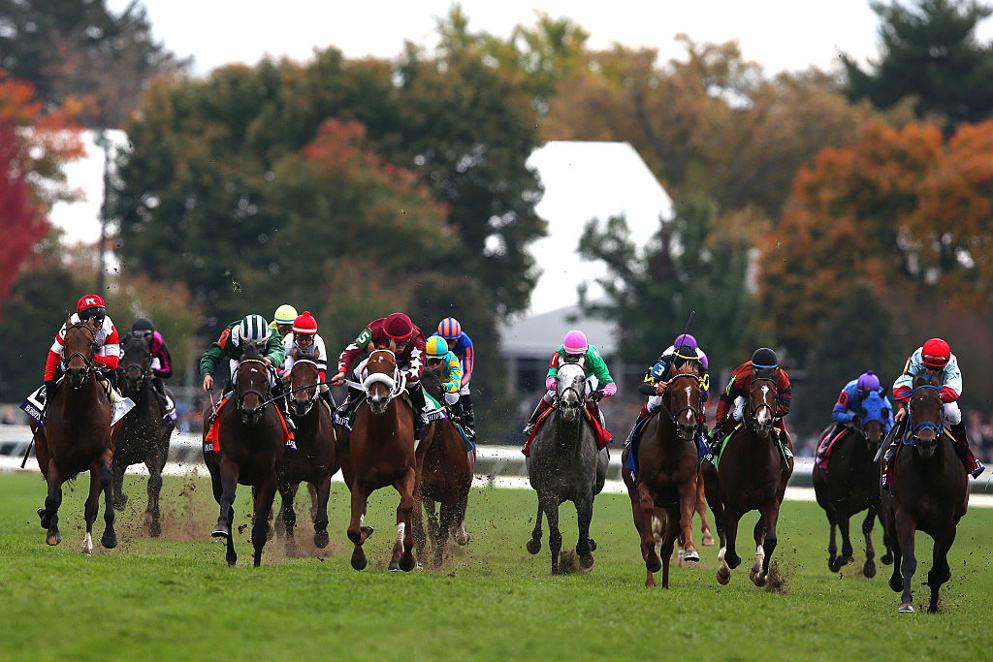 If you like grass sprinting, then the Grade II Shakertown is the race for you! See who turf-man, J.N. Campbell likes in the annual renewal of this contest...

One of my all-time “win” tickets that I cashed at Keeneland was backing a runner named Marchman in the 2014 Edition of the Shakertown S. Sprinting on the grass is never easy for connections, nor is wagering on a highly competitive contest like this one. But what it translates to at the old Keene Farm are some major prices that can be attained. If you can get a winner, like I did with Bret Calhoun’s Marchman at 24/1, the payouts are handsome. That win wager brought $49.60 for a $2 investment. Long shots do not always score, but do not be shy about looking for a price. There are all sorts of angles to play, like post positions, late-runners vs. those that like to go early, and jockey-trainer combos that work together often. Whatever the case, this year’s Shakertown, named for the historic site which is nearby, will be something to behold.

There is some fairly compelling evidence that the #1 post position is not the place to be. The angle simply does not assist, as mount and rider get pinned up against the rail. Architecture and physics merge… The homebred of Mr. G.W. Humphrey has a long record. Only 2 wins in 27 tries… not a positive percentage. Looking elsewhere would be sensible.

This gelding, now a 7-yr-old, had a nice run in the turf ranks a couple of years back, winning this race in 2019. He is still has talent for Joe Orseno, but that is not necessarily meant as a glowing comment. His fitness right now is perhaps better than most, and his chances are there with Paco Lopez aboard. Still, I think even more talented runners exist, and with some digging, they are embedded in this contest.

I have never wagered on a Kerri Raven horse, but here is one that she also owns. Taking a page out of Wesley Ward’s book, she sends this newly acquired grass sprinter from Tampa into Keeneland. While the Tampa turf excites, I normally like routers there and not the short goers. It is hard to believe that this gelding out of Overdriven is going to be able to match wits with this crowd in a Grade II.

Running 2-back at Sam Houston in the Stonerside Sprint 75k on the dirt, this gelding out of Street Sense was flashy on the frontend. Then, John Ortiz tried her up at Oaklawn in a high-level OC100k, and though she “Placed,” he was no match for Strike Power. My issue is the lack of turf form, and I question the grass jockey abilities of Gabriel Saez. There is no doubt this one is fast, but he has never been on the Haggin.

Here is an interesting turf sprinter that has many of the tools that I like to see in a runner going into a Grade II. Back in summer-fall, Linda Rice had this colt running in some quality NYRA sprints across all 3 tracks. She even fit a Kentucky Downs Grade II (Franklin-Simpson), which though it resulted in a 5th, was against a full field. Now, Mark Casse took over the playbook, and he sent him to the Tampa Turf Dash 100k. That particular race had competitors like Imprimis #2 and The Critical Way #12, which draw in here. I like his chances with Chris Landeros aboard. Casse knows more everyday about this horse’s methods.

Speaking of getting to know members of your barn… this 5-yr-old is brand new to the Heitzmann outfit, and that might be a concern. I am not sure entering a race of this magnitude is the right move straight from the word “go.” Yes, Mitch Murrill is aboard to serve as pilot, but this seems like a shot in the dark. Previously trained by Brad Cox, and before that, Linda Rice, this son of More Than Ready is going to have to majorly raise his game. He does have turf recency, so that is a plus.

Graham Motion does not possess a bevy of grass sprinters that are attached to Herringswell, but he received this one from the stable of Jerry Hollendorfer a couple of years ago. Motion made the switch and sent him to the turf, seeing something in his Jimmy Creed bloodline that was a tip. In 2020, he was no longer running in SoCal, but competed in some nice races at Belmont, Kentucky Downs, and Woodbine. Clearly, he is a pro at grass sprinting… the only issue is the layoff. However, it looks like his conditioner has had him flexing those muscles at his Fair Hill base. Watch out for this one!

DW Lukas knows a thing about training horses, but his stable is not what it once was… He survived a serious bout with COVID-19, and the man in the hat was not going to pass up another chance to enter a horse at Keeneland. This colt out of American Pharoah appears to have a nice bloodline, but I am unsure if this is really the correct spot for him. His choice of Drayden Van Dyke will be interesting, since as a jockey he really needs a new start. SoCal was done with him, and vice versa. I am against both horse and rider… looking elsewhere.

Trainer Michelle Lovell had Dynamite Babe in her care back in ’08-’10. She was a solid ALLW Co. runner, and as this one’s dam, she provides some stable turf bloodlines. You add in Justin Phillip as the sire, and you have a potent combination. I like this gelding’s ability, and his work down at Lovell’s Fair Grounds base appears choice. She entered him in the Colonial Power 75k last time, and he did not disappoint with a 5-length engine score. Regular jockey Colby Hernandez is back aboard again, which provides parity. Big chance after a poor performance in this race last year.

The Foster Barn is not a regular competitor at this level, so that should be an interesting experience for all involved. I am not sure if this 4-yr-old gelding is up to the challenge in this particular race, after running against lesser, for the most part. The Foster Family is hoping for something better, after trying to get home at Ellis, Indiana Grand, Turfway, and Churchill. A couple positive points do exist… getting Gerardo Corrales to ride is a score, as is the fact that the last time this son of Colonel John was at Keeneland, he finished 2nd in an ALLW Co. race last summer at this very distance. 40/1 that day… will be that again, if not higher.

When I see an entrant in a turf sprint that is the offspring of Violence, it is time to sit up and take notice. Adding to that type of awareness is the fact that Julien Leparoux climbs aboard this burner for Darrin Miller. That is good news for this barn because last week the former Apprentice Jockey Award Winner from years ago was “on” while riding at Gulfstream. Last out, in the GP Turf Sprint (G3), he was caught at the wire—a near miss. Coming to Keeneland, a track that Leparoux has ridden well on over the years, presents an interesting opportunity. If he is over 8/1, then he could be a fabulous wager.

Not a terrible number of “PA” breds come to Keeneland, but here is one that arrives from a significant Tampa-based trainer called Jose Delgado. He owns the claiming ranks there, and normally has a large contingent that he brings down from Monmouth and Parx. This is one of his more “seasoned” veterans, and when it comes to his last 6 races, every other one was a score. Heading into this Grade II, he is going to have to kick it up a notch. Having Luis Saez, one of the most versatile riders in maybe all of the world, should be a benefit. I will say this… if he does not make the lead, and blows the gate exit, then it is going to be a very long 5½F. That is quite a chance to take on someone who likes to go early.

The Wesley Ward Show comes back to Keeneland, as usual… It is not often that we see an entry that has made the last 3 Editions of a race, but that is what this son of The Factor has done in the Shakertown (G3). Back in 2018, he won the contest at 9/1, and afterwards shipped to the first of 2 trips to Royal Ascot. There is no doubt this 7-yr-old still has ability for his conditioner who also happens to own this stalwart. With Joel Rosario signed on to ride, you know it is going to be fast and furious. If the elite jockey can keep him close, he has more than even chance of winning.

Join us Saturday for all of our Keeneland selections, as Handicapper Sean and Turfwriter J.N., go head-to-head in what promises to be a fabulous Horseracing.net Handicapping Challenge! Should be a great set of races as the April Meet gets underway!