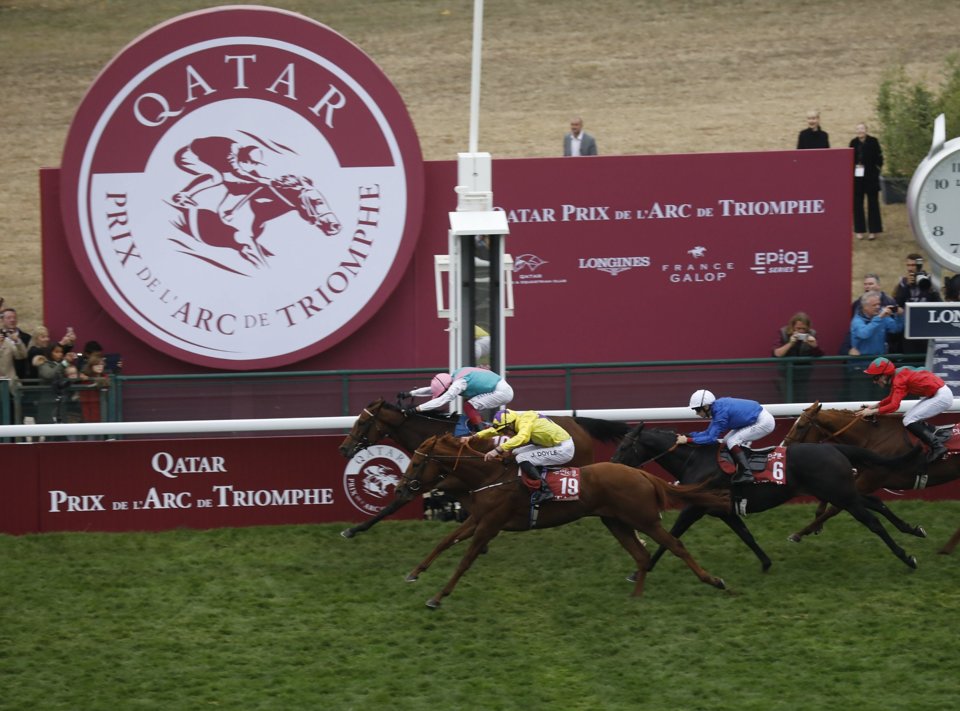 If it is Sunday in early October ... what time is it? Prix de l'Arc de Triomphe from Longchamp is the answer! Check out this analysis below ...

If it is Sunday in early October, then you know that one of the greatest turf races in the world is set to go—The Arc. Known by its full name, Prix de l'Arc de Triomphe, this Group 1 distance test is a competition of stamina and power … aggressiveness and settling … and it dates back to the 1920s. Yes, it is time for the 100th edition of this storied race! From the North American perspective, even though it does not include any runners from this side of the “pond” nor any bred in France, what is on the line that is significant is an all-expense paid trip to the Breeders’ Cup Turf (G1) at Del Mar in November. Who could forget in 2018 when the wonderful Enable, a filly, won her 2nd Arc in-a-row? John Gosden’s Juddmonte homebred then came to Churchill Downs with much fanfare, and she did not disappoint—winning the BC Turf with Frankie Dettori aboard. It was the capstone to a magnificent year, as she became the only horse to win both prestigious races in the same year.

Following in those footsteps is not easy, but this time around the favorite on Sunday will try their best. That horse is likely to be Dermot Weld’s excellent router, Tarnawa (IRE) #4. A 5-yr-old by Shamardal, she wowed the few that were on-hand last November for the BC Turf (G1) at Keeneland. With Colin Keane subbing for Christophe Soumillon (who tested positive for COVID-19), he came home nicely in the end to notch the prestigious victory. Weld is a superb conditioner, and once again his entry will take on the very best in a tough contest. Coming back from what amounted to an undefeated season in 2020 is never easy, and she just missed 11 Sept. at Leopardstown against St Mark’s Basilica (FR). That rival was summarily retired just last week, and will not be at Longchamp. If he was, Weld’s turfer would probably be the 2md choice. Not to put too fine a point on it, but if she is sharp on Sunday, then she will be very challenging to beat, as Soumillon returns to ride … a job he has not done since winning the Prix de l’Opera (G1) on last year’s Arc undercard.

When it comes to alternatives to this deep routing specialist, you could go in several directions. Leaving out Charlie Appleby’s Adayar (IRE) #10 is probably a mistake, especially considering the talented 3-yr-old is one of the only horses to beat Misriff, a top-class international dual-threat router. He did just that at Ascot back in June in the King George VI and Queen Elizabeth Qipco S. (G1) … adding to an impressive year that included the Cazoo Derby (G1) at Epsom. Now Appleby, Godolphin’s chief racing architect, has William Buick aboard this son of Frankel (GB), and I am sure he will be ready to come off the bench at Longchamp against those that are older. That is not an easy spot to run into, but never doubt this international uber-barn … they win. While I also like the look of the other “Blue” uncoupled entry in Hurricane Lane (IRE) #11, I would give the nod to Buick’s mount.

Another runner that warrants serious consideration will be ridden by international superstar jockey Ryan Moore. It would not be the Arc without an Aidan O’Brien charge. Snowfall (JPN) #15, by Deep Impact (JPN) and who is owned by the well-known connections of Smith & Magnier & Tabor, came to Longchamp last month with 4 wins in-a-row. Those races at York 2x, Epsom, and The Curragh were not terribly difficult, and it makes you wonder if the miss (by 1½ lengths) by the filly in the Qatar Prix Vermeille (G1) prep on the track in France was telling or just a blip? Will Moore ride this one differently than Dettori? We shall see …

One to include, for sure … Speaking of Japanese breds, you might also take a look at Chrono Genesis (JPN) #7 from trainer Takashi Saito's midst. The 5-yr-old mare has quite a pedigree and a class record from running almost her whole career in Japan, albeit against some very tough competition. Her win last out in the Takarazuka Kinen (G1) at Hanshin was a masterpiece. Shipping to France is not unknown to her after she was 2nd in the Sheema Classic (G1) on Dubai WC Night. Of course, no Japanese horse has ever won the Arc, but maybe with Oisin Murphy, who has had his share of ups and downs, can pull off an upset. I like her chances to be sure, as she will be my top selection.

This should be another magnificent wagering opportunity, and you will not want to miss putting one down this year! Have a look at this bet …

A ticket to Del Mar is on the line … It is time for the Group 1 Prix de l'Arc de Triomphe from celebrated Longchamp!