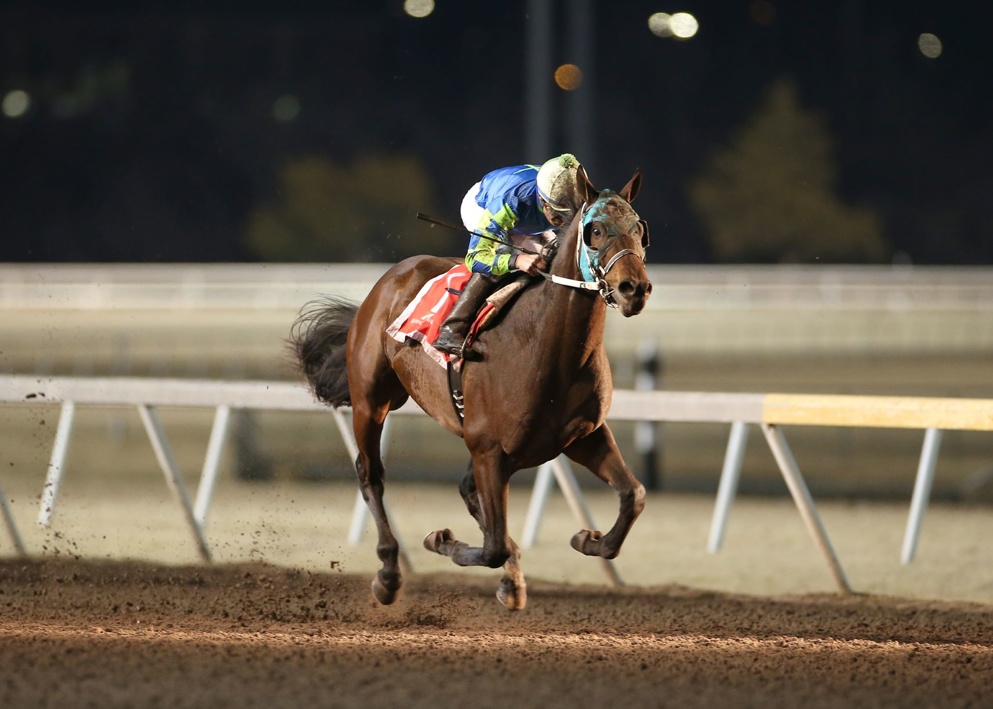 Todd Fincher's Senor Buscador won handily at Remington Park last December. The $400k Springboard Mile is coming this Friday! J.N. Campbell has a rundown of the entire field in this preview ... check it out! (Photo: courtesy of Coady/Remington Park)

Disclosure … 10-4-2-1 is not the order of finish for this year’s Springboard Mile (it can’t be, only 9 runners are entered). Rather, it is the Kentucky Derby Points that are up for grabs for the 1st through 4th finishers. If conditioners chose to run their colts with Lasix (5 will), then KYD148 Points are not attainable. With this year’s field, it looks to be a highly competitive affair. For over 4 years now, Churchill Downs has acknowledged that this now $400k contest (up from $200k since 2020) is an early opportunity for 2-yr-olds to score and toss their names into the Triple Crown Trail hat. After the Springboard is complete, debate and discussion will once again ensue over how its winner fits into the other prospective Derby favorites.

One half of Asmussen’s uncoupled entry is this talented colt by a sire that needs no introduction—Gun Runner. Part-owned by Winchell, this colt already has a number of “Non-G” efforts under his saddle; though his last was a lackluster try going 7F. Concerning … Back on 26 Sept. the 2-yr-old acquitted himself well, by going wire-to-wire in the Kip Deville75k. He posted quite a speed figure at Remington that night, and is looking to do so again with Carlos Montalvo who will be up for the 1st time. Easily the weaker of the 2 Asmussen entries … will forgo Derby Points and run with Lasix.

Here is an undefeated colt by Neolithic that rolls into OKC with a pair of impressive victories to his name. Trainer Saffie Joseph is awfully good down at his base at Gulfstream Park, which is where this Red Oak Stable hand broke his maiden. Shipping to RP will be a tough one, but Joseph is calling on expert NYRA-based rider Jose Ortiz to keep the streak alive. This race will be a tougher test than the “Non-G” contest he cruised to victory in last out in late October. It has been a promising start for the young colt … stay tuned because this one will be well-bet.

Trainer Todd Fincher is an accomplished New Mexico-based conditioner with a strong philosophy when it comes to breaking in young runners. In other words, he does it right … Last year, with Sunland Park closed due to COVID, he packed up a string and came to Oklahoma City. One of those runners was Senor Buscador, who won the 2020 Springboard in amazing off-the-pace style. Fincher returns with this well-bred son of Quality Road (he was purchased for $850k @KEE 2020 Sept. Sale!). Local Zia Park rider Roimes Chirinos makes the trip from Hobbs, and his mount has some closing ability. As he did with Buscador, the colt will run with Lasix. All in all, what we know is this entry will be well-prepared … that’s Fincher’s way. Back-to-back?

Trainer Rosa Ramirez is not a household name, but she has some runners in her stable with some local work at Remington. The colt that she sends to the Springboard Mile already has 4 lifetime starts, but her son of Lea was on the outside looking in, finishing 3rd in an OC75k race last time. The 2-yr-old was trying to make the move up from the MSW33k level, and it just did not happen. New pilot Eduardo Perez is going to have to get the best out of Ramirez’s runner (running with Lasix), and even with it, this just might be too big an ask.

The other Asmussen trainee who is coming to RP is this son of Classic Empire. Bred by the folks at Team Valor, and purchased for a whopping $350k back at the Keeneland September Sale in 2020, expectations are high. In a pair of races, the colt broke his maiden in his 2nd start at Churchill in a MSW120k. Going 6½F; it was an impressive result considering the size of the field. His odds were 6/1 that Friday, and I doubt they will be that again. With 1st time Lasix (that means no Derby Points based on the rules), and leading rider Stewart Elliott at the controls, this one could easily be the race time favorite. If he can extend out to this distance, he will be tough to best.

Another local runner that will be taking on some much bigger barns, is this one from Boyd Caster’s midst. By Den’s Legacy, the gelding is looking forward to his 7th career race. Talk about form … The Boyd Barn has watched their runner progress nicely in Oklahoma City, and with 3 wins in-a-row, he is ready for more. Those past 2 “Non-G” events speak to the fact that he is ready, but he has not faced this kind of competition. RP man Freddy Manrrique gets the call for the 5th time. Can he see this one home from off-the-pace, running with Lasix? Hmm …

A former member of Joe Sharp’s outfit, trainer Eric Reed picked this one up before the Keeneland October Meet, and after a poor start in an OC80k event, he ended up finishing 3rd. The son of Keen Ice (the only one to beat American Pharoah in stakes competition) was bred by Calumet Farm for a stud fee of $12,500. Looking over his form, he turned in an amazing 17-length romp at Churchill in an MC30k back in September. It is hard to gauge how he will do shipping in from Kentucky, but maybe the addition of Sonny Leon will assist. He is a rider with some solid numbers … Turfway, Mountaineer, and Mahoning Valley. Still, hard to gauge this one’s level of fitness.

If you are not familiar with Danny Pish, then you do not follow OK-TX racing all that much. He is an accomplished conditioner along the Red River, and regularly competes in stakes action at Remington, Lone Star, and Sam Houston. The gelding that he trots out for the Springboard is well-versed when it comes to the conditions in OKC. After 4 career races (3-dirt, 1-turf), his jockey Danny Sorenson has guided him to some mixed results. Back in late October, Pish put the colt into his first BT race, and he responded well at odds of 34/1—placed. That was a pretty impressive step-up in class, and he is going to make an even bigger one this time around. Sorenson is quite a veteran, and he can work wonders in difficult situations. The offspring of Hard Spun have proven they can be versatile, and win under the toughest of conditions. This could be a possible sleeper pick against the more popular selections.

Trainer Ron Moquett is an Arkansas conditioner who does it right. He combines old school methods with the latest innovations in training. You know when you back a Moquett runner, that it can win. His gelding by Tapiture won in fine fashion back at Churchill in his 2nd career race going 7F on the MT. As the favorite, he was doing what everyone thought he would … beating opponent Hitting Bombs. Moquett thinks highly enough of this 2-yr-old gelding to send him to Remington after some workouts at his Oaklawn base. The runner’s only jockey has been seasoned rider Julien Leparoux, and he makes the trip to OKC. If he can break well, and press the pace, then he might have a good shot to be there at the end. Don’t sleep on these connections … they could surprise, even with the class hike.

Join us Saturday for all of J.N. Campbell’s Remington Park selections! Should be a great set of races from OKC!