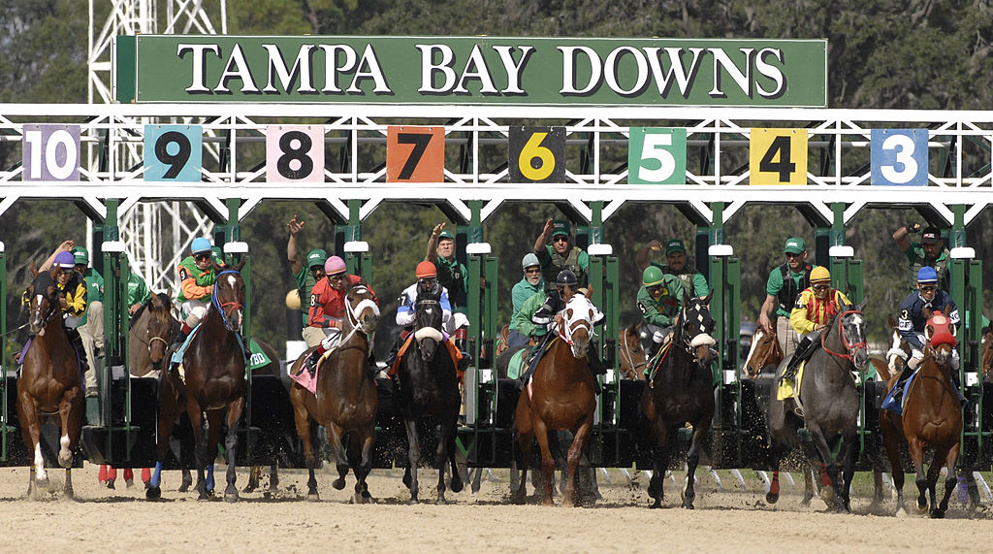 The G2 Tampa Bay Derby takes top billing on an exciting day of racing at Tampa Bay Downs that includes four graded stakes races. For the occasion, our in-house handicapper has made picks for the entire card and provided in-depth analysis of the Late Pick 5 sequence that culminates with the Tampa Bay Derby.

If you're looking for picks elsewhere on Saturday, be sure to check out our Free Horse Racing Picks via the gold button below.

Winfromwithin (#1) is the first of two very similar looking Todd Pletcher-trained horses in this Pick 5 sequence (the other being Jouster in Race 10) that I’m not entirely sold on. After some uninspiring dirt races on the NYRA circuit last year, this horse was a revelation last out on turf at Gulfstream, where he broke his maiden with an 84 Beyer Speed Figure. He’s going to be a decisive favorite based on that number, which does hold up to scrutiny as a number of horses have run back to confirm it, however he got to set an easy pace in that spot and there’s a ton of speed to go with him in this race. Despite the strength of the maiden field he beat being corroborated, something about him just strikes me as phony, so I went in a different direction with my top pick.

I’m not sure if he’s actually running in this race or not since a rider has not been named, but Mira Mission (#9) is a super logical contender given his off-the-pace running style. This horse has made a rather sudden rise to the stakes ranks after breaking his maiden for 50k two starts ago, but his last start, which he won by 1 ¾ lengths with an 80 Beyer, came against a strong group of starter allowance foes at Gulfstream. His trainer Tom Bush has already sent out a stakes winner at the meet, and I suspect he’ll have another live one with Mira Mission if he decides to run.

This is a pretty wide-open optional claimer, but I see two horses that appear to be a cut above your usual fare. Uncork the Bottle (#8) is the obvious one. He’s coming out of a considerably tougher race at this level for Saffie Joseph, Jr. and could take a step forward with blinkers removed for this start, which would make him tough to beat.

Uncork the Bottle will feature prominently in my wagers, however I can’t help but pick Last Promise (#4), even in light of the long layoff he must deal with. Many are going to be turned off by that extended break and the fact he returns for trainer Chandradat Goberdhan, who was winless in 2020, but Goberdhan has actually been having a good meet and this horse was running very well last year for trainers of a similar profile. If he comes back in the same kind of form, which his worktab seems to indicate is a distinct possibility, Last Promise can absolutely upset this lackluster field.

Let me start by saying I want no part of the fillies coming out of the G3 Endeavour, which was a graded stakes race in name only and run in very slow time. Instead, I think the two you most want in this spot are Magic Attitude (#1) and Micheline (#11), who make their 4-year-old debuts after last contesting the G1 QEII Cup at Keeneland, where they finished third and second, respectively. My preference of these two is Micheline, who, despite running well ahead of Magic Attitude in the early stages of the QEII Cup found herself having to make up ground in the stretch, which she did well with a strong, steady run. That race was subsequently flattered when winner Harvey’s Lil Goil came back to finish third in the G1 Breeders’ Cup Filly & Mare Turf, and Magic Attitude and Micheline also happen to go out for potent Tampa outfits. If either is primed to run off the layoff, they’d be tough to overcome.

I’m also going to take a shot with Myhartblongstodady (#3). I’ve never been much of a fan of this mare and she benefited from some fantastic trips in 2020, but she really showed me something last out in the Forever Together at Aqueduct when she was forced to rally from off a glacial pace. Myhartblongstodady has far more early speed than she was able to show last time, and I believe she’s a threat to wire this bunch if left to her own devices.

Jouster (#2) is the second of two aforementioned Todd Pletcher runners that look formidable on paper but could be a bit vulnerable. Unlike her stablemate Winfromwithin in the Columbia, this filly has actually followed up her dazzling maiden score with an encore win against optional claiming company, though her last race could’ve revealed a chink in her armor. While she had a right to tire in the stretch that day after setting a swift pace, it does feel as though 1 1/16 miles is pushing her limits. There’s not an overwhelming amount of early speed signed on for this race, but it’s doubtful she gets too comfortable on the front end, which is going to compromise her chances. As a heavy favorite, I don’t think she’s that convincing.

I prefer Be Sneaky (#6), who makes her turf debut in this spot for trainer Arnaud Delacour. This filly hasn’t shown too much on the main track, but she’s run fairly well on it despite being bred heavily for this surface. If Jouster does regress again, which I’m anticipating, I believe this race sets up well for Be Sneaky, who should move way forward on this surface for Delacour.

For our full preview of the race - check out our Tampa Bay Derby 2021 Picks...