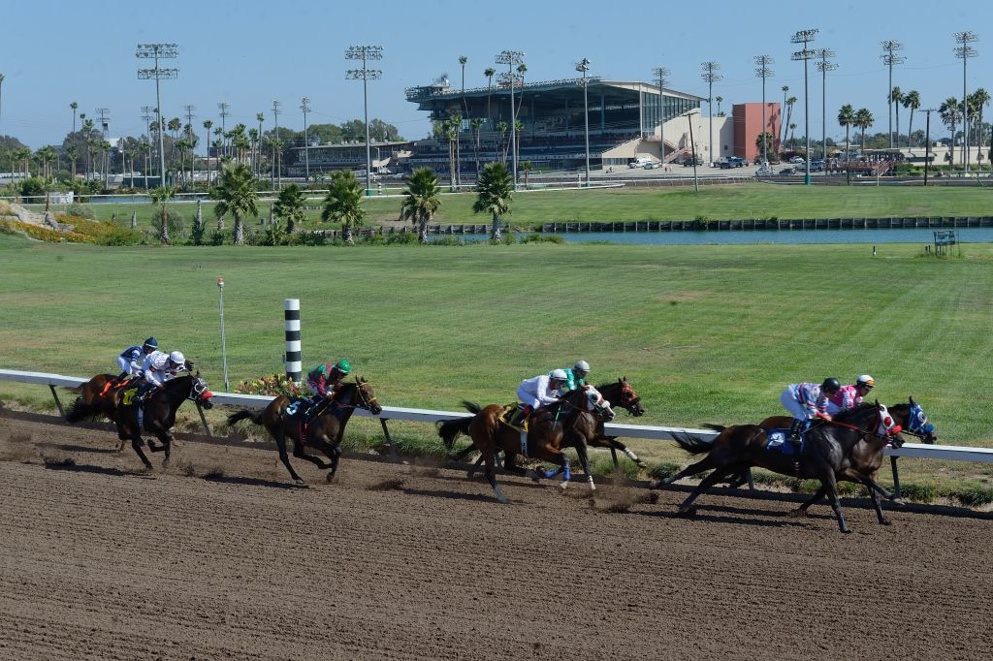 Los Alamitos is the site for Saturday's Starlet Stakes ... The Grade 1 race has been "owned" by a certain SoCal trainer ... is he back? Read on ...

Since 2013, trainer Bob Baffert has owned the Starlet Stakes at Los Alamitos. The Grade 1 race was his 5 times during that span. With a 4-peat looking to turn into 5, he has seen Dream Tree, Chasing Yesterday, Bast, and Varda all come home nicely. Those runners did not go on to stardom per se, but notching yet another G1 win was in the cards. Of course, the other piece of news coming out of this race is that Kentucky Oaks Points are up for grabs. That will not include Baffert this time around, since Churchill Downs, who hosts the race, has banned the trainer for 2 years. He cannot run in any races under the Twin Spires. How will that story play out this time around … it should be interesting to say the least.

One of 3 horses that is not trained by Bob Baffert, this filly by Blame was 2nd to Eda #6 last out in the Desi Arnaz 100k at Del Mar. Doug O’Neill has a talented runner here, but she is going to be up against a group of runners that are equally, if not more so. O’Neill’s regular rider, Mario Gutierrez gets the call, and he has handled these duties thus far over a pair of lifetime contests. More to do today …

Bob Baffert’s 1st entry is one that looks inviting. Even though last out in the Grade 2 Chandler at Santa Anita, she was too far back to make any headway. “No impact …” that is the phrase. Coming back to this spot, one has to think that this daughter of Curlin deserves a fair shake. Certainly, her work tab speaks to a certain level of fitness. With Flavien Prat, historically an aggressive rider in the saddle, this one is certainly capable coming back to the track for another try.

If you know Little Red Feather Racing, then you know they put together a quality team. Right now, they are remaining loyal to Bob Baffert, and that speaks to their commitment to the conditioner. This is probably the least talented of the trio, especially considering that she missed in the Anoakia 75k back at Santa Anita in early October. Edwin Maldonado is known for scooping up a major win when you least expect it. This might be too tough …

Trainer Bob Hess does not start many runners in “Graded Co.” He is trying this one though who was pretty sharp on the turf a couple races back at Del Mar and Santa Anita. The connections got ambitious and were hoping that the BC Juvenile Fillies Turf (G1) was a possible target, but their charge ended up 9th. Now, this filly by Cairo Prince is hoping to try the dirt for the 1st time. With the hot-handed Kent Desormeaux in the saddle, you never know. John Sadler made such a move last year (turf to dirt) with Rock Your World, maybe it is possible here … I am against.

Here is a filly by Cupid that came out of that race, the Chandler (G2), at Santa Anita. Phil D’Amato believed his runner was ready for the mainstage, but it was not to be in the BC Juvenile Fillies (G1). No one was going to beat Echo Zulu that day. He hands the pilot duties over to HOF Mike Smith, and he is going to try and make an impact. It is going to be a chore, what with this competition. Smith is riding less and less these days. Let’s see if he can get this one going …

The presumptive favorite coming into this race is Baffert’s ace … a daughter of Munnings who sold at the March OBS for a cool $550k. With 5 races under her saddle already, this filly is coming into Los Al with a 2-race win streak to her credit. She lived up to favorite status in the Desi Arnaz 100k, and should take this race, if she comes with her “A-Game.” JJ Hernandez continues to have a strong year, and even though he has not ridden this one for Baffert, he could win the day. Nothing like a frontrunning style to make the difference …

Join us Saturday for all of our Los Alamitos selections! Should be a great set of races from SoCal!