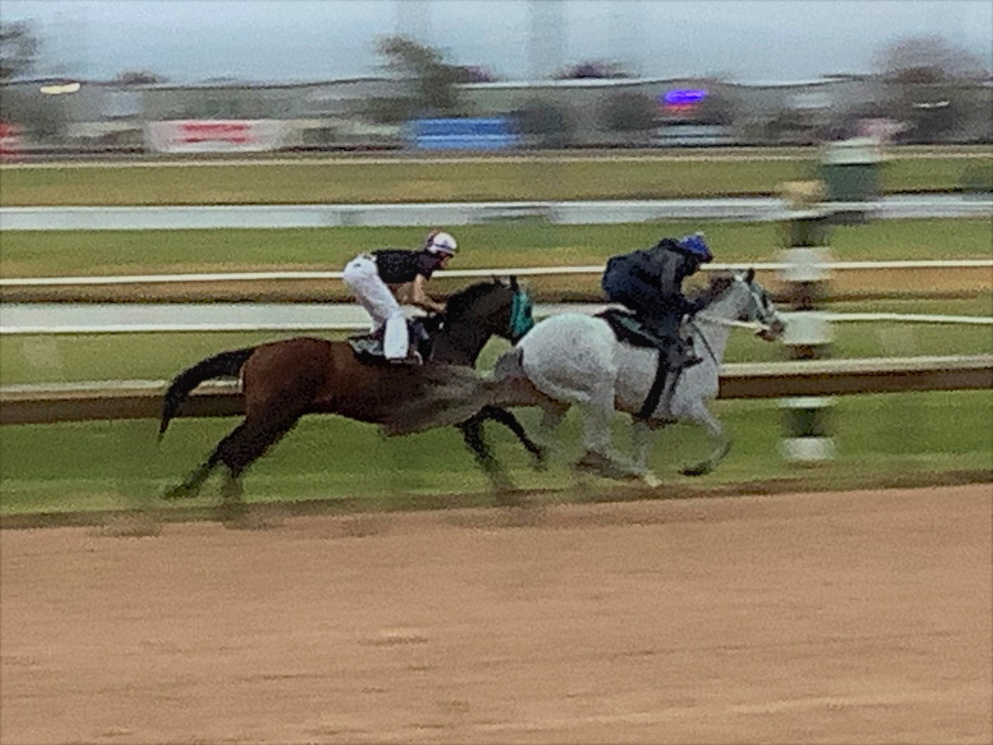 Senor Buscador (inside), trained by Todd Fincher and ridden here by jockey Ty Kennedy, works on Friday at Sam Houston Race Park. Fincher confirmed that a minor injury has sidelined the colt. He will be back at some point in the future.

Horseracing.net confirms that Todd Fincher’s Senor Buscador is now off the Kentucky Derby Trail. After a key workout on Friday, by the next morning a mild sprain was discovered. According to Fincher, his colt will be taking time off, with the goal to return to racing at some point in the future.

A couple days ago, as Ty Kennedy’s perspective went vertical, it then proceeded to accelerate along a horizontal trajectory. Such is the life of a jockey on-track. It is a series of beginnings and endings, but in between, there can be some unbelievable moments, as rider and Thoroughbred form a renewed alliance.

Friday morning under an ashen sky in Houston, Texas, Kennedy was aboard Fincher’s Senor Buscador for his latest work since he finished 5th in the Risen Star at the Fair Grounds. It was a system test, to see how the offspring of Mineshaft and homebred out of Rose’s Desert, was calibrated. This one was important, but then again… they all are. Working alongside Grey Storm, another of the conditioner’s prospects, Kennedy positioned the duo along the rail, and achieved a lovely cruising speed, just off his stablemate. The result of a half-mile produced a time of 48.40.

Speaking with both Fincher and Kennedy sans workout, they both offered solid reports. “I thought he looked really good, and he seemed like he was doing well throughout,” said the conditioner, in that succinct manner of his. Kennedy also added a verbal point of view when he said, “Great work back, I mean a lot of people believe that the first training try after a race can tell much about what direction the horse is going in. Off of that one, he seems to be headed in the right direction.”

That direction changed by the next morning, when Fincher informed me that Senor Buscador would undergo a "reevaluation" after a "minor issue." By Sunday, after talking options over with Joey Peacock, the colt's owner, they decided it would be best to take him out of competition since he sustained what was deemed, "a mild sprain suspensory." As Fincher sees it, "We are just doing what is best for the horse long term, because we could run him, but it would be risky."

That next "run" was going to be the Grade II Rebel Stakes at Oaklawn Park in Arkansas. Just 2 weeks away, headed into this weekend, the connections were confident that the race would set up well for his young charge. On the line were Kentucky Derby Points, 50-20-10-5, to be exact. After that major late run in the December Springboard Mile 100k at Remington Park, all eyes were fixed on Buscador's development. Buzz was aplenty...

The Oaklawn 1 1/16th distance, coupled more importantly with a different track, suited their needs. After the Risen Star effort at the Fair Grounds, Fincher's own take on the race began to evolve. “You know initially I was disappointed, but after looking at it, he ran well, it’s just that track is not conducive to his style.” Coming from behind on dirt, having to go 6 or 7-wide, and competing on a speed favoring surface, were all tough conditions to say the least.

The New Mexico-based trainer, who has relocated the majority of his operations to Sam Houston because of the COVID-19 shutdowns in his state, said as much, “Speaking with lots of folks in New Orleans, they said that the rail is really the place to be, and if you are not there, you can just get lost.”

Now, instead of preparing for the next step along the "Road to the Derby," Fincher and his team are thinking about what's to come. It is what responsible horsepeople do. He couched it even better when he said, "We need to stop him and give him time off because he such a good horse and has a bright future." That's Fincher's measured approach... taking each day in stride. Senor Buscador will return. Like all things, it will happen when the time is right. For now, it's best that he is off the Trail.