The Grand National is the one race of the year where the whole country stops and gets involved, so the idea of a sweepstake is a brilliant one.

Grand National Sweepstakes have been going on in office blocks and football teams for a number of years now, and it is a great way for everyone to be involved - no matter how much knowledge they have of the race.

The idea of a sweepstake is for a group of people, usually in a work place, to each pay in an amount of money (usually £1 or £2) and then pick one of the 40 runners for the Grand National out of a hat.

This ensures that everyone gets a fair chance of picking out the winner, and the people that pick out the first three or four finishers will share the prize pot between them.

This year's Grand National takes place on Saturday 15th April at 5.15pm. Just print out the runners from the bottom of this page and play along!

Note that 3 reserves will now run in the race so please take note of these changes:

33. Phoenix Way is replaced by Commodore 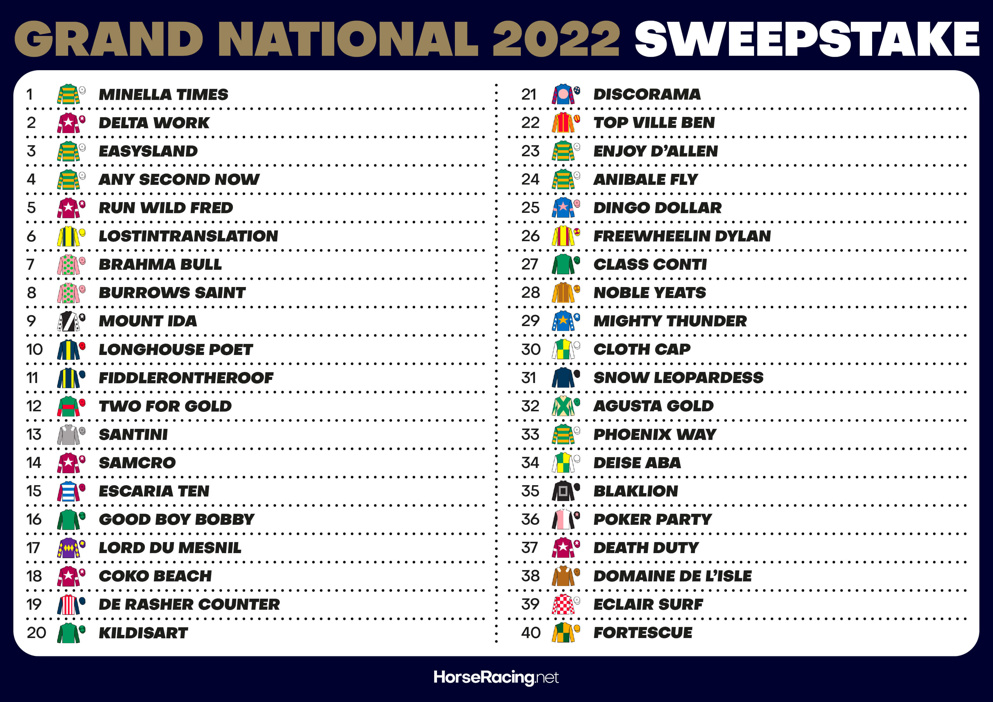 We take a look at the odds for the 2023 Grand National, which takes place at Aintree racecourse on April 15, and it's set to be another scorching contest next spring... Noble Yeats and Any Second Now fought out a thrilling finish to the…

It's the biggest race in the world, the Grand National at Aintree Racecourse is a race like no other and is synonymous with once a year punters hoping to strike lucky. 40 runners will go to post at 5.15pm and we've highlighted what…

Grand National Best Tips: Find out who the racing experts are tipping for the Grand National
By Steve Chambers

We are all set for a mouth-watering renewal of the 2022 Randox Grand National at Aintree this afternoon, and helping punters with their selections for the big race we have picked out some of the most popular horses selected by a host of racing…

Our resident tipster Raceolly is back for his best bets on Grand National day, and you can check out all his selections for Saturday's racing here... 13:45 Aintree - EFT Construction Handicap Hurdle BEAUPORT might have a fair bit of…

The biggest single day for casual Horse Racing fans is this Saturday as 40 horses are set to take to the Aintree track and take on the famous fences. On that note, Paddy Power are looking to get your custom so they have put together a special…

It is Grand National week and Betfair are giving you a welcome offer for all new customers looking to sign-up and place a bet on the big race. The company are giving all qualifying customers a Free £10 Bet to use on any sport following…

William Hill Grand National Betting Offer 2022: Bet £10 and get a Free Bet worth £10
By Neil Monnery

The Grand National is looming large on the horizon and William Hill have put together a simple sign-up offer for New Customers looking to place a minimum £10 bet on the big race this weekend. Full details of this offer - which is valid…

It is one of the greatest spectacles on the sporting calendar, as the Grand National attracts worldwide attention as 40 horses do battle over four-and-a-quarter miles, with only the classiest and toughest horse prevailing in the Aintree marathon,…

Our top columnist Ed Quigley picks out his 1-2-3-4 for the 2022 Randox Grand National, which takes place at Aintree on April 9... Well, The Grand National is here again, and the anticipation is building beautifully. For a while now, my…

Fresh from tipping up 16/1 and 13/2 winners on Thursday and bagging a couple of profitable placed selections as well, Raceolly is back with his tips for Friday's action at Aintree on day two of the Grand National meeting... 13:45 Aintree…

Grand National Betting Offers 2022: BoyleSports to pay out on 7 places
By Neil Monnery

The Grand National is this Saturday and we know for many people that means that they are looking to sign-up to an online betting account. Going through all the various options can be a bit overwhelming but our partners in BoyleSports have put…

grand-national
uk
Today's most tipped horses, biggest priced tips & more
Big race previews from our expert team
Today's Naps Table selections and latest standings
Results for every race at the Cheltenham Festival
The latest free bets and betting offers in one place
Check out our Royal Ascot hub
Grand National runners
Advert Disclaimer
Horseracing.net is a free online resource which endeavour to provide helpful and useful content and odds comparison to its visitors. Please be advised that Horseracing.net accepts affiliate commission from the companies appearing on the site, and agreed commission levels impact the location and order in which the companies (and/or their products) are presented on the website. Any ratings that appear on this site is determined by our subjective opinion of the brand but also based on market share and reputation, each brand's conversion rates, commission paid to us and general consumer interest. Company listings on this page don't imply our endorsement. We do not feature all providers on the market. Except as expressly set forth in our terms and conditions, all statements and warranties regarding the information presented on this page are disclaimed. The information, including odds, which appear on this site is subject to change at any time.