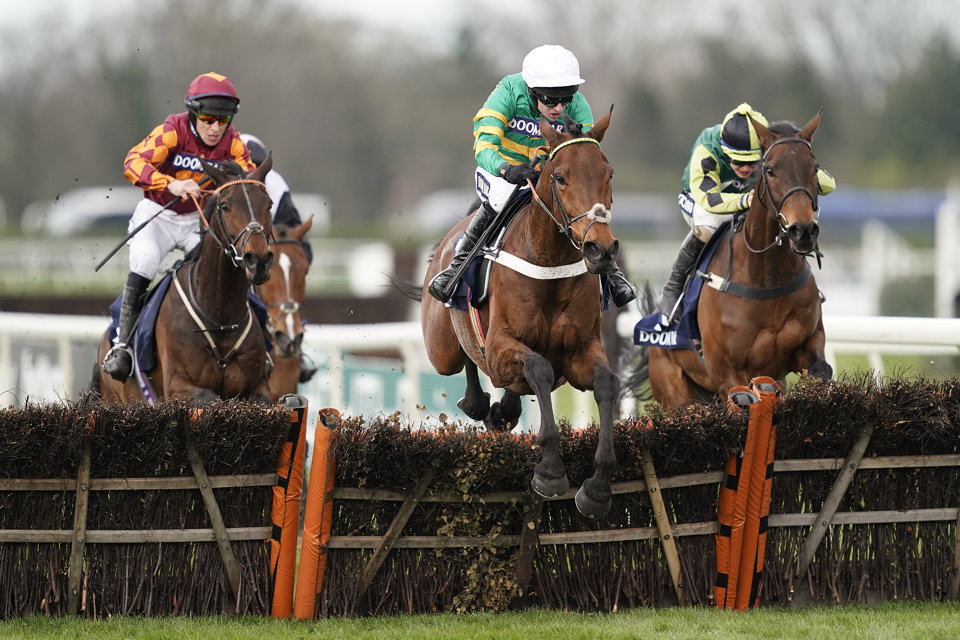 Champ lived up to his name when winning the 2019 Sefton Novices' Hurdle for the Nicky Henderson team.

A Grade 1 contest over three miles and half a furlong, the Sefton Novices’ Hurdle is one of the feature races on day two of the Grand National Festival, Ladies Day.

The latest odds for the Sefton Novices’ Hurdle will be listed below just as soon as they become available.

You can find our tip for the Sefton Novices’ Hurdle a little closer to the time.

What is the Sefton Novices’ Hurdle?

The Sefton Novices’ Hurdle is a Grade 1 contest on day two of the Grand National Festival, Ladies Day, held over a distance of three miles and half a furlong.

The race regularly features key players from both the Spa Novices’ Hurdle and the Baring Bingham Novices’ Hurdle at the previous month’s Cheltenham Festival. Winners of the Sefton have gone on to become future Stayers’ Hurdle winners, with the most recent to do so being the 2015 winner Thistlecrack, who won the 2016 Stayers’ Hurdle, before doubling up in the 2016 Liverpool Hurdle at this meeting.

What happened in the 2021 Sefton Novices’ Hurdle?

Lucinda Russell's Ahoy Senor was a shock 66/1 winner of the Sefton Novices' Hurdle, as he pulled well clear of the well-fancied favourite, Bravemansgame, who failed to land a blow, with Oscar Elite finishing third.

The history of the Sefton Novices’ Hurdle

Established in 1988, the race was originally known as the White Satin Novices’ Hurdle, before being given its current title in 1993. Initially a Grade 2 contest, the race was upgraded to Grade 1 status in 1995.

Horses regularly go on to bigger and better things after winning the Sefton, with the most illustrious name on the roll of honour perhaps being the 2015 winner Thistlecrack, who went on to win the 2016 Stayers’ Hurdle at Cheltenham and the 2016 Liverpool Hurdle to boot.

The last horse to win both the Spa Novices’ Hurdle (Albert Bartlett) and the Sefton Novices’ Hurdle in the same season is the Rebecca Curtis-trained At Fishers Cross, who did so in 2013.

Who is the most iconic winner of the Sefton Novices’ Hurdle?

There have been some legendary winners of the Sefton down the years with the brilliant Barton Bank perhaps the best of them in the early years with the David Nicholson trained horse claiming the win in good style in 1992.

More recently it is Thistlecrack who is the stand out name on the honours list with the future Stayers Hurdle and King George winner first coming to the attention of the sport with his emphatic Sefton win back in 2015. It was an amazing performance from an un-fancied horse at the time and marked Thistlecrack as a horse with immense potential for Colin Tizzard.

Are there any trials races for the Sefton Novices’ Hurdle?

It is important to take a closer look at the form before having a bet and that certainly applies to the Sefton Novices Hurdle which does come at the end of a long season full of ups and downs.

The obvious form race to look at before this one is the Albert Bartlett Novices Hurdle at the Cheltenham Festival with a number of those runners likely to take their chance in the Sefton as well each season.

Who is the most successful jockey in the Sefton Novices’ Hurdle?

AP McCoy and Barry Geraghty were long time rivals and it is those two at the top of the Sefton record books with three wins each in the race. McCoy tasted Sefton victories on Unsinkable Boxer (1998), Black Jack Ketchum (2006) and At Fishers Cross (2013), while Geraghty won on Sackville (2000), Iris's Gift (2003) and Beat That (2014).

Who is the most successful trainer in the Sefton Novices’ Hurdle?

There is no surprise to see Nicky Henderson as the record holder for the most wins in the Sefton with an excellent four wins to his name in the race at the time of writing. The seven Barrows handler has won the race with Rustle (1988), Beat That (2014), Santini (2018) and Champ (2019).