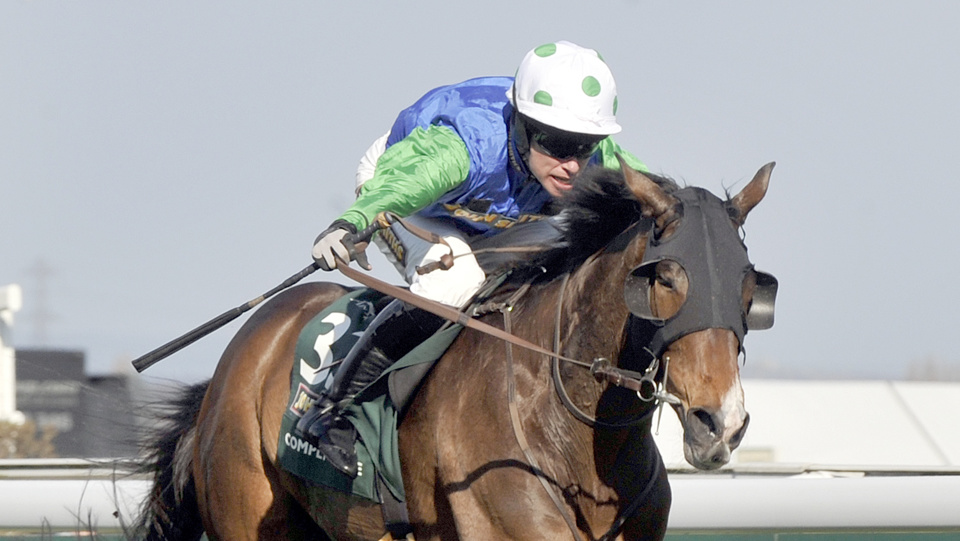 Comply Or Die won the 2008 Eider Chase before going on to win the Grand National the same year.

The Eider Chase is one of the premier staying handicap chases run in February at Newcastle racecourse. The marathon test at the north east venue is run over a shade over four miles, and it's race that can often be used as a springboard to the Grand National at Aintree in April.. You can find the latest odds for the 2021 Eider Chase here a little closer to the time.

You can check out our Eider Chase tips here nearer the off...

What is the Eider Chase?

The Eider Chase is a staying handicap chase run over four miles and 122 yards and takes place at Newcastle racecourse. With 25 fences to jump during the marathon test, the Eider Chase is one of the most gruelling races on the National Hunt calendar, and only the strongest stayers will complete the testing course. It's regarded as one of the most notable trials for the Grand National at Aintree and is one of the star contests at the north east venue.

First run in 1952, the Eider Chase has had to suffer with a plethora of abandoned renewals as because it's run in February there can often be a significant cold snap, which ultimately forces Newcastle to call the meeting off. However, it's still regarded as one of the most exciting races in the second half of the National Hunt calendar outside of the premier festivals, and it's a must-watch for those looking for Grand National clues.

With it being a handicap race then it can often see some proven stayers taking their chance, while some up-and-coming stars will step up in class to try and claim victory and look to enhance their Grand National chances at Aintree in April.

Brian Ellison's Sam's Adventure claimed a fine win in the Eider Chase at Newcastle, as the nine-year-old got the better of Crossley Tender in a vintage finish to the marathon contest. Pulling ten lengths clear of Salty Boy in third spot, Sam's Adventure was chased all the way by Crossley Tender, who travelled eye-catchingly well through the contest, but the latter was unable to get his head in front with 15/2 chance Sam's Adventure bagging victory.

Brave as a lion! Sam's Adventure sees off Crossley Tender in the @vertemam Eider Chase at @NewcastleRaces for Henry Brooke and @BERacingLtd! https://t.co/8PyFczikZH

The history of the Eider Chase

Ever since Witty won the inaugural running of the race in 1952, the Grand National Trial has historically been one of the most competitive staying handicap chases on the National Hunt calendar.

Highland Wedding was a three-time winner of the race winning in 1966, 1967 and 1969 (1968 race was abandoned), so the Toby Balding-trained stayer is the most prolific winner of the race, while it's now been a breeding ground for potential Grand National contenders.

While many competing in this race may head to the Aintree showpiece as an outsider, it can often be a race used as a test outing for those trainers looking to see if their horse will stay the marathon trip at Aintree a few months later in the season.

Who is the most iconic winner of the Eider Chase?

There's no doubt the most iconic winner of the Eider Chase is the David Pipe-trained Comply Or Die, who stormed to an eight-length victory in the 2008 renewal at Newcastle.

The Pond House inmate then went on to become a National Hunt great just two months later as he bounded to victory in the 2008 Grand National at Aintree. He very nearly followed up that Grand National win in 2009, but came second to Mon Mome, but the Pipe-trained raider is still the only horse to achieve the Eider/Grand National double the same season.

Are there any trials for the Eider Chase?

Horses competing in the Eider Chase can come from a whole host of races, but the likes of the Rowland Meyrick at Wetherby on Boxing Day and the Peter Marsh Chase at Haydock Park can often be used as a stepping stone to the Eider Chase.

Who is the most successful jockey in the Eider Chase?

A host of jockeys have won the Eider Chase twice in their careers with the more recent riders being the abovementioned Timmy Murphy, who is one of those star names. Peter Niven (1995 & 1997) and multiple Cheltenham Festival winner Tom Scudamore (2007 & 2014) are another brace of National Hunt riders that have claimed victory in the saddle on two occasions.

Who is the most successful trainer in the Eider Chase?

Toby Balding is undoubtedly the most successful trainer in the Eider Chase, as not only did he saddled Highland Wedding to a trio of wins in the sixties, he also trained Lucky Vane to victory in the 1984 Eider Chase to enhance his fine record in the race.

#AD New customers only. Place your FIRST bet on any sportsbook market and if it loses we will refund your stake in CASH. Max refund for this offer is €/£20. T&Cs apply. 18+ begambleaware.org
get offer
Bet £10 Get £40 in Free Bets
#AD 18+. Play Safe. New customers using promo code M40 only. 1x per customer. Min £/€10 bet. Min odds 1/2 (1.5). Free bets of 2 x £/€15 issued after first qualifying bet settles. Max £/€10 Bonus. 35x wagering requirement. Max redeemable bonus: £25. Casino bonus expires after 72 hours. UK & Eire only. Additional T&Cs, including free-bet, game, location, payment method and stake contributions apply. begambleaware.org.
Welcome Offer
#AD Open Account Offer. Up to £100 in Bet Credits for new customers at bet365. Min deposit £5. Bet Credits available for use upon settlement of bets to value of qualifying deposit. Min odds, bet and payment method exclusions apply. Returns exclude Bet Credits stake. Time limits and T&Cs apply. The bonus code ‘100BET365’ can be used during registration, but does not change the offer amount in any way. 18+ begambleaware.org.
Bet £10 Get £30 Free Bets + £10 Casino Bonus
#AD Minimum deposit of £10 using deposit code 30F - A qualifying bet is a ‘real money’ stake of at least £10 placed on any sports market - Minimum odds of 1/2 (1.5) - Free bets credited upon qualifying bet settlement and expire after 7 days - Free bet stakes not included in returns - Casino Bonus must be claimed within 7 days • To withdraw bonus/related wins, wager bonus amount x40 within 14 days • Wagering req. vary by game • Withdrawal restrictions and Full T&C’s apply. 18+ begambleaware.org
Bet £10 Get £30 + 60 Free Spins
#AD New UK & NI customers only. Promo code SPORTS60. Deposit and place first sports bet of £10+ in one transaction, at odds of Evens (2.0)+, settled within 60 days. First bet must be on Sports. £30 in Free Bets credited within 48 hours of bet settlement. 7-day expiry. Payment restrictions apply. SMS validation may be required. Max 60 Free Spins on Justice League Comics. 7-day expiry.  Full T&Cs apply. 18+ begambleaware.org
Up To £100 In Free Bets
New customer offer. Place 5 x €/£10 or more bets to receive €/£20 in free bets. Repeat up to 5 times to receive maximum €/£100 bonus. Min odds 1/2 (1.5). Exchange bets excluded. T&C's apply, 18+ begambleaware.org
Bet £10 Get £40 In Bonuses
#AD 18+ new customers only. Deposit, opt-in and place a £10 qualifying bet at odds of 2.00 or greater within 7 days of opening a new account; excludes cashed out bets. Receive 3x £10 Sports Free Bets, valid on set events only at odds 2.00 or greater. Plus, a £10 Game Show Bonus, selected games, wager 40x to withdraw a max of £250. Bonuses expire in 7 days. T&Cs Apply, see below. Please Gamble Responsibly. 18+ begambleaware.org
Bet £10 Get £20 In Free Bets
#AD Min stake £10. Min odds 1/2 (1.5). First bet only. Free bets expire in 7 days. Cashed out bets won’t apply. Payment method restrictions. Online UK customers only. 30 days to qualify for £20 in Free Bets. 18+. T&Cs apply
Money back As A Bonus Up To £40 If Your First Racing Bet Loses + £10 Casino
New customers only. 18+, BeGambleAware.org. Min deposit £10. Money back as bonus. Wagering requirements: Racing 3x at min. odds of 1.40 (2/5), Casino 35x. Only one bonus can be used at a time, Racing bonus must be wagered before using the Casino, unless the bonus has been forfeited. Bonus will expire after 7 days of opt-in. #ad
Bet £10 Get £5 Or 50% Losses Back Up To £25
To activate your Sportsbook 50% Back Welcome Offer, simply deposit and bet on any Sportsbook markets of your choice at odds of evens (2.00) or greater. If your account has Sportsbook losses at the end of your first day's betting (23:59), we'll refund 50% of your first day's losses as a Free Bet up to £25 (Minimum 3 bets required). If your account is up, you're guaranteed a £5 Free Bet provided you place at least 1 bet of £10 or greater at minimum odds evens or greater. T&Cs apply. 18+ begambleaware.org
Advert Disclaimer
Horseracing.net is a free online resource which endeavour to provide helpful and useful content and odds comparison to its visitors. Please be advised that Horseracing.net accepts affiliate commission from the companies appearing on the site, and agreed commission levels impact the location and order in which the companies (and/or their products) are presented on the website. Any ratings that appear on this site is determined by our subjective opinion of the brand but also based on market share and reputation, each brand's conversion rates, commission paid to us and general consumer interest. Company listings on this page don't imply our endorsement. We do not feature all providers on the market. Except as expressly set forth in our terms and conditions, all statements and warranties regarding the information presented on this page are disclaimed. The information, including odds, which appear on this site is subject to change at any time.
Today's Most tipped
Shantou Flyer
Wincanton 12:00
U
13 Tips Result
Le Chiffre D'Or
Wincanton 15:25
1st
12 Tips Result
Casa Loupi
Wincanton 14:50
1st
11 Tips Result
Wetlands
Ayr 16:10
7/4
9 Tips Bet Now
Latest racing results
Newbury
15:55
Full Result
1st Foxes Tales
2/1 JF
2nd Counsel
2/1 JF
3rd Alfaadhel
9/2
Tramore
15:48
Full Result
1st My Oakclahome
9/2
2nd Demain Des L'Aube
11/1
3rd Batcio
4/1 F
Ayr
15:35
Full Result
1st Mighty Thunder
8/1
2nd Dingo Dollar
7/1 F
3rd Mister Fogpatches
8/1
View All Today's Results