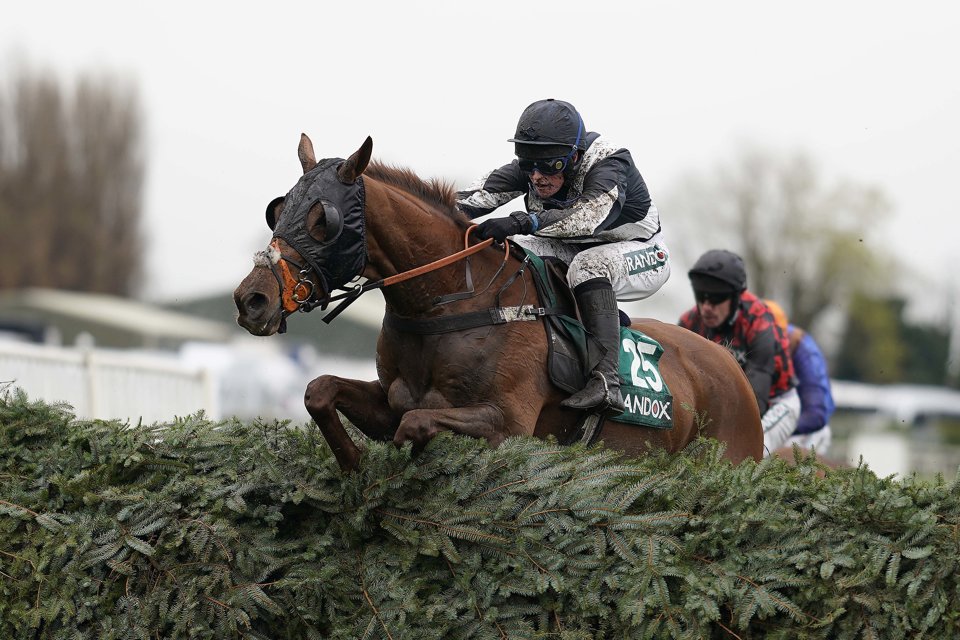 Run over the famous Grand National fences, the Foxhunters’ Chase at Aintree is for amateur riders, and regularly proves to be a thrilling spectacle.

With a large field and a host of difficult fences to negotiate, the Foxhunters’ tends to be a ferocious betting heat, and the latest odds for the Foxhunters’ Steeple Chase will be listed below just as soon as they become available.

You can find our tip for the Foxhunters’ Steeple Chase a little closer to the time.

What is the Foxhunters’ Steeple Chase?

The Foxhunters’ Chase is one of three races to be held over the National fences at the Grand National Festival, and is generally run on the first day.

Run over a trip of two miles and five furlongs, the race is contested by amateur riders, and sits alongside the Foxhunter Chase at the previous month’s Cheltenham Festival.

Runners regularly run in both, and the Cheltenham contest can serve as a key pointer to Aintree the following month.

What happened in the 2019 Foxhunters’ Steeple Chase?

The 2019 renewal of the Foxhunters’ Steeple Chase looked an open one, though Road To Rome was all the rage in the betting under National Course specialist Sam Waley-Cohen, having run an excellent race to finish fourth in the Cheltenham equivalent the previous month.

Road To Rome could only finish fifth, however, leaving the door open for 14/1 shot Top Wood, who pulled clear of the well-fancied Burning Ambition to win by two lengths.

Top Wood is top of the pack in The Randox Health Foxhunters' Open Hunters' Chase at @AintreeRaces!

That beaming smile from @tabithaworsley show what it means to win this race https://t.co/UIzMGnAg5T

The history of the Foxhunters’ Steeple Chase

Established in 1947, the race has enjoyed a long and interesting history, and was originally run over the full Grand National distance. It has been shortened since, and is usually run on the first day of the Grand National meeting.

A handful of horses have won this race on more than one occasion, though the only runner to win this three times is Credit Call - who did so in 1972, 1975 and 1976.

Who is the most iconic winner of the Foxhunters’ Steeple Chase?

We have seen some excellent winners of this race down the years, though there are perhaps none more iconic than Credit Call, who won the race on three occasions during the 1970s.

The gruelling nature of the Foxhunters’ means that even a dual winner of the race is rare, so the fact that Credit Call was able to win this in 1972, 1975 and 1976 is a remarkable achievement.

Are there any trials for for the Foxhunters’ Steeple Chase?

There are a number of hunter chase races around the UK and Ireland to follow through the season, and that will give punters an idea of the potential runners. It is also advisable to keep a close eye on the Foxhunter Chase at the previous month’s Cheltenham Festival - with a number of those horses likely to run at Aintree as well.

Who is the most successful jockey in the Foxhunters’ Steeple Chase?

Sam Waley-Cohen has a remarkable record over the Grand National fences, and has ridden the winner of this race on three occasions. The Gold Cup-winning rider has won the race on Katarino (2005 and 2006) and Warne (2014) at the time of writing.

Who is the most successful trainer in the Foxhunters Steeple Chase?

foxhunters-steeple-chase
£20 Risk Free First bet
Limited to one per person. If you’ve previously had a Paddy Power account, you will not qualify for the offer. Place your FIRST bet on any Sportsbook market and if it loses we will refund your stake in CASH. Max refund for this offer is  £20. Only deposits made using Cards or Paypal will qualify for this promotion. Paddy's Rewards Club: Get a  £10 free bet when you place 5x bets of  £10+. T&C's apply, 18+ begambleaware.org.
Bet £10 Get £30 in Free Bets
New customers using Promo Code P30 only, min £10/€10 stake, min odds 1/2, free bets paid as 2 x £15/€15 (30 days expiry), free bet/payment method/player/country restrictions apply. T&C's apply, 18+ begambleaware.org
Welcome Offer
Up to £100 in Bet Credits for new customers at bet365. Min deposit £5 and 1x settled bet requirement to release Bet Credits. Min odds, bet and payment method exclusions apply. Returns exclude Bet Credits stake. Time limits and T&C's apply, 18+ begambleaware.org.
Bet £10 Get £30 + 30 Free Spins
You must stake £10 or more at single/cumulative odds of Evens (2.0) or greater on your first bet. Free bet balance of £30 credited within 48 hours of your first bet being settled. Free Bets expire after 7 days. E-Wallet restrictions apply. Minimum 5 game rounds. Game restrictions apply. Maximum 30 Free Spins on selected games. Free Spins expire after 7 days. T&C's apply, 18+ begambleaware.org
Bet £5 Get £30
New Customers only. Deposit and place a £5 qualifying bet at odds of 2.00 or greater within 7 days of opening a new account; excludes cashed out bets. Receive 2x £10 Free Sports Bets, valid on set events only at odds 2.00 or greater, expires in 7 days, plus a £10 Casino Bonus, expires in 7 days. Wager the Casino Bonus 35x to withdraw winnings. Credit/Debit card deposits only. Geographical Restrictions and T&Cs Apply. Please Gamble Responsibly
Bet £10 Get £40
New customers only – £10 deposit using promo code "FOOTBALL" or "RACING"- First bet must be placed on any market - Minimum stake £10 at odds of 1/2 (1.5) - Free bets credited upon qualifying bet settlement and expire after 7 days - Free bet stakes not included in returns - Deposit balance is available for withdrawal at any time. General deposit method & withdrawal restrictions apply & Full T&C’s apply. 18+ begambleaware.org
Free £20 Exchange Bet
New customers only, bet up to €/£20 on the Exchange and if your first bet loses, we’ll refund you €/£20 in Cash. Bet must be placed in first 7 days of account opening. T&Cs apply, 18+ begambleaware.org
Up to £30 in Free Bets
New UK & Ireland Customers Only. Min Deposit: £/€10. 1 x wagering at odds of 1.75+ to unlock Free Bet. Credit Card, Debit Card & PayPal deposits only. T&C's apply, 18+ begambleaware.org
Bet £10 on Football & Get £30 Bonus + £10 Casino Bonus
New customers only. 18+, BeGambleAware.org. Minimum deposit £10. UK customers only. Place a £10+ bet on football of odds 1/1 (2.00) or greater to receive your 3x£10 in football free bets. Free bets will expire 7 days after your qualifying bet is settled. £10 Casino bonus will be credited the next working day after you have deposited. Casino bonus must be wagered at least 35x before any withdrawals can take place. T&C's apply, 18+ begambleaware.org
£25 Bet Bundle
18+ T&Cs apply. Cash stakes only. Min £10 stake required for initial £5 free bet. Min odds ½. Max £25 in free bets. Subsequent free bets equal 50% average of each 3 qualifying bets. 13 bets required to receive full £25 free bet. Qualifying bet must be placed within 30 days of opening account. Free bet expires after 7 days. Payment method restrictions apply. ** **18+. UK/IRE customers only. Max refund £20. Win or win part of e/w outright singles only. Min field size required. 1st bet on each race. Free bet expires after 7 days. Ante post bets after 9am 5/3/2019 qualify. Free/void bets don’t qualify. T&Cs apply.
OFFERS
ODDS
TIPS
NAPS