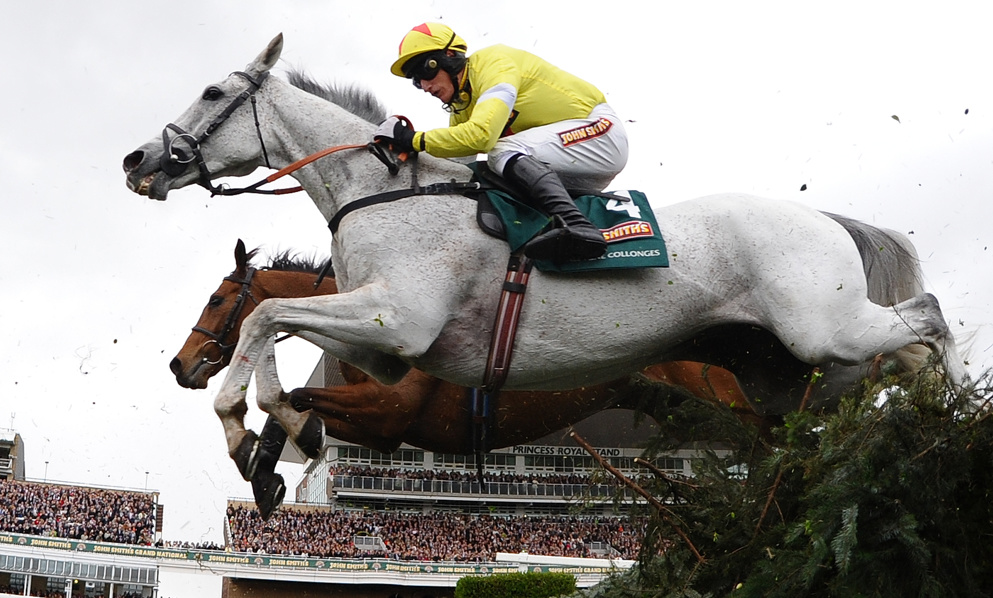 Neptune Collonges was the first grey horse to win the Grand National for 51 years back in 2012.

Daryl Jacob has admitted that he 'had no clue' whether he had won the 2012 Grand National at Aintree on Neptune Collonges, having battled to a thrilling photo finish with the Richie McLernon-ridden Sunnyhillboy...

The jockey, who was having his first ride on the grey horse in the big race itself, was looking back on his career in an exclusive interview with the HorseRacing from Home Podcast, and revealed that he was none the wiser whether he had managed to get up in the shadows of the post on the 11-year-old.

No horse had carried more than 11-05 to victory since the great Red Rum in 1977, but the Paul Nicholls-trained Neptune Collonges made steady progress into contention on the second circuit under a whopping weight of 11-06, and having gone around the elbow in third, he battled past Seabass and then Sunnyhillboy in the closing stages to snatch the race in a photo - in what remains as the closest-ever finish to the Aintree spectacular.

And Jacob revealed he was in the dark about whether he had got there. He said: “To be honest with you, I’ve been asked this thousands of times, and I didn’t have a clue. I had my head down, I was pushing, and I knew I was gaining on him - but Richie (McLernon) is a wonderful jockey as well, and he had his head down.

"The both of us - both horse and rider - were giving everything and when the two of us pulled up and looked at each other, none of us really had an idea of which way the verdict was going to go. The longer it went on for - which seemed like a life-time - I was thinking, ‘hopefully with a bit of luck we might have even dead-heated’, and when my number got called out it was unbelievable. Every jockey when they get into riding racehorses wants to participate in it, but to win it was an incredible feeling.

"The joy was fantastic, but I also get on really well with Richie and he’s a great pal of mine, and my heart sunk for him as well - so it was really weird mixed feelings for a little bit. But for me personally, I’m glad I was on the winning side, but also for Richie as a good friend of mine as well, it was a bit of a heartbreaker for him."

Jacob has a good record over the National fences, also finishing fourth on Philson Run in 2007 and sixth on Ucello Conti in 2016, and he revealed that the secret to his success revolves around getting his mounts into a good rhythm around the unique course.

He said: "The most important thing about riding over those fences is first of all not to think about racing, but more just getting the horse to relax and enjoy themselves, and get them into a really nice rhythm.

"If your horse is in a nice rhythm and is enjoying it, they will take you into the race, but if they're not enjoying it or not getting into rhythm, it’s a very difficult race to be in. So I always just go out there, and for the first circuit I just try to hunt the horses around and try to be in or around (the pace), and if I can get around the first circuit and the horse is enjoying it - then you can gradually eek that little bit more out of them and try and get into that position out of the Canal Turn.

Meanwhile, Jacob revealed that he kept a keen eye on this year's virtual equivalent of the Grand National, and admitted that it was a strange sensation watching himself ride around the unique fences; “It was very, very weird. If I’m being honest with you," he said. "I was actually more nervous watching that than actually riding around Aintree!"

"It’s not a position I’ve been in before, but I was sweating and was very nervous. Once we were on the second circuit, I was thinking the computer was riding (Bristol De Mai) exactly the way I’d liked to have ridden him in the race had I have had the opportunity, but once we’d jumped Becher’s and gone around the home turn and into the straight, I was very happy at five out with the position I was in.