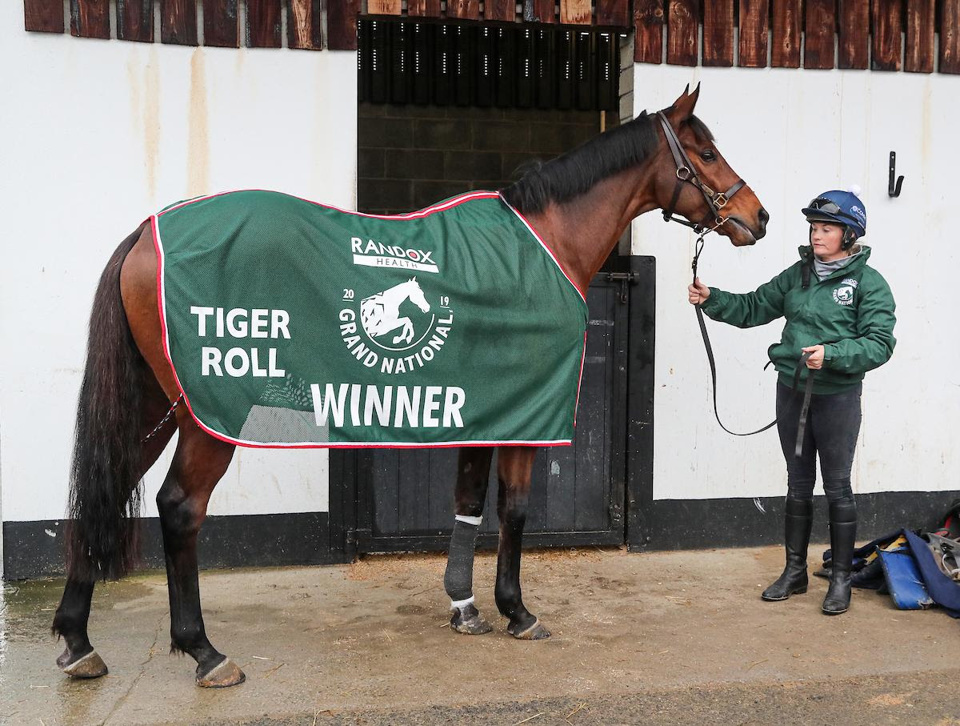 Gordon Elliott has renewed hope that Tiger Roll will bid for an historic third straight win in next year's Grand National, with a positive update on the nine-year-old's injury situation...

The outlook was looking far from positive when it was revealed that Tiger Roll had a chip removed from a joint just under a fortnight ago, meaning that he would likely be out of action until next year's Cheltenham Festival at the very earliest.

That, coined with his owner Michael O'Leary's very public reluctance to allow the nine-year-old to take his chance at Aintree next year if the handicapper - as expected - hands him top weight for next year's renewal, meant that a bid for the hat-trick seemed unlikely.

However, his trainer Gordon Elliott offered a positive update on his progress at a media day at his stables yesterday, and remains optimistic that he will be able to go to Merseyside with him next year.

He said: "Tiger Roll is making a good recovery and tomorrow week (Thursday, 5 December) the bandage comes off and he starts back walking. He will do three weeks walking and then, all being well, he will be back cantering steadily. He was in full fitness and ready to run when it happened so, while of course it is not ideal, it could have been a lot worse.

"The Boyne Hurdle (at Navan next February, which Tiger Roll won on reappearance last year) is where we would love to go but if that doesn't work out there is a good chance he could go straight to Cheltenham for the Cross Country Chase.

"The Randox Health Grand National is the plan. Obviously, Michael O'Leary owns the horse and will make the final decision but, in my mind, it is the race we have been training him for ever since he won it last year."

Back-to-back Grand Nationals and a place in history https://t.co/vcF6v9JEOL

Tiger Roll is bidding to become just the second horse in history to win the Grand National three times after the great Red Rum in the 1970s, and Elliott is bullish about his chances of creating history if he does indeed take his chance at Aintree;

"He carried 11-05 when he won last season. We are not stupid and know we are going to have top-weight (11-10) this time and it is just a question of how the weights are going to be compressed. The handicapper has got his job to do and I am sure he is going to be fair with everyone. Would Tiger Roll have won with 5 lb more last season? I think he probably would have.

"It is frightening what he did last year really. When he got the blinkers on him, he was a different horse and you could say he was the best he ever was last season. His win in the Boyne Hurdle was awesome and he was brilliant in the cross country at Cheltenham. Then his win in the Randox Health Grand National looked a better performance than it was the year before.

"Tiger Roll is just a legend of a horse. He has won two Grand Nationals and four times at the Cheltenham Festival - he is the horse of a lifetime and we are just so lucky to have him. Everyone knows and loves him and he is such a character. He has a great name and loves everyone coming to see him and patting him in his stable.

"Whenever anyone comes to visit, the horse they all want to see is Tiger Roll. He is not a big horse although is not as small as everyone says - he is compact and has the right bits in the right places."

Tiger Roll is currently a general 6/1 favourite for next year's Grand National at Aintree, with the Willie Mullins-trained Burrows Saint next in the market at a general price of 16/1, while it's 25/1 and bigger about the remainder of this year's potential candidates.