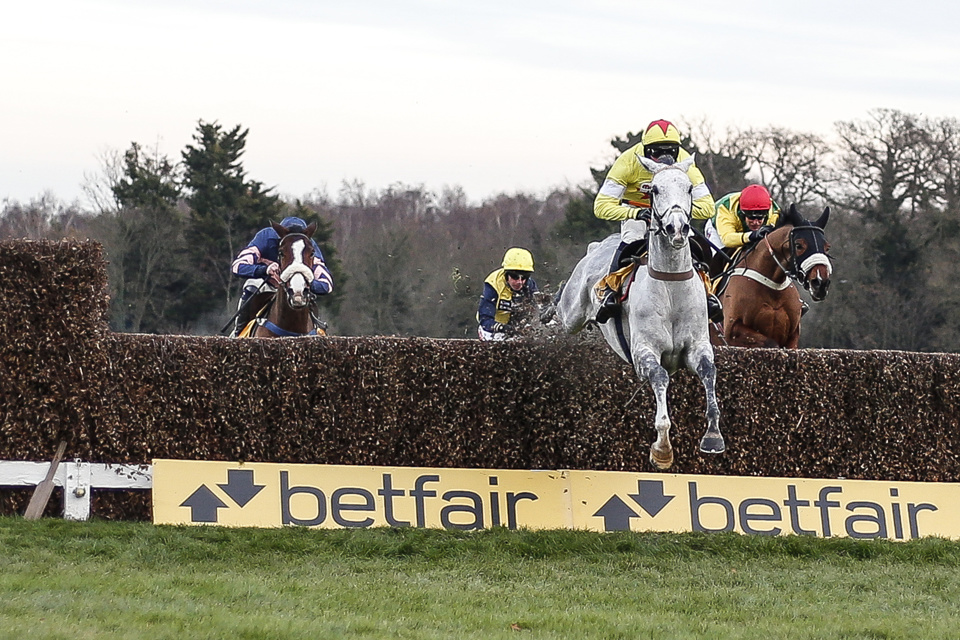 Politologue was a decisive winner of the Haldon Gold Cup in 2018.

Run over a trip of two miles and one and a half furlongs, the Haldon Gold Cup is an early season midweek treat for Jumps racing fans.

Held on the first Tuesday in November, it regularly serves as a starting point for chasers who are potentially looking to make up into candidates for either the Queen Mother Champion Chase or the Ryanair Chase. You can find the latest odds for the 2020 Haldon Gold Cup here a little closer to the time.

You can check out our tips for the Haldon Gold Cup here....

What is the Haldon Gold Cup?

The Haldon Gold Cup is a Grade 2 contest, run over a distance of two miles and one and a half furlongs at Exeter - traditionally on the first Tuesday in November each year.

The race is popular with punters as it is one of the very few Graded contests in Britain to be held during the week, and it regularly attracts a smart field as a consequence. Previous winners include the Champion Chase winner Politologue (2017),  Gods Own (2014 and 2018) and Cue Card (2012).

What happened in the 2020 Haldon Gold Cup?

Greaneteen was a gutsy winner of the 2020 Haldon Gold Cup, as the Paul Nicholls-trained favourite reeled in Moonlighter in a pulsating finish to the Grade 2 contest at Exeter. Having looked beaten as Moonlighter pulled a length clear at the final fence, Greaneteen picked up impressively in the final furlong and eventually soared past Moonlighter to claim the win. Pink Eyed Pedro finished best of the rest in third position.

Greaneteen rallies to land a thrilling Haldon Gold Cup and bring up a magnificent seven in this race for @PFNicholls.

New customer offer, Min single £10 Sportsbook bet on the 11:45 Newcastle, 28thNovember ('Win or E/W' market only). £10 free bet for the remaining Sat Newcastle races. Deposits using cards or Apple Pay only. T&Cs apply. 18+ begambleaware.org
get offer
Bet £10 Get £40 in Free Bets
New customers using promo code C40 only. 1x per customer. Min £10/€10 bet. Min odds 1/2 (1.5). Free bets paid as 2x £15/€15 (expires after 30 days). Max £10 Bonus. 35x wagering requirement. Max redeemable amount £25. Casino bonus expires 72 hours from issue. Eligibility rules, free-bet rules, game, location, payment-method, currency restrictions, stake contributions and terms and conditions apply. 18+ begambleaware.org.
£20 Risk Free First Bet Money Back In Cash
New customers only. Place your FIRST bet on any sportsbook market and if it loses we will refund your stake in CASH. Max refund for this offer is €/£20. T&Cs apply. 18+ begambleaware.org
Welcome Offer
Open Account Offer. Up to £100 in Bet Credits for new customers at bet365. Min deposit £5. Bet Credits available for use upon settlement of bets to value of qualifying deposit. Min odds, bet and payment method exclusions apply. Returns exclude Bet Credits stake. Time limits and T&Cs apply. The bonus code ‘100BET365’ can be used during registration, but does not change the offer amount in any way. 18+ begambleaware.org.
Bet £10 Get £30 + 60 Free Spins
New UK & NI customers only. Promo code SPORTS60. Deposit and place first sports bet of £10+ in one transaction, at odds of Evens (2.0)+, settled within 60 days. First bet must be on Sports. £30 in Free Bets credited within 48 hours of bet settlement. 7-day expiry. Payment restrictions apply. SMS validation may be required. Max 60 Free Spins on Justice League Comics. 7-day expiry.  Full T&Cs apply. 18+ begambleaware.org
Bet £10 & Get £30 Free Bets + £10 Casino Bonus
Minimum deposit of £10 using deposit code 30F - A qualifying bet is a ‘real money’ stake of at least £10 placed on any sports market - Minimum odds of 1/2 (1.5) - Free bets credited upon qualifying bet settlement and expire after 7 days - Free bet stakes not included in returns - Casino Bonus must be claimed within 7 days • To withdraw bonus/related wins, wager bonus amount x40 within 14 days • Wagering req. vary by game • Withdrawal restrictions and Full T&C’s apply. 18+ begambleaware.org
Bet £10 Get £20
18+ New Customers only. Deposit, opt in and place a £10 qualifying bet at odds of 2.00 or greater within 7 days of opening a new account; excludes cashed out bets. Receive a £10 Free Sports Bets, valid on set events only at odds 2.00 or greater, expires in 7 days.  Plus a £10 Game Show Bonus, selected games, wager 40x to withdraw a max of £250. PayPal and Card Payments only. Geographical Restrictions and T&Cs Apply. Please Gamble Responsibly.
£25 Bet Bundle
18+. UK Customers (Excluding NI) only. Cash stakes only. Min £10 stake required for initial £5 free bet. Min odds ½. Max £25 in free bets. Subsequent free bets equal 50% average of each 3 qualifying bets. 13 bets required to receive full £25 free bet. Qualifying bet must be placed within 30 days of opening account. Cashed out bets will not qualify towards your average stake. One free bet offer per customer, household or IP address only. Free bet expires after 7 days. Payment method restrictions apply. T&Cs apply.
Money back As A Bonus Up To £40 If Your First Racing Bet Loses + £10 Casino
New customers only. 18+, BeGambleAware.org. Min deposit £10. Money back as bonus. Wagering requirements: Racing 3x at min. odds of 1.40 (2/5), Casino 35x. Only one bonus can be used at a time, Racing bonus must be wagered before using the Casino, unless the bonus has been forfeited. Bonus will expire after 7 days of opt-in. #ad