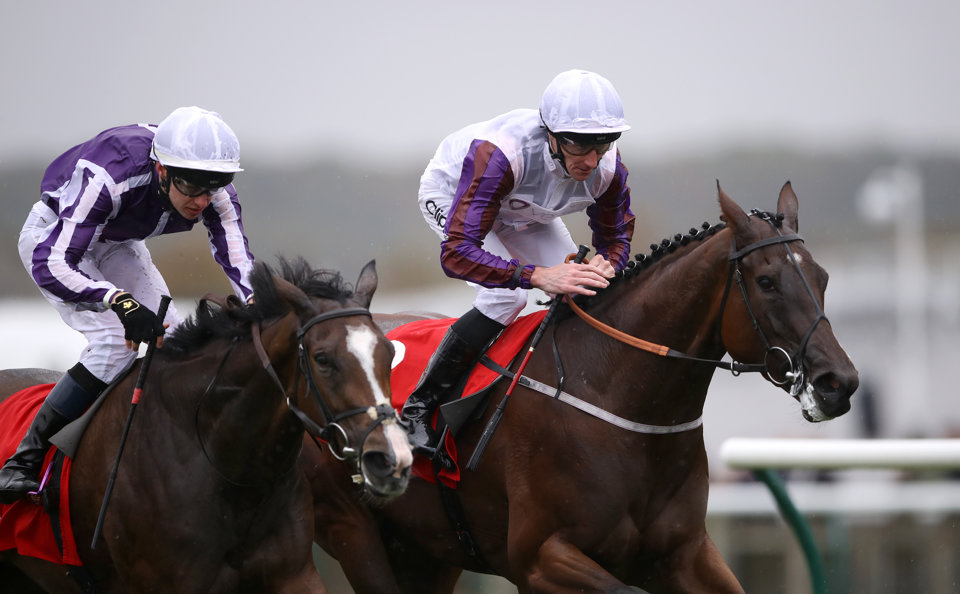 A Group 1 race for fillies and mares aged three and over, the Sun Chariot regularly proves to be a lively betting heat, and you can find the odds for the 2021 renewal a little closer to the time.

You can check out our Sun Chariot Stakes tips here...

What is the Sun Chariot Stakes?

The Sun Chariot Stakes is a Group 1 race for fillies and mares aged three and up, and is run over a trip of one mile at Newmarket at the beginning of October each season. Three-year-olds have a tremendous record in the race, failing to win it on just ten occasions since it was incepted in 1966.

Punters have enjoyed a good spell in the Sun Chariot Stakes, with six favourites obliging this decade. The race was originally held on the same day as the Cambridgeshire Handicap at the same course, but was switched to a meeting a week later back in 2014.

What happened in the 2020 Sun Chariot Stakes?

John Gosden's Nazeef claimed her second Group 1 of the season, as the Falmouth Stakes heroine produced a fine late surge to claim victory in the Sun Chariot Stakes at Newmarket in early October. Jim Crowley was forced to get very busy in the saddle in board the 17/2 shot, but the daughter of Invincible Spirit picked up for her jockey's urgings and went on to beat Half Light and Cloak Of Spirits in impressive fashion to claim another notable victory at Flat HQ.

Nazeef has enjoyed a fine season and bounces back in the Kingdom Of Bahrain Sun Chariot Stakes for Jim Crowley, John Gosden and @ShadwellRacing 👏@NewmarketRace

The history of the Sun Chariot Stakes

Established in 1966, the Sun Chariot Stakes was originally run over a distance of ten furlongs (one mile and two furlongs) and was open to just three-year-olds, before being opened up to older fillies and mares in 1974. The race is named after Sun Chariot, who won the fillies' Triple Crown in 1942, when all three of the races were held at Newmarket due to World War Two.

The race remained at ten furlongs for the remainder of the century, before being reduced to a mile in 2000. It was soon promoted to Group 1 status in 2004, when Attraction came out on top for the Mark Johnston team. The most recent change to the race came in 2014, when it was switched from the Cambridgeshire Meeting at the same track to a fixture one week later.

Who is the most iconic winner of the Sun Chariot Stakes?

The Sun Chariot Stakes has a rich history and has been won by some excellent horses since it was first run in 1966.

The race tends to be won by a top-drawer filly, especially since it was promoted to Group 1 level in 2004, but there is no doubt that the stand-out name on the roll of honour is Saphresa. Unraced as a two-year-old, Saphresa hit the headlines in 2009 when winning the Newmarket race for the first time at a price of 16/1.

The Rod Collet-trained star was far shorter when winning at 9/2 the following season, and was 13/8 for her third and final victory in the race in 2011. The French star always seemed to save her best for October in Suffolk with her hat-trick of victories ensuring she remains a legend of the Sun Chariot.

Are there any trials for the Sun Chariot Stakes?

Considering the excellent record that three-year-olds have in the race, it seems logical to keep an eye on the classic generation throughout the season. The 1000 Guineas is a solid starting point, and several key players from the 2018 Guineas went on to take their chance in the Sun Chariot later in the season. Other races of interest include the Coronation Stakes at Royal Ascot, the Falmouth Stakes at Newmarket and the Prix Rothschild at Deauville. The older fillies and mares could also use the Falmouth and the Rothschild as push-off points, while the Duke of Cambridge Stakes at Royal Ascot is another race of interest.

Who is the most successful jockey in the Sun Chariot Stakes?

Who is the most successful trainer in the Sun Chariot Stakes?

#AD New bettors only; Valid from 14/07/2022 09:00 GMT to 14/08/2022 23:59 GMT; Deposit (no Skrill/Neteller) and place your FIRST bet on any UK/IRE horse racing market at odds of 4/5 on singles or 2/5 per leg for acca; If your bet loses, get your stake back as a free bet of up to £20; Free bet valid for 7 days; Bet types restrictions; Terms apply; 18+ begambleaware.org
get offer
Bet £10 Get £30 In Free Bets
#AD 18+. Play Safe. New customers using Promo code H30 only, Min £10/€10 stake,  min odds 1/2, free bets paid as 2 x £15/€15, free bets credited after  settlement of first qualifying bet, free bets will expire 30 days after  the qualifying bet is placed, payment method/player/country restrictions apply.
Bet £10 Get £30 Free Bets (APP Only)
#AD New UK, IE & Malta customers only. 18+. Min £10/€10 first deposit using Debit Card or Trustly. Place a bet of £10 at min odds of 1.5. Free bets expire in 90 days. Full T&Cs apply.
Welcome Offer
#AD Bet £10 & Get £50 in Free Bets for new customers at bet365. Min deposit requirement. Free Bets are paid as Bet Credits and are available for use upon settlement of bets to value of qualifying deposit. Min odds, bet and payment method exclusions apply. Returns exclude Bet Credits stake. Time limits and T&Cs apply.
Bet £10 Get £60 in Bonuses
#AD New UK customers only. Register using the promo code BETFRED60, deposit and place first bet of £10+ on Sports (cumulative Evens+) within 7 days of registration. First bet must be on Sports. £20 in Free Bets to be used on Sports, £10 in Free Bets to be used on Lotto and 50 Free Spins (20p per spin) credited within 48 hours of bet settlement. Further £20 in Free Bets credited 5 days after settlement. Bonuses have a 7-day expiry. Payment restrictions apply. SMS verification and/or Proof of I.D and address may be required. Full T&Cs apply.
Bet £20 & Get It Back As CASH If It Loses
#AD New customers only. Place your FIRST bet on any Horse Racing market and if it loses we will refund your stake in CASH. Max refund for this offer is £20. Only deposits made using cards will qualify for this promotion. T&Cs apply.
Money Back As Cash Up To £20
#AD Max £20 refund on first bet. Bet must be placed in first 7 days of account opening. Only deposits made via Debit Card will be eligible for the promotion. T&Cs apply. 18+ begambleaware.org
Bet £10 Get £30 Free Bets + £10 Casino Bonus
#AD Minimum deposit of £10 using deposit code 30F - A qualifying bet is a ‘real money’ stake of at least £10 placed on any sports market - Minimum odds of 1/2 (1.5) - Free bets credited upon qualifying bet settlement and expire after 7 days - Free bet stakes not included in returns - Casino Bonus must be claimed within 7 days • To withdraw bonus/related wins, wager bonus amount x40 within 14 days • Wagering req. vary by game • Withdrawal restrictions and Full T&C’s apply. 18+ begambleaware.org
£41 In Bonuses
#AD Place a £25 fixed odds bet at minimum odds of 1/2. Get 5 x £5 free fixed odds bets + 2 x £5 free Winning Favs spread bets + 50 spins on Starburst + a £1 Race Index spread bet. Free bets and spins must be claimed within 28 days of opening. Free bet/spin stake not included in any winnings. Ts&Cs Apply. 18+ begambleaware.org
Bet £10 Get £20 In Free Bets
#AD Min stake £10. Min odds 1/2 (1.5). First bet only. Free bets expire in 7 days. Cashed out bets won’t apply. Payment method restrictions. Online UK customers only. 30 days to qualify for £20 in Free Bets. 18+. T&Cs apply
£25 Free Bet + 10 Free Spins
If your account has Sportsbook losses at the end of your first day's betting, QuinnBet will refund 50% of your losses as a Free Bet up to £25 (min 3 bets) Plus 10 Free Spins on Asgard Warriors. Even if your account is up, you're guaranteed a £5 Free Bet Plus 10 Free Spins provided you place at least 1 bet of £10 or greater at the minimum odds. T&Cs apply | 18+ New UK Customers Only | BeGambleAware.org
Latest racing results
Carlisle
20:35
Full Result
1stMartin's Brig
100/30
2ndRegal World
6/1
3rdYeeeaah
5/2F
Chelmsford
20:15
Full Result
1stAsraabb
6/1
2ndEngrave
11/1
3rdFlower Of Thunder
14/1
Carlisle
20:00
Full Result
1stAlbeseeingyer
13/2
2ndHardy
6/1
3rdBastille
5/4F
View All Today's Results