Christmas action from Kempton and Leopardstown to provide Cheltenham clues 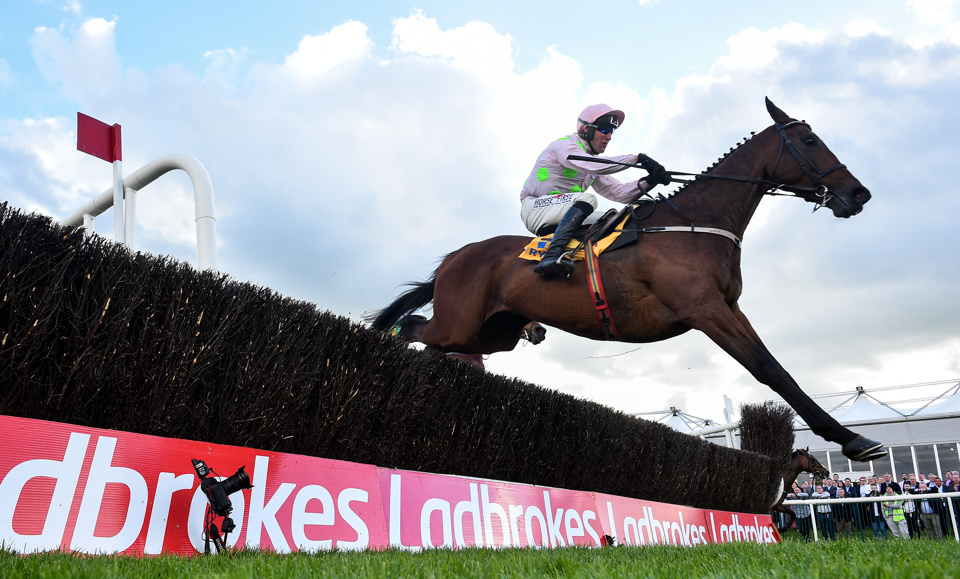 Steve Chambers looks at a busy festive period of National Hunt racing in the UK & Ireland, where a host of Cheltenham Festival clues shall emerge from both Kempton Park and Leopardstown...

Racing fans shall be forced to watch all the action from the comfort of their own homes this Christmas, as the Coronavirus pandemic will sadly keep racegoers away from the track, but there's set to be a magnificent few days of National Hunt action bringing some festive joy to our televisions, as some of the superstars of the sport emerge.

There's set to be some spectacular jumping action at Kempton Park and Leopardstown over the coming days, and while the top notch races are big in their own right, they will provide some vital pointers to the Cheltenham Festival, where reputations will be enhanced and bubbles will be burst! So, let's take a look at the races that will provide some notable Cheltenham Festival clues, and pick out those horses that are set to sparkle...

Two facile novice chase victories at Wetherby has launched Dan Skelton's Shan Blue into the RSA Chase picture, but the exciting six-year-old will face his toughest test to date on Saturday when he takes on Colin Tizzard's The Big Breakaway and Harry Fry's If The Cap Fits in a fascinating renewal of the Grade 1 Kauto Star Novices' Chase. Those brace of Wetherby successes have been over a combined distance of 30 lengths and has earned Shan Blue quotes of 25/1 for the RSA, but in The Big Breakaway he faces a rival that has been touted as a potential future Cheltenham Gold Cup star.

Tizzard's charge is as short as 12/1 for the RSA and showed his class when winning comfortably at Cheltenham In November, but failed to follow up over an inadequate trip of 2m 3f 48y at Exeter, so a return to three miles should see him at his best. Former Grade 2-winning hurdler If The Cap Fits add more depth to the race, but he was beaten at Sandown last time out, which saw him drift to 25/1 for the RSA. Enrilo and One For The Team are another eye-catching duo in a fascinating renewal.

Arguably the banker of the entire Christmas period appears to be Champion Hurdle heroine Epatante, who is a red-hot favourite for the Grade 1 Christmas Hurdle at 14:25 at Kempton Park. As short as 1/4 with some firms, Nicky Henderson's mare is bidding for a second win in the contest, and a comfortable victory will cement her place at the head of the 2021 Champion Hurdle betting. A warm order for that Cheltenham Festival event, Epatante will face a classy rival in the shape of Silver Streak (33/1 for Champion Hurdle), but the grey was well beaten in last year's Christmas Hurdle, when finishing a distant second, and it can be a similar one-two in Saturday's renewal.

For many the King George VI Chase is the showpiece event of the entire Christmas period, and this year's renewal is set to see the Paul Nicholls-trained duo of reigning champion Clan Des Obeaux and impressive Charlie Hall Chase winner Cyrname lock horns in an epic battle of Ditcheat. A race that is often one of the vital form guides for the Cheltenham Gold Cup, and while Clan Des Obeaux isn't set to feature in the March event, Cyrname is looking to throw his hat into the Gold Cup win with a notable success at Kempton.

However, the biggest Gold Cup form line will be that of Santini, who was supplemented for the King George at the start of the week, and adds an intriguing depth to the race. The dour Nicky Henderson-trained stayer finished a gutsy runner-up in last season's Cheltenham Gold Cup, but failed to kick off his campaign with a win, as he was beaten at Aintree in the Many Clouds Chase. It's common knowledge that Kempton may not play to his strengths, as he is a horse that relishes a stamina test, and he is sure to be seen at his best at Cheltenham in March. But, if he can perform with credit in the King George then his current 8/1 odds for the Gold Cup may shorten considerably.

Cyrname is currently a 16/1 chance for the blue riband event at the Cheltenham Festival, while Colin Tizzard's Lostintranslation is also available at 16s, but will need to bounce back from a poor display in the Betfair Chase last time out. Real Steel (50/1 for Gold Cup) and Frodon (50/1) add more depth to the Nicholls team, but both may struggle to deliver in the King George and in the Gold Cup, and Saturday's race is set to be dominated by the fancied horses in the betting.

A stellar few days of action lights up Leopardstown at the end of December and the first feature race is the Grade 2 Knight Frank Juvenile Hurdle, which will see current Triumph Hurdle favourite Zanahiyr line up for Gordon Elliott. As short as 4/1 for the Friday curtain-raiser at the 2021 Cheltenham Festival, Zanahiyr has been all the rage in the juvenile division this season, and he is an odds-on jolly to prevail in Saturday's test and cement his place at the head of the Triumph betting.

Douvan was the last horse to win the Racing Post Novice Chase and Arkle Challenge Trophy in the 2015/16 campaign, but it shall be a feat Gordon Elliott's Felix Desjy is attempting, as he lines up at Leopardstown on Saturday. A 16/1 third favourite for the Arkle, Felix Desjy will need to produce a faultless display if he is to get close to Shishkin in the Arkle betting, but Elliott's charge has some class about him and looks the one to beat. Willie Mullins, who saddled Douvan to victory, will unleash a dual-pronged attack in the shape of Blackbow and Franco Du Port, but that pair are 33/1 for the Arkle, so are less fancied than Elliott's raider.

The aforementioned Shishkin is set to strut his stuff at Kempton the following day at Kempton on December 27 and the current Arkle favourite will be sent off at prohibitive odds for the Wayward Lad Novices' Chase. A race won by Altior back in 2016 en route to 2017 Arkle glory, Shishkin will follow the same path as the Nicky Henderson-trained icon and success in the Wayward Lad could see Shishkin's Arkle price plummet further. Gumball (25/1 for Arkle) and Tamaroc Du Mathan (40/1 for Arkle) are the Seven Barrows raider's most likely dangers on Sunday afternoon.

A busy day for the Henderson operation continues just over an hour later and he will have another red-hot favourite in the shape of Altior, who is bidding for a second win in the Desert Orchid Chase. Having missed last season's Cheltenham Festival, the dual Champion Chase hero is currently second favourite behind Chacun Pour Soi in the 2021 Champion Chase betting, but a win on Sunday will see him get closer to WIllie Mullins' class act in that market. Taking on the likes of Duc Des Genievres and Rouge Vif, who are both 20/1 for the Champion Chase, Altior (7/1 for Champion Chase) will have to perform to a high level, but the multiple Grade 1 winner can brush those rivals aside and show the fire still burns bright.

It's a big day for Willie Mullins on Sunday as he saddles some of his star performers, who are looking to enhance their Cheltenham Festival claims. Potentially saddling former Supreme Novices' Hurdle hero Klassical Dream in a beginners' chase at the start of the afternoon, attentions quickly turn to one of this star performers, as Chacun Pour Soi lines up in the Paddy's Rewards Club Chase. The current ante-post favourite for the Champion Chase, Chacun Pour Soi produced a satisfactory returning success in the Hilly Way Chase earlier this month at Cork, and he will look to build on that effort on Sunday. Available at 11/4 for the Champion Chase, Chacun Pour Soi will be an odds-on jolly for Sunday's test, but in Notebook (16/1 for Champion Chase) and Put The Kettle On (8/1 for Champion Chase) he will potentially take on two very smart chasers in a thrilling renewal.

Some vital Supreme Novices' Hurdle and Ballymore Novices' Hurdle clues could emerge from Leopardstown on Sunday as the Willie Mullins-trained Appreciate It and Gordon Elliott's Ballyadam could do battle in a rip-snorting clash. The former is currently 6/1 for the Ballymore, while Elliott's charge is a 6/1 favourite for the Supreme, and Sunday's Grade 1 test over two miles should provide some must-see pointers for both contenders. Appreciate It is expected to relish the longer trip of the Ballymore, but he is still a 14/1 chance for the Supreme, so if he can excel over two miles then the Mullins team may opt to run him in the Cheltenham Festival curtain-raiser. Similarly, Ballyadam is available at a relatively short price of 12/1 for the Ballymore, so if he is tapped for toe then he may be targeted at the Ballymore. There's a lot to learn from their potential clash, and there will be lot to decipher in the aftermath.

All class from Chacun Pour Soi on his reappearance in the €70,000 feature at @corkracecourse under @PTownend https://t.co/jbm4EDOyfx

Dual Pertemps Final winner Sire Du Berlais is destined for a tilt at the Stayers' Hurdle at the 2021 Cheltenham Festival, and the JP McManus-owned star is set to put his credentials on the line on Monday in the Grade 1 Christmas Hurdle. A 7/1 third favourite behind Paisley Park and Thyme Hill, Sire Du Berlais will face some notable opposition in the shape of Fury Road (12/1 for Stayers) and Ronald Pump (20/1 for Stayers), but the progressive Gordon Elliott raider should have too much class for his rivals.

Exciting chaser Minella Indo is set to line up in the Savills Chase, which shall offer some clues to the 2021 Cheltenham Gold Cup and is one of the feature races of Leopardstown's Christmas extravaganza. Locking horns with the likes of Presenting Percy and Delta Work in a mouth-watering Savills Chase, Minella Indo is the likely favourite and the current Cheltenham Gold Cup second favourite can produce a fine display to put pressure on Al Boum Photo at the head of the Gold Cup betting. Available at 8/1 for the Gold Cup, Minella Indo looks a real class act over fences and Henry De Bromhead's charge can lay a marker down to Al Boum Photo, who is set to line up on New Year's Day at Tramore.

Already a red-hot 3/1 favourite for the RSA Chase, last year's Albert Bartlett Novices' Hurdle hero Monkfish will look to make it two wins from two over fences when he lines up in the Neville Hotels Novice Chase on Monday at Leopardstown. A dour stayer, the Willie Mullins-trained star produced a very taking chasing debut earlier in the year, and should be able to dispatch of the classy pair of Conflated and Latest Exhibition with aplomb.

Nicky Henderson's Epatante dominates the Champion Hurdle, but there could be a decent Irish contingent heading over to try and down the classy mare on the opening day of the Cheltenham Festival, and two smart prospects in Saint Roi and Abacadabras are set to lock horns on Tuesday. The pair fought out a sensational finish in the Morgiana Hurdle earlier in the season, with Abacadabras just prevailing, and both are 8/1 for the Champion Hurdle. Set for another epic duel, the winner of the Matheson Hurdle next week should propel into outright second favouritism for the Champion Hurdle in March.