Ferny Hollow, ante-post favourite for the Arkle Challenge Trophy is one of 24 horses entered for the Grade 1 novice chase, which is one of the highlights on the opening day of the Cheltenham Festival on March 15. With the entries announced today, we take a look at those set to line up in the 2m contest...

A mightily-impressive winner over subsequent Supreme Novices' Hurdle winner Appreciate It in the 2020 Champion Bumper, Ferny Hollow's career went to even greater heights when he beat the top class Bob Olinger in a mouth-watering maiden hurdle at Gowran Park back in November 2020. However, it was the last we saw of the Willie Mullins-trained raider over hurdles, as injury saw him spend a considerable amount of time on the sidelines, and he wasn't seen on a racecourse until December 2021.

His comeback run came over fences, with the Mullins team set to target the Arkle at the 2022 Cheltenham Festival, and Ferny Hollow showed he still oozes class, as he cruised to four length win of a beginners chase at Punchestown. Three weeks later he duly made it two from two over fences as he won the Grade 1 Racing Post Novice Chase at Leopardstown, and that win saw his price cut for the Arkle. With all systems go for the festival in March, Ferny Hollow is already a warm 6/4 favourite for the Arkle, and he is no doubt the standout entry.

Alan King trained Voy Por Ustedes (2006) and My Way De Solzen (2007) to glory in the Arkle, and the Barbury Castle handler has another smart two-miler on his hands in the shape of Edwardstone, who is set to the fly the flag for the British-trained raiders here. A smart hurdler, the eight-year-old has blossomed since switching to fences, and has won his last three over the larger obstacles. A runaway 16-length winner of the Grade 1 Henry VIII Novices' Chase at Sandown Park, Edwardstone then enhanced his reputation with a comfortable win in the Wayward Lad Novices' Chase at Kempton Park over Christmas, which cemented his place as the premier two-mile chaser on British soil, and he's set to feature here. 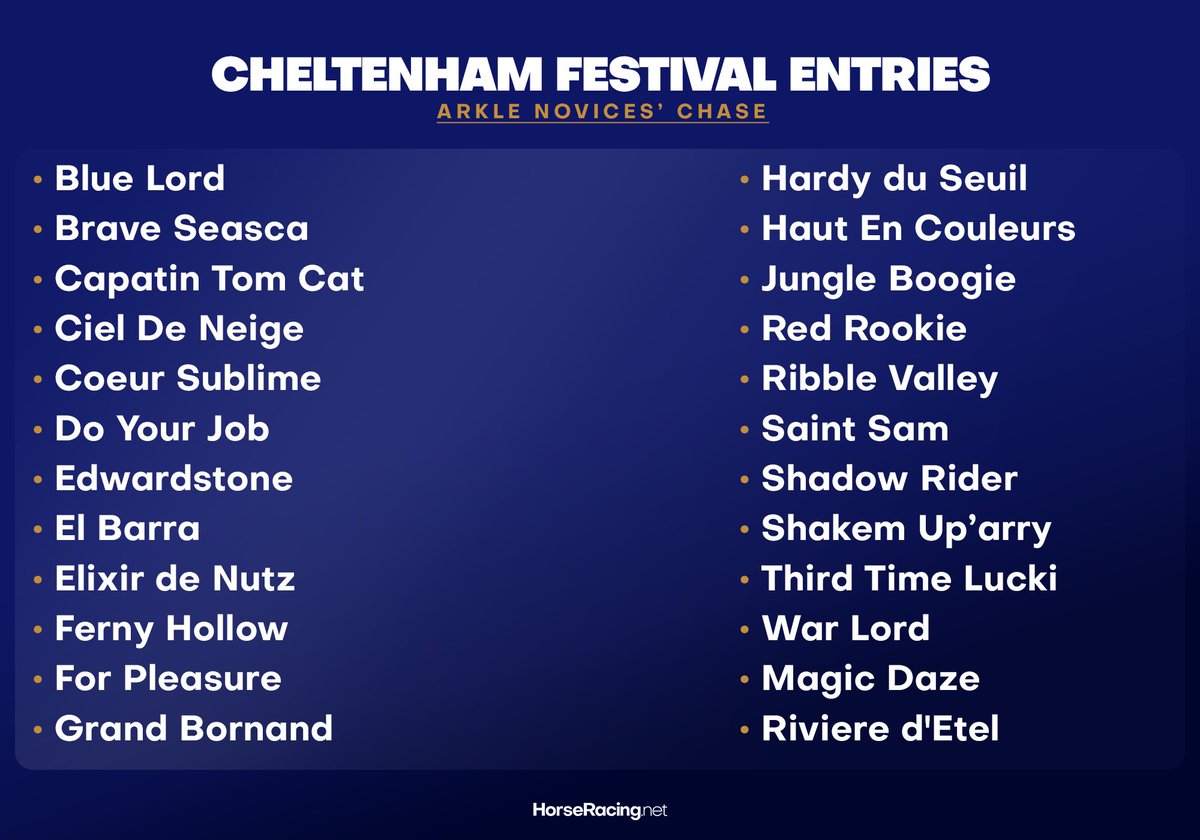 The entries for the Arkle are out!

24 currently in it, can anyone beat Ferny Hollow? 🏆

Willie Mullins, who has saddled four of the last seven winners of the Arkle, has an embarrassment of riches in the novice chase division, and he holds nine of the 24 entries. Undoubtedly Ferny Hollow will be the number one, but Blue Lord, who was a later faller in last year's Supreme Novices' Hurdle has made an unbeaten start to his chasing career, and at 5/1 he's another fancied contender for the Co. Carlow team.

Gordon Elliott is yet to taste victory in the Arkle, but in Riviere D'etel he has a really smart mare that will be in receipt of weight from her male counterparts here. But, she was well beaten by Ferny Hollow when they clashed earlier in the season, so she will need to improve on that effort here.

Others worthy of a mention in the line-up include Dan Skelton's Third Time Lucki, who was well beaten by Edwardstone in the Henry VIII last time out, but he is a classy performer, while Elixir De Nutz and Magic Daze are another brace of notable names in what is set to be a thrilling renewal.