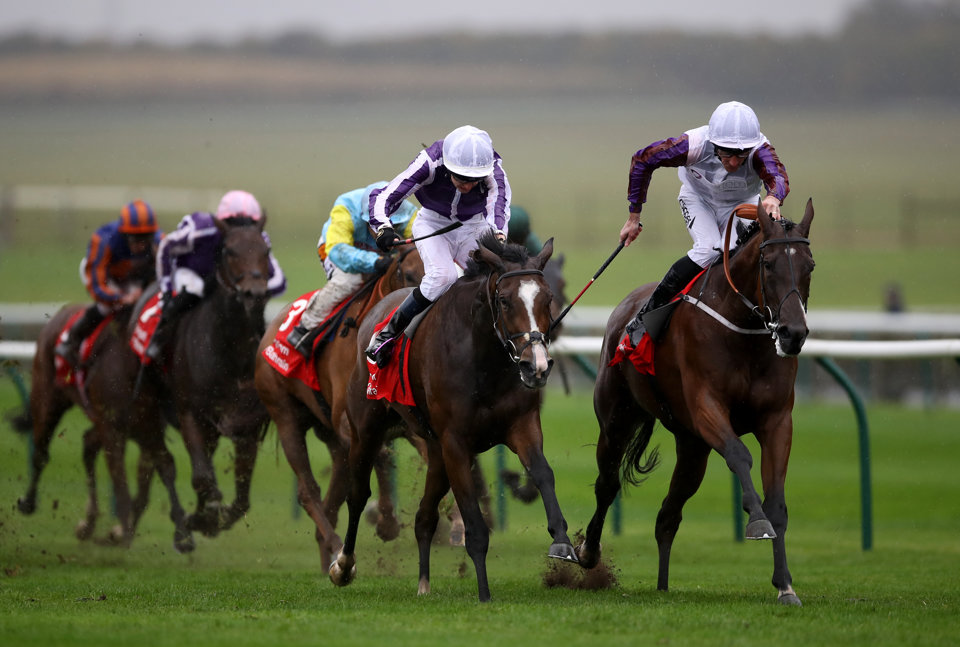 Cambridgeshire Meeting Day 3 Tips: Check out our three tips at Newmarket on Saturday.

There's a stunning day's racing at Newmarket on Saturday, as day three of the Cambridgeshire meeting takes centre stage, and our in-house tipster Steve Chambers has picked out three tips for the top notch action at Flat HQ...

Not since 2004 have Godolphin tasted victory in the Royal Lodge Stakes, but the boys in blue can strike gold in Newmarket's Group 2 contest on Saturday, as the Charlie Appleby-trained COROEBUS can bound to glory in the 1m event. The son of Dubawi produced a fine display on debut as he eased to a one-and-a-quarter length win in a Newmarket maiden over a mile, and he shaped like there's a lot more to come.

This will be a huge step up in grade for Appleby's raider and he will have a lively adversary in the shape of Andrew Balding's Masakela, who was last seen beating subsequent Champagne Stakes winner Bayside Boy in a Listed event at Newbury. However, he was all out that day, and the step up to a mile may just halt his momentum and chances of landing back-to-back wins, and he's awfully short at the head of the market.

On the contrary, Coroebus has shown he can already see out the mile trip, and it could be he is sent over further in the future, but with a red-hot William Buick in the saddle, the exciting juvenile can build on a fine maiden victory and make it two wins from two at Newmarket, and at second favourite looks to be the better value against Balding's charge.

Unbeaten filly Sacred Bridge will attempt to extend her 100% record to five wins from five outings when she lines up in the Group 1 Cheveley Park Stakes at Newmarket on Saturday afternoon. Imperious during her fledgling career, the Ger Lyons-trained filly will face her toughest task to date, as she takes on a plethora of exciting two-year-olds, but she's worthy of clear favouritism in this event and will be tough to beat.

As short as 6/4 with some bookmakers, Sacred Bridge could be worth taking on with an alternative value play and the one that catches the eye is the once-raced TENEBRISM, who is bidding to enhance Aidan O'Brien's excellent recent record. The Ballydoyle handler has trained three of the last five winners of this race, and he will be solely represented by the exciting daughter of Caravaggio.

She was mightily impressive when easing to a three-and-three-quarter length win in a Naas maiden event back in March, and while a significant break off the track is a slight worry, O'Brien wouldn't try her at this level unless he felt she could land a significant blow. Available at double-figured odds, Tenebrism is worth watching in the market, as a significant move in the betting would be a huge boost and she oozes potential as she takes on some proven Group performers. This could come too soon in her career, but the manner in which she landed that Naas prize suggests O'Brien could have a top filly on his hands and Tenebrism is worth siding with here.

A monster field will head to the 1m 1f start for the Cambridgeshire Handicap at Newmarket at 15:40 and it's the John & Thady Gosden-trained duo of Uncle Bryn and Magical Morning that head the betting, at the time of writing, and both have to be considered leading contenders in what is a devilishly difficult betting conundrum for punters.

Hugely impressive at Ayr last time out, Keith Dalgleish's Chichester has been one of the talking horses this week and is one of the many improvers keeping an eye on, while others at the head of the market worth noting include Astro King and Fantastic Fox.

However, with such a massive field taking their chance then there's sure to be some enhanced each-way prices around with bookmakers, and some could even push to paying out on the first eight places in the each-way market, so it could be worth taking a chance with a big-priced challenger to make the frame.

One that fits that bill is the Andrew Balding-trained BELL ROCK, who was an excellent third in this race 12 months ago, and warmed up for this with a fine second placed finish in the Group 3 Superior Mile at Haydock Park. Returning to the handicap sphere for this event, Bell Rock will have an almighty weight-carrying performance to produce if he is to score, as he lines up off a mark of 108. Third off 103 last year, he will benefit from William Carver taking 3lb off his back, but despite the weight burden he has shown a real liking for this event, and is certainly one of the classiest horses in the race.

Around a 33/1 to 40/1 chance, at the time of writing, Bell Rock is sure to run a big race, and he could be one of those sneaking into those all-important top-eight places, and is worth going with in a hugely exciting contest.