Can Hollie Doyle win Sports Personality of the Year? 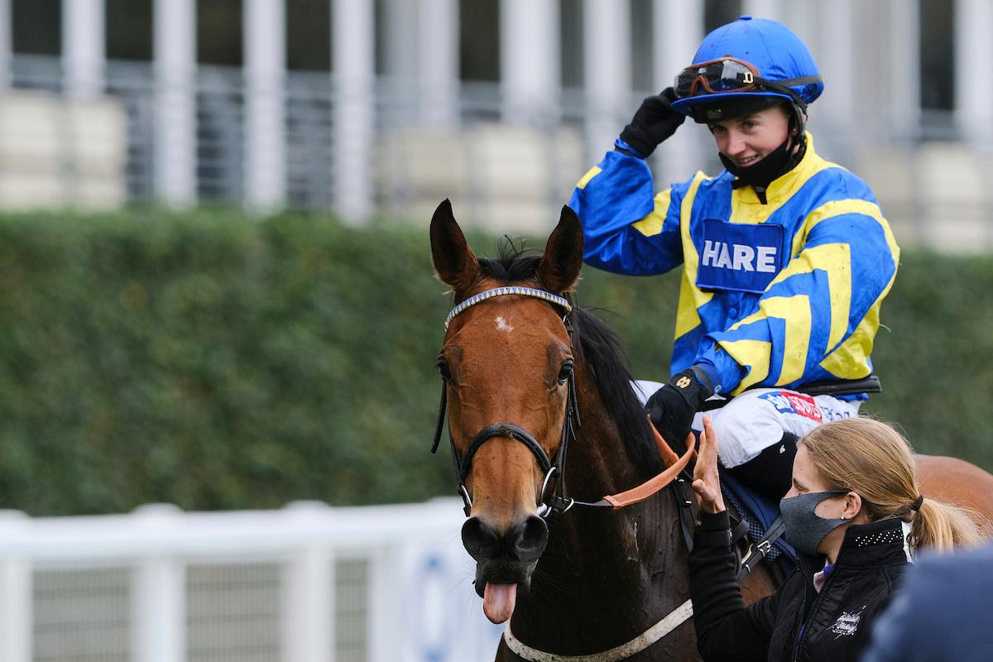 Hollie Doyle rounded off an incredible year with two wins on British Champions Day at Ascot.

After seeing her price slashed following a stellar Saturday at Ascot, Joe Tuffin looks at Hollie Doyle’s chances of winning BBC Sports Personality of the Year…

Whilst most of us have tripped, stumbled and fallen our way through the inconvenient and largely unbearable year that is 2020, Hollie Doyle has thrown herself into the limelight and become the poster woman for a sport which often suffers from a lack of representation in the mainstream media.

A first Group 1 success on Champions Day has seen Doyle shorten into a general price of 25/1 for the coveted award, putting her ahead of the likes of Premier League winner Jordan Henderson, Golf superstar Rory McIlroy and social media sensation Joe Wicks, and she’s the closest that racing has been to the forefront of the prize since 2013 - when A.P. McCoy finished third.

Indeed, racing has long struggled to make an impact with the wider public, and only on four occasions has a jockey managed to finish in the top three places; with Frankie Dettori doing so in 1996 and McCoy earning recognition on three occasions in 2002, 2010 (winner) and 2013. It generally takes something momentous for the nomination, too, with Dettori placing third on the back of his ‘magnificent seven’ at Ascot, and McCoy winning (admittedly in a landslide) after sealing Grand National glory on Don’t Push It in 2010.

Doyle doesn’t have the same profile amongst the wider public as a McCoy or a Dettori just yet, meaning she’s unlikely to win the whole thing, but could she feature in the top three? Potentially.

Her success as a female athlete in a male dominated sport has a very attractive human element to it, and should she make the shortlist her heavily praised humbleness will attract many an unbiased voter - but hopefully her sporting achievements alone will do most of the talking. Indeed, Doyle’s first top level success on Glen Shiel on Saturday came just days after breaking her own record of setting the highest tally of winners by a female rider in a calendar year, something which has firmly established her as a top-class rider in the weighing room, and broken away the gender stereotypes.

Whether or not that is enough for her to crack the top three remains to be seen, though, as there are several huge names in contention. The six-time Formula 1 World Champion Lewis Hamilton would tie the great Michael Schumacher’s record of title wins if succeeding this year and is the current 7/4 joint-favourite with footballer Marcus Rashford, who earned plaudits from around the world with his efforts to tackle child poverty. Meanwhile, mental health advocate Tyson Fury is available at 9/2 after regaining the World Heavyweight Boxing title earlier in the year, while the ever-popular Ronnie O’Sullivan (13/2) is high up on the shortlist after becoming World Snooker Champion for the sixth time this year.

Congratulations to @HollieDoyle1 who breaks the record that she set last year - 117 wins so far this year! 👏 https://t.co/RDrSRnbsT4

It’s incredibly difficult to look past Hamilton and Rashford, but this award regularly sees ‘feel good’ stories perform well - something shown by the para-athlete Jonnie Peacock beating boxer Anthony Joshua to third place as a 66/1 shot in 2017, after sealing gold at the World Para Athletics Championships. The key to success can be resonating with the public, and there is a very real chance she will win the voters over as she has the racing world.

Even if she doesn’t quite crack the prize this year, her achievements mean the sport should be allocated more than the usual 10 seconds of B-roll coverage, which is a victory on its own.

#AD New UK customers (Excluding NI) mobile only. £30 in FREE Bets (FB) as £20 in sports bets & a £10 casino bonus (CB). Min stake £10. Min odds Evs. FB applied on 1st settlement of any qualifying bet. FB 7 day expiry. 1 FB offer per customer, household & IP address only. Payment restrictions. 14 days to accept £10 CB, then active for 3 days. CB 5x wagering & max redeemable £100. Game restrictions apply. Cashed out/Free Bets won’t apply. 30 days to qualify. 18+. T&Cs apply
get offer
Bet £10 get £30 in Free Bets
#AD New customers on mobile only. 7 days to claim and stake £10 minimum bet at odds of 1.5 or greater to qualify. Free, void, cashed out or partially cashed out bets do not qualify. Max 3x £10 free bets credited on bet settlement. Free bets must be used on 4 or more selections with selection odds of 1.3 or greater. Free bets are non-withdrawable, and stake not returned with winnings. 7 day expiry. 18+BeGambleAware.org. T&Cs apply.
Double the odds, any sport, any bet, any odds!
#AD 18+ begambleaware.org Only valid for new registrations to Grosvenor Existing members do not qualify, Bet must be placed using real money in combination with the Odds Boost Token, Offer applies to Sport bets only. Max stake is £10. Each way bets are a maximum of £5 each way (£10 total). Customers have 60 days after registration to use the Odds Boost token. T&Cs apply.
Bet £20 & Get it Back As CASH If It Loses
#AD New customers only. Place your FIRST bet on any Horse Racing market and if it loses we will refund your stake in CASH. Max refund for this offer is £20. Only deposits made using cards will qualify for this promotion. T&Cs apply.
Welcome Offer
#AD Bet £10 & Get £50 in Free Bets for new customers at bet365. Min deposit requirement. Free Bets are paid as Bet Credits and are available for use upon settlement of bets to value of qualifying deposit. Min odds, bet and payment method exclusions apply. Returns exclude Bet Credits stake. Time limits and T&Cs apply. The bonus code SPTS365 can be used during registration, but does not change the offer amount in any way.
Bet £10 Get £30 In Free Bets
#AD 18+. Play Safe. New customers using Promo code R30 only, Min £10/€10 stake,  min odds 1/2, free bets paid as 3 x £10/€10, free bets credited after settlement of first qualifying bet, free bets will expire 30 days after the qualifying bet is placed, payment method/player/country restrictions apply.
Bet £20 & Get it Back As CASH If It Loses
#AD 18+ begambleaware.org Max £20 refund on first bet. Bet must be placed in first 7 days of account opening. Only deposits made via Debit Card will be eligible for the promotion. T&Cs apply.
Bet £10 Get £60 in Bonuses
#AD New UK customers only. Register using the promo code BETFRED60, deposit and place first bet of £10+ on Sports (cumulative Evens+) within 7 days of registration. First bet must be on Sports. £20 in Free Bets to be used on Sports, £10 in Free Bets to be used on Lotto and 50 Free Spins (20p per spin) credited within 48 hours of bet settlement. Further £20 in Free Bets credited 5 days after settlement. Bonuses have a 7-day expiry. Payment restrictions apply. SMS verification and/or Proof of I.D and address may be required. Full T&Cs apply.
Bet £10 Get £30 Free Bets (APP Only)
#AD New UK, IE & Malta customers only. 18+. Min £10/€10 first deposit using Debit Card or Trustly. Place a bet of £10 at min odds of 1.5. Free bets expire in 90 days. Full T&Cs apply.
Bet £10 Get £30 Free Bets + £10 Casino Bonus
#AD Minimum deposit of £10 using deposit code 30F - A qualifying bet is a ‘real money’ stake of at least £10 placed on any sports market - Minimum odds of 1/2 (1.5) - Free bets credited upon qualifying bet settlement and expire after 7 days - Free bet stakes not included in returns - Casino Bonus must be claimed within 7 days • To withdraw bonus/related wins, wager bonus amount x40 within 14 days • Wagering req. vary by game • Withdrawal restrictions and Full T&C’s apply. 18+ begambleaware.org
Bet £10 Get £30 Free Bets
#AD Offer includes a free £1 Race Index spread bet to try out our exciting 50-25-10 race markets. Place a £10 fixed odds bet at minimum odds of 1/2. Get 2 x £10 free fixed odds bets + 2 x £5 free Winning Favourites spread bets. Bet with live streaming on all racing and greyhounds! Ts&Cs Apply. 18+ begambleaware.org
£35 Free Bet + 10 Free Spins
If your account has Sportsbook losses at the end of your first day's betting, QuinnBet will refund 50% of your losses as a Free Bet up to £35 (min 3 bets) Plus 10 Free Spins. Even if your account is up, you're guaranteed a £5 Free Bet Plus 10 Free Spins provided you place at least 1 bet of £10 or greater at the minimum odds. T&Cs apply | 18+ New UK Customers Only | BeGambleAware.org
50% Up To £50 Welcome Bonus
#AD 18+ begambleaware.org; New bettors get 50% of deposit up to £50; Once per household; Min deposit £15 (no Skrill/Neteller); Wager a total of 8 times deposit + bonus, with max qualifying bet stake equal to your initial bonus amount; Bonus expires after 60 days; Min odds of 4/5 on singles, or 2/5 per leg for acca; Some bet types excluded; See full terms.
Latest racing results
Wolverhampton
20:20
Full Result
1stQueen Of Ipanema
2/1JF
2ndObsidian Knight
100/30
3rdDaheer
12/1
Wolverhampton
19:50
Full Result
1stVega Sicilia
5/2
2ndSunstone
6/4F
3rdJack The Savage
40/1
Wolverhampton
19:20
Full Result
1stBase Note
13/8F
2ndKing Of The South
2/1
3rdOutbox
6/1
View All Today's Results