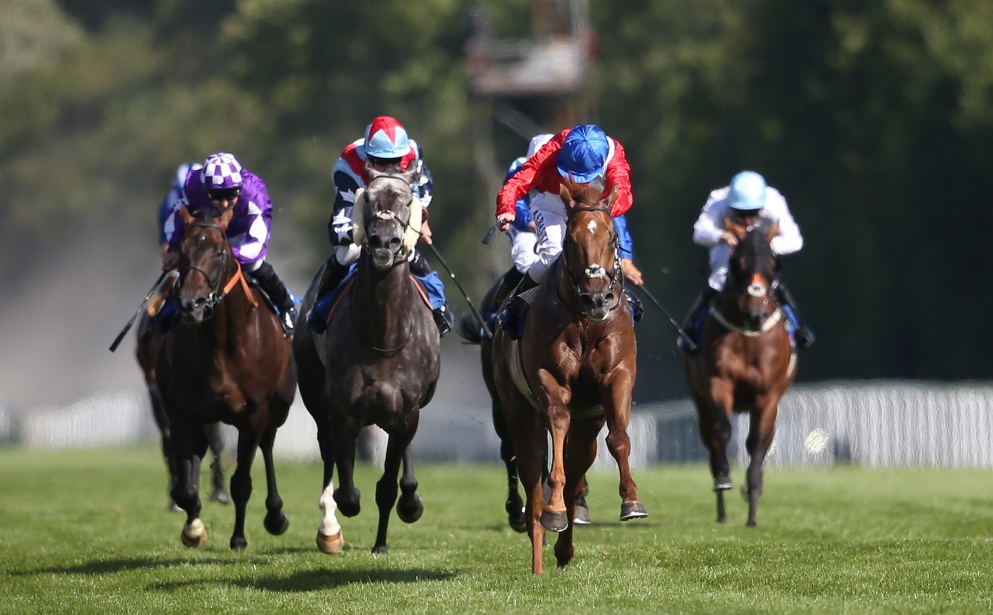 There are 12 possibles for this year's Celebration Mile at the five-day entries stage.

Nick Seddon previews Saturday’s Celebration Mile at Goodwood, which is shaping up into an above-average renewal at the five-day entries stage…

Due to its position in the calendar at the end of August, it’s rare that we see the big hitters of the one-mile division taking their chance in the Celebration Mile, though there’s an eye-catching field of 12 possibles at the five-day stage.

Bearing in mind that we’re yet to have a field that’s bigger than eight this century, it’s unlikely that we’ll see a full compliment, meaning that last year’s winner Duke Of Hazzard is a logical starting point. The four-year-old enjoys his trips here, with three of his five career wins coming in Sussex, and he built on a game success in the Group 3 Thoroughbred Stakes to seal a course and distance double in this last year. He generally needs a strong pace to be seen to best effect, which he should get here, though he’ll need more than when last of eight behind Regal Reality at Salisbury earlier this month in what’s highly likely to be a stronger renewal than 12 months ago, and continued rain would be a worry.

Happy Power was third behind Duke Of Hazzard as a three-year-old last year, and he’s enjoyed another typically busy campaign so far, returning to winning ways in a conditions race at Salisbury earlier this month, though he’s regularly been held at this kind of level, as it’s no surprise to see Regal Reality sitting much shorter in the betting. Regal Reality held his own pretty well in some lofty company last season, and has brought that into this campaign, winning the Group 3 Sovereign Stakes in really good style earlier this month. Like Duke Of Hazzard, he too has won the Thoroughbred Stakes over course and distance, doing so in 2018, though he’s vulnerable now returned to Group 2 company, and others make more appeal at the prices considering he’s the 9/4-joint favourite at the time of writing.

The standout performer on ratings, though, is the current joint favourite Benbatl, who could make his reappearance here for the Saeed bin Suroor team. He's capable of high-class form on his day, as he showed when winning the 2018 Cox Plate at Moonee Valley. His campaign was built around a tilt at the Dubai World Cup last winter, and with that race falling victim to the Coronavirus shutdown, it seems likely that his campaign will once again centre around Dubai.

He showed that he's more than capable of defying a long absence when returning from a 335-day break to win the Group 2 Joel Stakes over this trip last September, and he'd be very difficult to oppose if taking his chance, though persistent rainfall between now and Saturday would be a worry - and it could well convince bin Suroor to once again target a return at Newmarket next month.

Off the track for 335 days, triple Group One winner Benbatl returns in style to bolt up in the Shadwell Joel Stakes at @NewmarketRace under @oismurphy! 👏👏 #Impressive https://t.co/FLrs4BnbJW

Three more who sit prominently in the market at this stage are Sir Busker, Urban Icon and Century Dream. The last-named is a dual winner at Group 3 level over this trip, most recently when winning the rearranged Diomed Stakes at Newmarket in  June. He struggled when fifth at the top level at Chantilly last time, though any softer going would hold no fears. Urban Icon went close off a big weight in a competitive handicap over course and distance last month and can't be ruled out back in Group company, while Sir Busker steps up into this level for the first time. He's a smart handicapper, winning the Silver Royal Hunt Cup at Ascot in June, though he struggled to find a clear run when ninth behind Urban Icon here last month.

Like Urban Icon, Escobar is another who's shown plenty at Goodwood in the past, finishing third in last month's Lennox Stakes and having no luck when travelling all over his rivals in the Golden Mile a year before, but he's arguably shown his best form at seven furlongs. Meanwhile, the three-year-old Positive has shaped well in three starts so far this term, chasing home Regal Reality when third at Salisbury last time, and there could be more to come from him yet, though it is Dark Vision who makes the most appeal at the prices as an each-way prospect.

He's rather difficult to catch right at the best of times, and having looked as though he'd turned over a new leaf so far this season, he promptly disappointed in the Group 3 Strensall Stakes over slightly further at York on Saturday. That just seemed to be an off day for Dark Vision, but he had been enjoying a good time of things prior to that, and hinted that he was ready for a return to Group company when striking in a listed race at Pontefract two starts ago.

The form of that Pontefract run - combined with his effort to win the Royal Hunt Cup at Royal Ascot earlier this summer - would put him right into the mix for this, and bearing in mind that this race could cut up between now and the weekend, it could be worth taking the juicy-looking 12/1 about him now. Indeed, he would likely be much shorter than that if lining up, and bearing in mind that runners from the Mark Johnston yard regularly shrug off poor outings with the minimum of fuss, he looks a nice each-way prospect in a tricky-looking puzzle - with any strong pace an obvious bonus.

Meanwhile, the field is completed by Look Around and Bless Him, both of whom have plenty to do to get serious at this level, and it is Johnston's charge who makes the most appeal at the prices.

#AD 18+ begambleaware.org; New bettors get 100% of deposit up to £50; Once per household; Min deposit £15 (no Skrill/Neteller); Wager a total of 8 times deposit + bonus, with max qualifying bet stake equal to your initial bonus amount; Bonus expires after 60 days; Min odds of 4/5 on singles, or 2/5 per leg for acca; Some bet types excluded; Free spins validity: 7 days; Free spins max. winnings = £100; See full terms; Terms apply.
get offer
Bet £10 Get £30 In Free Bets
#AD 18+. Play Safe. New customers using Promo code H30 only, Min £10/€10 stake,  min odds 1/2, free bets paid as 2 x £15/€15, free bets credited after  settlement of first qualifying bet, free bets will expire 30 days after  the qualifying bet is placed, payment method/player/country restrictions apply.
Bet £10 Get £30 Free Bets (APP Only)
#AD New UK, IE & Malta customers only. 18+. Min £10/€10 first deposit using Debit Card or Trustly. Place a bet of £10 at min odds of 1.5. Free bets expire in 90 days. Full T&Cs apply.
Welcome Offer
#AD Bet £10 & Get £50 in Free Bets for new customers at bet365. Min deposit requirement. Free Bets are paid as Bet Credits and are available for use upon settlement of bets to value of qualifying deposit. Min odds, bet and payment method exclusions apply. Returns exclude Bet Credits stake. Time limits and T&Cs apply. The bonus code SPTS365 can be used during registration, but does not change the offer amount in any way.
Bet £10 Get £60 in Bonuses
#AD New UK customers only. Register using the promo code BETFRED60, deposit and place first bet of £10+ on Sports (cumulative Evens+) within 7 days of registration. First bet must be on Sports. £20 in Free Bets to be used on Sports, £10 in Free Bets to be used on Lotto and 50 Free Spins (20p per spin) credited within 48 hours of bet settlement. Further £20 in Free Bets credited 5 days after settlement. Bonuses have a 7-day expiry. Payment restrictions apply. SMS verification and/or Proof of I.D and address may be required. Full T&Cs apply.
Bet £20 & Get It Back As CASH If It Loses
#AD New customers only. Place your FIRST bet on any Horse Racing market and if it loses we will refund your stake in CASH. Max refund for this offer is £20. Only deposits made using cards will qualify for this promotion. T&Cs apply.
Money Back As Cash Up To £20
#AD Max £20 refund on first bet. Bet must be placed in first 7 days of account opening. Only deposits made via Debit Card will be eligible for the promotion. T&Cs apply. 18+ begambleaware.org
Bet £10 Get £30 Free Bets + £10 Casino Bonus
#AD Minimum deposit of £10 using deposit code 30F - A qualifying bet is a ‘real money’ stake of at least £10 placed on any sports market - Minimum odds of 1/2 (1.5) - Free bets credited upon qualifying bet settlement and expire after 7 days - Free bet stakes not included in returns - Casino Bonus must be claimed within 7 days • To withdraw bonus/related wins, wager bonus amount x40 within 14 days • Wagering req. vary by game • Withdrawal restrictions and Full T&C’s apply. 18+ begambleaware.org
Bet £10 Get £30 Free Bets
#AD Offer includes a free £1 Race Index spread bet to try out our exciting 50-25-10 race markets. Place a £10 fixed odds bet at minimum odds of 1/2. Get 2 x £10 free fixed odds bets + 2 x £5 free Winning Favourites spread bets. Bet with live streaming on all racing and greyhounds! Ts&Cs Apply. 18+ begambleaware.org
Bet £10 Get £10 + £10 Casino Bonus
#AD New UK customers (Excluding NI) mobile only. £20 in FREE Bets (FB) as £10 in sports bets & a £10 casino bonus (CB). Min stake £10. Min odds Evs. FB applied on 1st settlement of any qualifying bet. FB 7 day expiry. 1 FB offer per customer, household & IP address only. Payment restrictions. 14 days to accept £10 CB, then active for 3 days. CB 5x wagering & max redeemable £100. Game restrictions apply. Cashed out/Free Bets won’t apply. 30 days to qualify. 18+.  T&Cs apply
£25 Free Bet + 10 Free Spins
If your account has Sportsbook losses at the end of your first day's betting, QuinnBet will refund 50% of your losses as a Free Bet up to £25 (min 3 bets) Plus 10 Free Spins on Asgard Warriors. Even if your account is up, you're guaranteed a £5 Free Bet Plus 10 Free Spins provided you place at least 1 bet of £10 or greater at the minimum odds. T&Cs apply | 18+ New UK Customers Only | BeGambleAware.org
Latest racing results
Warwick
13:40
Full Result
1stLe Cameleon
100/30
2ndNorthern Bound
7/4F
3rdFat Sam
7/2
Ayr
13:15
Full Result
1stHilts
9/2
2ndEbony Maw
9/1
3rdRoyal Regent
6/1
Warwick
13:05
Full Result
1stSir Tivo
4/11F
2ndDecorated
3/1
3rdDance At Night
18/1
View All Today's Results