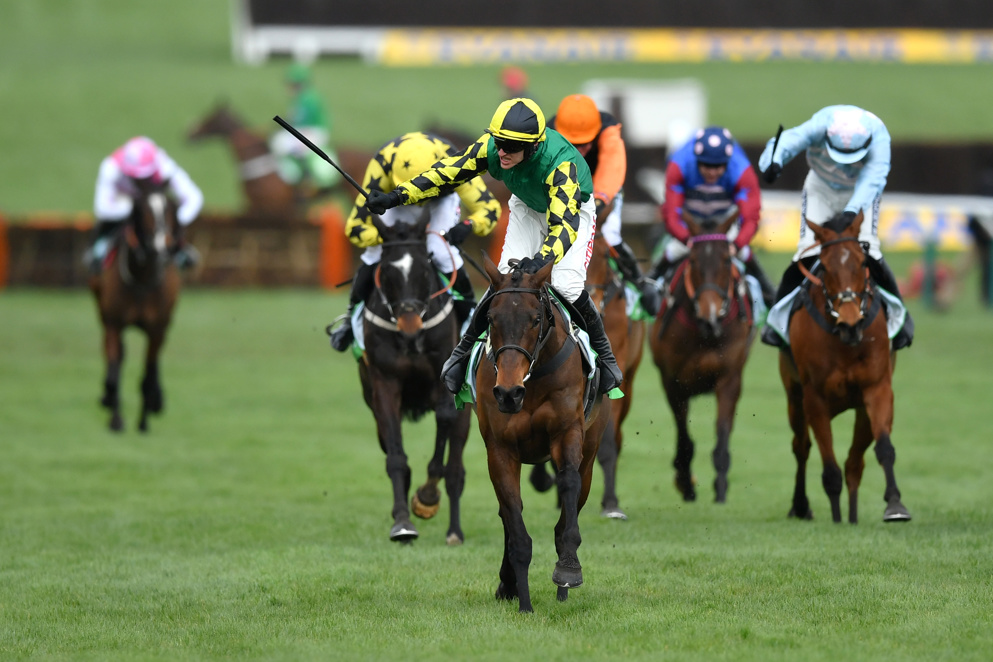 Stayers' Hurdle winner Lisnagar Oscar will line up in the West Yorkshire Hurdle.

We preview Saturday's action at Wetherby, where there could be some vital Cheltenham Festival clues coming from races like the Charlie Hall Chase and West Yorkshire Hurdle...

National Hunt stars will emerge from their summer slumber over the next few weeks, and one of the early season highlights takes centre stage on Saturday afternoon, as Wetherby races holds a mouth-watering seven-race card, where there are some quality Graded races alongside some competitive-looking handicaps - and an eye-catching novice hurdle to boot.

We pick out some of the races to watch out for, and point out some potential Cheltenham Festival clues that could emerge from the Yorkshire venue.

Nicky Henderson has saddled the winner of this race twice since its inception in 2007 (My Petra - 2008, Une Artiste - 2012) and the Seven Barrows handler will fancy his chances of landing a third win on Saturday as he unleashes the ultra-smart mare, Verdana Blue. A Grade 1-winning hurdler (won 2018 Christmas Hurdle), Verdana Blue has been switching between the National Hunt sphere and Flat over the last few years, and she sparkled in the summer, finishing second in the Ascot Stakes at Royal Ascot.

However, her return to the hurdling game didn't go quite to plan at Kempton Park two weeks ago, as sent off an odds-on favourite she could only finish second to Silver Streak in a Listed event. Now, Henderson will hope to hand her a confidence booster by pitting her against her own sex in the bet365 Mares' Hurdle at 14:10, and she is likely to be sent off at prohibitive odds once again. With the Champion Hurdle still likely to be in Henderson's plans with his eight-year-old mare, she has to win this contest comfortably if she is to be a factor in the Champion Hurdle. She finished a fine fifth in the 2018 Champion Hurdle, so has shown she can cut it at the very top.

Whitehotchillifili will prove to be a notable rival on Saturday, and the Harry Fry-trained raider, who finished sixth in the Mares' Novices' Hurdle at the Cheltenham Festival, will be hoping to put pressure on Verdana Blue, but she could well lack the experience against a classy Seven Barrows in-mate, who should return to winning ways with aplomb.

A shock 50/1 winner of the Stayers' Hurdle at the Cheltenham Festival, Lisnagar Oscar is set to make his hotly-anticipated return to the track in Wetherby's West Yorkshire Hurdle at 14:45, as he looks to show that Grade 1 success wasn't a flash in the pan. Currently a relatively unfancied 16/1 for the 2021 Stayers' Hurdle, the Rebecca Curtis-trained seven-year-old will head into Saturday's contest at the top of the betting and if he can taste victory then will most certainly be clipped in the Stayers' Hurdle betting, but lacking consistency for most of his career the gelding could be best watched in what is an intriguing contest.

Next Destination was a Grade 1-winning novice hurdler for Willie Mullins, but hasn't been seen for over 900 days, and will line up under the stewardship of Paul Nicholls. Available at 33/1 for the Stayers' Hurdle, Next Destination will look to get his career back on track, but after such a long absence he may need the run. Roksana and Wholestone are two solid yardsticks in the staying hurdling division, and will capitalise should some of the prominent figures in the betting falter, while Colin Tizzard's Copperhead will use the race as a prep run for the Ladbrokes Trophy, but he is a classy horse and adds more intrigue to a sparkling renewal of the Grade 2 event.

Regarded as the first Cheltenham Gold Cup trial on British soil at the start of the Jumps season, the Charlie Hall Chase often throws up a very smart winner, who goes on to be competitive in the blue riband event at the Cheltenham Festival, and this year's renewal could be no different. The Paul Nicholls-trained Cyrname will lock horns with the Kim Bailey-trained Vinndication in the three-mile Grade 2, while the trio of Sam Spinner, Definitly Red and reigning champion Ballyoptic add significant depth to the race.

Cyrname rocketed into the limelight with some electric performances at Ascot, and his defeat of Altior in the Ascot Chase in February 2019 was a career best, and the world was at his hooves. However, since that victory he's failed to taste success as he was thrashed 21 lengths by Clan Des Obeaux in the King George VI Chase and was then a faller in the 2020 Ascot Chase. A dominant figure at right-handed tracks, Cyrname is yet to show his class at a left-handed course, and the jury remains out as to whether he can excel over three miles, so Saturday's test will answer some questions for the Ditcheat star.

Vinndication relished the step up to three miles when winning the Sodexo Gold Cup at Ascot last season, and he ran a mighty race off top weight when fourth in the Ultima Handicap Chase at the Cheltenham Festival. Currently a 50/1 shot for the Cheltenham Gold Cup, Vinndication will look to test his class at the top table of staying chasing this year, so if he can run well on Saturday then he could venture into the Gold Cup picture.

A gutsy winner of this race 12 months ago, Ballyoptic will look to become the first horse since See More Business in 2000 to win back-to-back renewals, and while he maybe more of a Grand National horse than a Gold Cup contender, he is a class act on his day and can't be discounted, as are Definitly Red and Sam Spinner. The latter makes more appeal of that duo as he was a really smart staying hurdler and showed he could be a classy chaser in the making when racking up three novice chase wins on the bounce. Injury curtailed his season, but Jedd O'Keeffe's star will return looking to the track to try an maintain his 100% record over fences and show he can fight it out on the big stage for the 2020/21 campaign.