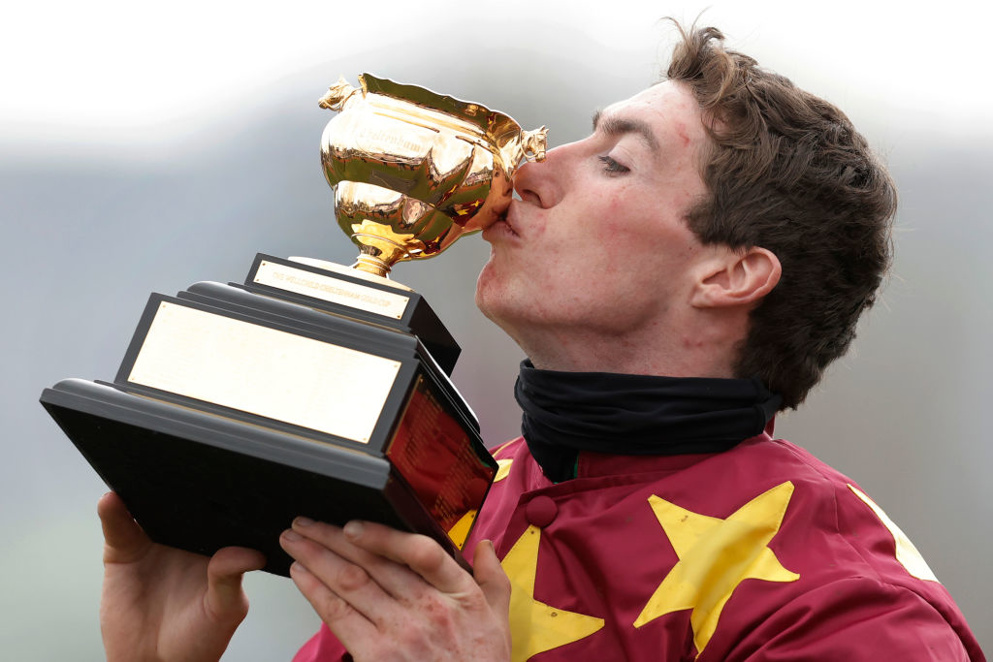 The Grand National may be the most watched horse race in the world, but for racing fans the Cheltenham Gold Cup is the biggest race every year. The 2023 renewal promises to be no exception and as the first stage of entries takes place it is still Willie Mullins' Galopin Des Champs heading the market, with 27 still in with a shout...

Barring a cruel last fence blunder Galopin Des Champs would've cruised to Turners glory at Prestbury Park in 2022. His tumble seems to have taken little away from him, however, as he came out and bolted up at Fairyhouse to make amends before a summer break and a stunning return at Punchestown in December. He is undoubtedly the most exciting chaser in training right now and lead the market for Gold Cup glory, but will certainly face plenty of willing foes.

In behind him in the market comes a batch of horses at around the 10/1 mark. Firstly, L'Homme Presse, last season's three mile Novice race winner from the Festival. Venetia Williams' charge proved his class that day and has shown he has kicked on once more this season with a brilliant weight defying win at Newcastle before falling when in contention, but probably beaten, in the King George. The horse who won that race at Kempton, Bravemansgame, is another in this price bracket and will be coming straight for this race for Team Ditcheat. Of the two the superior Cheltenham form of L'Homme Presse would make him our preference, and the lack of stamina concerns.

Some Irish contenders are in and around the same prices as the aforementioned British duo. Firstly, last season's stunning winner of the Gold Cup A Plus Tard for Henry De Bromhead. It's many a year since a Gold Cup was won with such authority and if those on course that day would've been told by January 2023 he would be double figures to defend his crown they'd have laughed. However, that is what has happened after a seriously poor reappearance at Haydock as he attempted to defend his Betfair Chase crown. He will need to bounce back but if back in last season's form looks overpriced. The 2022 Grand National hero Noble Yeats has emerged as a credible Gold Cup contender and is similarly priced to last season's winner with most firms. The speed he showed in the Many Clouds Chase when cruising away to a 3+ length win at Aintree marked him out as no slouch and he deserves to be taken seriously in racing's biggest race.

The next Irish contender in at a best price of 12/1 is Conflated for Gordon Elliott and Gigginstown. A horse some really rate and some can't warm to, his credentials are undeniable after cruising to Savills Chase victory last time out. He may just be a few pounds better at Leopardstown than anywhere else, but if he chooses to come to the Gold Cup not the Ryanair he is one not to discount lightly for a team who know how to win this race. Protektorat for the Skeltons is another priced at double figure odds, but only just, to win the Gold Cup. In the aforementioned Betfair Chase in which A Plus Tard disappointed, Protektorat excelled and put in a career best. Another year stronger and wiser, he could be the best of the Brits.

Finally of this group in and around the same price as each other comes Stattler, who has been supported after only narrowly going down to 2021 Gold Cup winner Minella Indo (20/1 to win the race again in 2023) despite giving him eight pounds. This was a smashing open company debut from Stattler, and impressive winner of last year's National Hunt Chase, and he will surely improve bundles before Cheltenham. It could be the case Willie Mullins possesses both the favourite and his biggest threat come race day!

Two time Ryanair champion Allaho was taken out of the Gold Cup at this stage, but one horse who wasn't is Shishkin. Nicky Henderson has intimated the former 2 mile star needs a serious step up in trip to now be seen at his best and he would be a fascinating runner. With all the question marks over him though surely punters will steer clear. Monkfish has been missing since going down narrowly to Colreevy in mid 2021, and prior to that defeat and his long lay off the 2021 Brown Advisory winner was a strong favourite to win the next year's Gold Cup. The noises out of Closutton haven't been great about him making it back on track this campaign, but with him still being in then clearly he has a chance and if turning up in peak form on the day, a tough task after such a long absence, would be nowhere near his antepost price.

Full List Of Entered Horses In The Gold Cup: