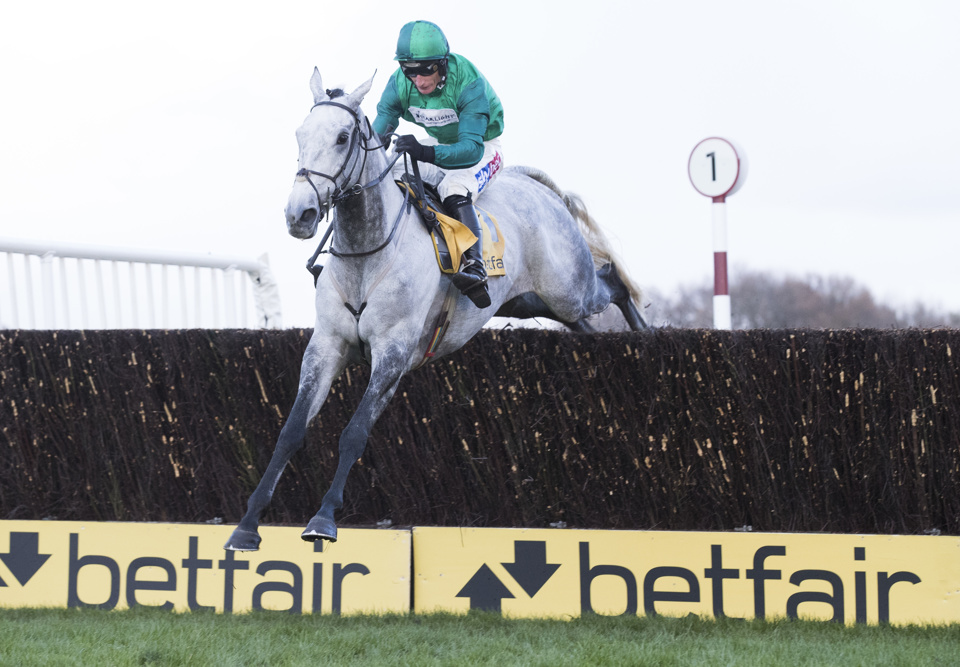 Bristol De Mai was due to carry 11-08 in this year's Grand National at Aintree.

Daryl Jacob has revealed that he was disappointed to have missed out on the chance to ride Bristol De Mai in this year's Grand National, as he feels he would have been well-suited to the unique demands of the Aintree race...

The nine-year-old has established himself as a top-class chaser over the past few seasons, producing stellar efforts to win back-to-back renewals of the Betfair Chase at Haydock in 2017 and 2018, and he was due to have his first crack at the Grand National this year - having contested the Aintree Bowl at the meeting for each of the past three seasons.

And his regular partner Daryl Jacob, who won the Aintree spectacular on Neptune Collonges in 2012, revealed that he was disappointed not to get the chance to ride Bristol De Mai this year, as he feels that he would have been tailor-made for the marathon test on Merseyside.

He said: "I was really looking forward to riding Bristol in it this year. I thought he had a great chance on a flat track going left-handed, the ground would have been perfect for him over that sort of distance, and it would have been really interesting to see how he would have got on."

Bristol De Mai would have been tasked with carrying a whopping 11-08 in this year's race should the top weight Tiger Roll have taken his chance, though Jacob feels that the changing nature of the Grand National means that big weight-carrying performances are becoming more plausible; “Neptune Collonges was the first horse to carry 11-06 for the first time in God knows how long," he said.

"They always said the ideal weight is 10-13 to 11-03 (for a Grand National winner), but you need a classy horse to win this race now. Every year the handicap for these horses seems to be getting higher and higher - at one stage you could get a horse in off 120 into the Grand National, but that’s not the case now. You need a 140-145 horse just to get in off 10-stone, so good horses are there and it’s a wonderful spectacle."

Jacob added that he was pleased with Bristol De Mai's campaign, having teamed up for fine efforts in defeat to finish second behind two top-class rivals in both the Betfair Chase at Haydock, and the Cotswold Chase at Cheltenham.

He said: “He’s a fantastic horse, he’s always very well, and is very good when he’s very fresh. It's been well-documented that he’s not the easiest horse to train in the world, but when you can get him right he’s a very good horse.

"It was widely reported coming into the Betfair Chase this year that he wasn’t 100%, he had a few training problems coming into that, but he ran a fantastic race - just getting a little bit tired after the last against Lostintranslation. He then ran a mighty race in the Cotswold Chase against Santini, giving him three or four pounds.

"I think the ground was just drying up a little too much (in the Gold Cup), and it felt like quick ground for him and he ended up making the running. I think in a race like that he’s better if we can get a lead on him, on softer ground would help him really."

Bristol De Mai has long been regarded as something of a Haydock specialist thanks to some spectacular performances at the Merseyside course, though Jacob feels that such a tag is unfair based on what he's achieved elsewhere; “He finished second in the JLT, third in the Gold Cup, second in the Cotswold, he’s been to Chepstow and won the Grade 1 Finale at Chepstow, so he’s versatile," he said.

"It’s just in that race at that time of the year around Haydock suit him perfectly, because he’s generally very fresh, the ground is softer up there at that time of year and it takes a very good horse to beat him on very soft ground."

Meanwhile, Jacob revealed that he was delighted to ride a winner for his retained owners Simon Munir and Isaac Souede after a stop-start campaign thanks to injury - striking with Concertista in the Mares' Novices' Hurdle.

He said: “It was magic, and something I needed for my CV for Simon and Isaac. They’ve been wonderful supporters of me for the last five years, and riding a Cheltenham Festival winner for them was something that was missing on the CV, so to get that was very, very special."