Dettori positive about Enable ahead of September Stakes 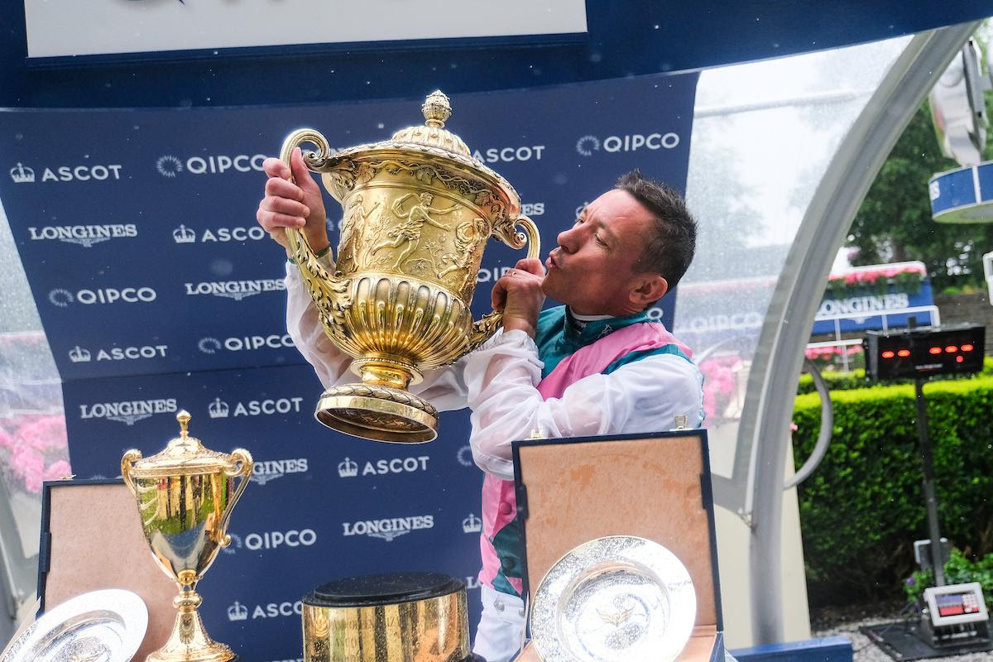 Frankie Dettori has provided a positive update on Enable, as she ramps up her Arc prep with a run in Saturday’s Group 3 September Stakes at Kempton.

The six-year-old has been kept in training with the sole objective of sealing an historic third win in next month’s Prix de l’Arc de Triomphe at Longchamp.

But she’s already been productive so far this season, becoming the first three-time winner of the King George VI and Queen Elizabeth Stakes at Ascot in July.

Enable is due to have her final prep run for Paris in this weekend's September Stakes at Kempton, which she won on route to winning the Arc in 2018, and she’s a long odds-on favourite to win this for a second time.

However, her jockey Frankie Dettori stressed that while a good run was important, the main objective is readying her for next month’s assignment in the Arc.

The latest on Enable before her likely final start in Britain?

He told Racing TV: “I rode Stradivarius and Enable on Wednesday and both are in really good fettle, and just did a solo routine gallop. She feels up for it and if everything goes well, in four weeks on Sunday we’re going to have a crack at the Arc.

“In the mornings she seems focused, and just to get her in the horse box and to go racing gets her much closer to being as good as she can for Paris."

Meanwhile, he added that her final two runs would be tinged with sadness, as the ongoing restrictions around the Coronavirus pandemic will mean that the mare will bow out from the racecourse without a capacity crowd to see her;

“It’s very sad that she’s going to leave England for possibly her last race in front of nobody, but it will be well televised, and it’ll be easier for me as I’ll be less emotional!

“It’s sad that the people aren’t there to appreciate her on her last race in the UK, and the same thing goes for Paris. We’re still going to have 5000 people so it’s not bad, but my concern is to do the best we can.

“The farewell is out of my hands, and at the moment the whole Clarehaven team are just trying to get her there in the best shape that we can - to make sure that win, lose or draw, we’re going to leave everything in the Arc.”

#AD 18+ begambleaware.org; New bettors get 100% of deposit up to £50; Once per household; Min deposit £15 (no Skrill/Neteller); Wager a total of 8 times deposit + bonus, with max qualifying bet stake equal to your initial bonus amount; Bonus expires after 60 days; Min odds of 4/5 on singles, or 2/5 per leg for acca; Some bet types excluded; Free spins validity: 7 days; Free spins max. winnings = £100; See full terms; Terms apply.
get offer
Bet £10 Get £30 In Free Bets
#AD 18+. Play Safe. New customers using Promo code H30 only, Min £10/€10 stake,  min odds 1/2, free bets paid as 2 x £15/€15, free bets credited after  settlement of first qualifying bet, free bets will expire 30 days after  the qualifying bet is placed, payment method/player/country restrictions apply.
Bet £10 Get £30 Free Bets (APP Only)
#AD New UK, IE & Malta customers only. 18+. Min £10/€10 first deposit using Debit Card or Trustly. Place a bet of £10 at min odds of 1.5. Free bets expire in 90 days. Full T&Cs apply.
Welcome Offer
#AD Bet £10 & Get £50 in Free Bets for new customers at bet365. Min deposit requirement. Free Bets are paid as Bet Credits and are available for use upon settlement of bets to value of qualifying deposit. Min odds, bet and payment method exclusions apply. Returns exclude Bet Credits stake. Time limits and T&Cs apply. The bonus code SPTS365 can be used during registration, but does not change the offer amount in any way.
Bet £10 Get £60 in Bonuses
#AD New UK customers only. Register using the promo code BETFRED60, deposit and place first bet of £10+ on Sports (cumulative Evens+) within 7 days of registration. First bet must be on Sports. £20 in Free Bets to be used on Sports, £10 in Free Bets to be used on Lotto and 50 Free Spins (20p per spin) credited within 48 hours of bet settlement. Further £20 in Free Bets credited 5 days after settlement. Bonuses have a 7-day expiry. Payment restrictions apply. SMS verification and/or Proof of I.D and address may be required. Full T&Cs apply.
Bet £20 & Get It Back As CASH If It Loses
#AD New customers only. Place your FIRST bet on any Horse Racing market and if it loses we will refund your stake in CASH. Max refund for this offer is £20. Only deposits made using cards will qualify for this promotion. T&Cs apply.
Money Back As Cash Up To £20
#AD Max £20 refund on first bet. Bet must be placed in first 7 days of account opening. Only deposits made via Debit Card will be eligible for the promotion. T&Cs apply. 18+ begambleaware.org
Bet £10 Get £30 Free Bets + £10 Casino Bonus
#AD Minimum deposit of £10 using deposit code 30F - A qualifying bet is a ‘real money’ stake of at least £10 placed on any sports market - Minimum odds of 1/2 (1.5) - Free bets credited upon qualifying bet settlement and expire after 7 days - Free bet stakes not included in returns - Casino Bonus must be claimed within 7 days • To withdraw bonus/related wins, wager bonus amount x40 within 14 days • Wagering req. vary by game • Withdrawal restrictions and Full T&C’s apply. 18+ begambleaware.org
Bet £10 Get £30 Free Bets
#AD Offer includes a free £1 Race Index spread bet to try out our exciting 50-25-10 race markets. Place a £10 fixed odds bet at minimum odds of 1/2. Get 2 x £10 free fixed odds bets + 2 x £5 free Winning Favourites spread bets. Bet with live streaming on all racing and greyhounds! Ts&Cs Apply. 18+ begambleaware.org
Bet £10 Get £10 + £10 Casino Bonus
#AD New UK customers (Excluding NI) mobile only. £20 in FREE Bets (FB) as £10 in sports bets & a £10 casino bonus (CB). Min stake £10. Min odds Evs. FB applied on 1st settlement of any qualifying bet. FB 7 day expiry. 1 FB offer per customer, household & IP address only. Payment restrictions. 14 days to accept £10 CB, then active for 3 days. CB 5x wagering & max redeemable £100. Game restrictions apply. Cashed out/Free Bets won’t apply. 30 days to qualify. 18+.  T&Cs apply
£25 Free Bet + 10 Free Spins
If your account has Sportsbook losses at the end of your first day's betting, QuinnBet will refund 50% of your losses as a Free Bet up to £25 (min 3 bets) Plus 10 Free Spins on Asgard Warriors. Even if your account is up, you're guaranteed a £5 Free Bet Plus 10 Free Spins provided you place at least 1 bet of £10 or greater at the minimum odds. T&Cs apply | 18+ New UK Customers Only | BeGambleAware.org
Latest racing results
Worcester
14:06
Full Result
1stFortunes Melody
11/8F
2ndVoice Of Calm
11/4
3rdFairfield Ferrata
16/1
Thurles
14:00
Full Result
1stFoniska
5/2F
3rdDrummin Life
9/2
4thSkyquake
11/1
Ayr
13:50
Full Result
1stBoy Douglas
13/2
2ndRadetsky Marsch
6/4F
3rdEastvan
100/30
View All Today's Results