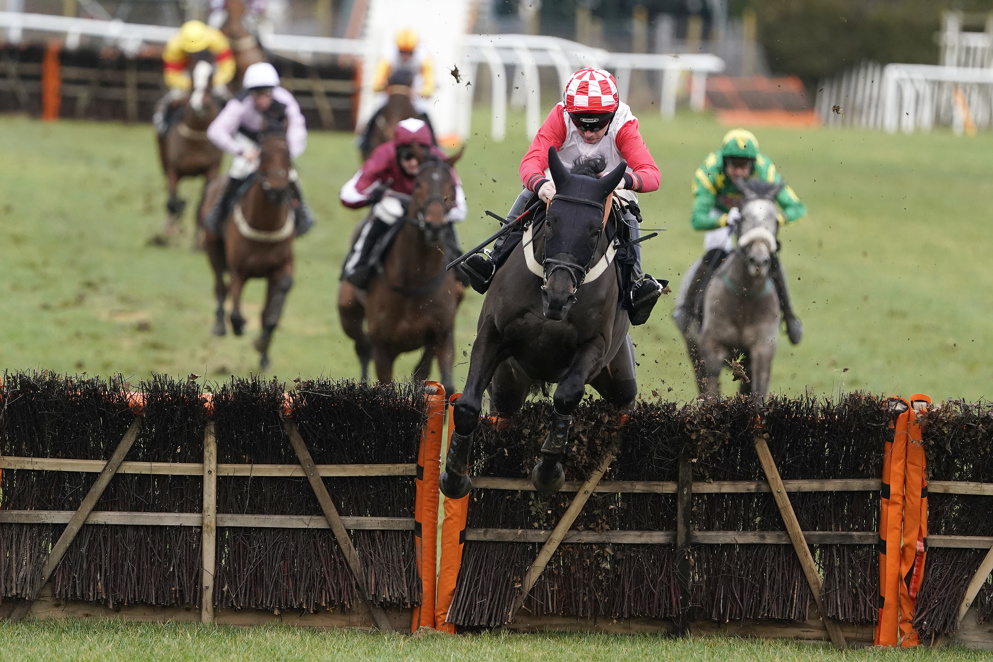 Highway One O Two has won each of his last two starts at Plumpton in emphatic fashion.

Alex Stearn previews Saturday’s Grade 2 Dovecote Novices’ Hurdle at Kempton, and picks out his best bet in the race…

The Dovecote Novices’ Hurdle is one of three graded races over timber at Kempton on Saturday, and this year’s renewal promises to be a good race given the betting currently reads around 3/1 the field. Nicky Henderson is the winning-most trainer in this contest with eight wins, and with none of his runners currently jocked up, it will be interesting to see which of his three-pronged attack on the race turns out to be his first string.

It’s one from Seven Barrows who heads the market at the time of writing, too, in the form of the Flat recruit Buzz. A solid performer on the level for Hughie Morrison, he’s impressed in his two starts over timber since joining Henderson, winning on both occasions. His first start came at Taunton, when admittedly his jumping wasn’t as slick as it have could been, but his Flat experience came to the fore as he rallied to get up close home. Again, his experience from the level stood him in good stead on his next start, after low-sun meant that the last four hurdles at Doncaster were omitted – running out a snug winner for connections. This son of Motivator has the potential to achieve plenty more over timber yet, and he would be a leading a player if taking his chance.

Two from two over hurdles! Smart Flat performer Buzz gets the better of Glory And Fortune and wins for @JerrymcGrath, @sevenbarrows and @ThurloeThbreds at @DoncasterRaces... https://t.co/dL4uj3keoq

Stablemate Son Of Camas brings Grade 1 form to the contest having finished third in a testing renewal of the Tolworth Hurdle at the start of the year. He seemed to hate every yard of the bottomless ground at Sandown, and he should prefer it at Kempton provided the rain stays away. He won what looked a strong contest on his only start over hurdles at Newbury prior to that back in November, with each of the second and the third-placed horses plus a final flight faller all winning since. He is probably the form pick of the entries coming into this as a consequence, and if he gets better ground, he is another with obvious claims.

The Henderson attack is completed by Nanabelle, who carries the famous double green colours of Simon Munir and Isaac Souede on what will be her start since crossing the Channel. She is another that boasts an unbeaten record from her two starts to date, and the BHA haven’t taken any chances with her opening mark - interpreting her French form as strong and giving her an official rating of 137. Her age and sex allowance in this contest means she’d have a feather-weight of 10-03 on her back, but she does also hold an entry in the Adonis earlier on the card - so she could well stick to her own age-group.

West Cork is another with claims for the formidable Skelton team, and he will bid to make a successful step up to graded company after two wins in minor company at this trip. His hurdling career started over further, placing over two and a half miles at Wetherby and Warwick respectively, but he’s been dropped back to the minimum distance since. Both of his two most recent outings have come at Huntingdon, and the form of his latest start looks very strong, considering he put seven lengths between himself and the highly-regarded Mister Coffey. However, it’s worth noting that his rival rather noticeably over-raced that day, meaning the form needs to be taken with a pinch of salt.

Chris Gordon has a small string compared to most of the names mentioned above, but his representative Highway One O Two is a horse of real potential. He had decent bumper form to his name in the early part of this season, but it’s since switching to hurdles that he’s really come into his own, and he’s yet to come off the bridle in recording back-to-back successes at Plumpton. Admittedly, novice races at Plumpton don’t normally produce Grade 2-winning performers, but the nature of his two wins were emphatic and he is worthy of his place at this level after giving 7 lb and an 11-length beating to the field last time out.

Smashing performance – Highway One O Two once again toys with the opposition, winning in bloodless fashion under Leighton Aspell for @chrisgordon68 at @plumptonraces… https://t.co/wgQrBsss5U

Of the rest, Benson and Kid Commando are of similar ilk to Highway One O Two but may just lack that experience having only had the one start over obstacles to date. The former looked like he was about to throw down a firm challenge in the listed Contenders Hurdle at Sandown earlier this month, before slamming on the brakes and refusing to jump the second last, and rates as a risky proposition for his supporters. Enemy Coast Ahead is another that showed promise at Newbury on hurdling debut, but would need to build on that substantially to get involved.

With the strength of form relatively hard to gauge and only one of the 15-strong field having been tried at this level so far, it may not be a vintage renewal in terms of quality but it does have the potential to unearth a gem. The potential that Highway One O Two has shown to date is very appealing, and although this represents a big step up in class, there could be plenty more to come from him yet after two emphatic wins at Plumpton. Tom Cannon keeps the ride and the increased opportunity he has had this year has seen his name thrust into the limelight thanks to the likes of Edwardstone and Hogan’s Height, and he can add this Grade 2 to his CV for the Chris Gordon team. The pecking order of Nicky Henderson’s runners are yet to be decided, but all three are worthy of consideration while lining up, while the clearly talented Benson is not to be completely dismissed either if his quirks can be kept in check.