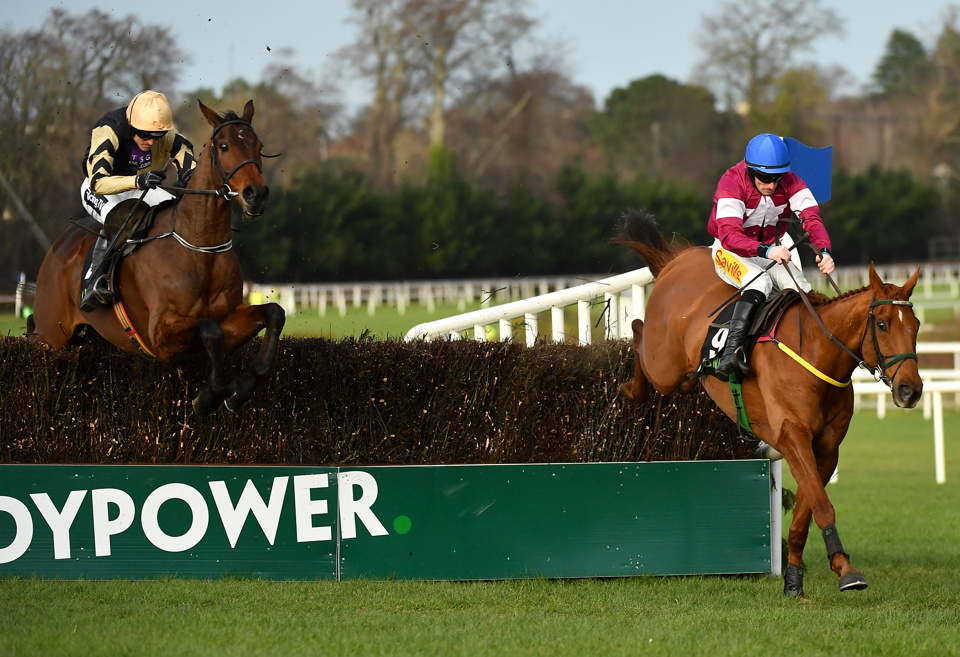 Road To Respect is bidding to retain his crown in the Down Royal Champion Chase.

Karl Hedley previews this weekend's action at Down Royal, which is headlined by the Grade 1 Champion Chase...

Couer Sublime won a three-year-old hurdle at this meeting last year, which proved to be his only success of the season, and his return to the track may bring about a welcome change of luck. He showed plenty of ability last term, however, and his best effort arguably came in defeat, when going down by a little over three lengths to Pentland Hills, who mowed him down entering the closing stages of Triumph Hurdle at Cheltenham earlier in the year. Horses that finished in behind him in that race and that have subsequently come out to boost the form include Quel Destin, Gardens of Babylon and Ecco. Davy Russell has chosen him over stablemate Coko Beach, and that could well be what swings this race very much in his favour.

Connections of Triplicate will be doing a rain dance to ensure optimum conditions for this six-year-old son of Galileo. He was a solid type on the Flat, winning two small middle distance races for Aiden O’Brien at Killarney and Galway. He then switched stables to Aidan's son Joseph, and he has gone on to win two races over hurdles, including when breaking his maiden at the Galway Festival last year and again at Listowel next time. Whether it be by design or default he is used to small fields, and that may well be a key asset here despite having to give at least 4 lb to all of his rivals.

Coko Beach has never won at this trip, with his sole victory coming over two and a half furlongs further, but if it becomes a stamina test he may well deploy front-running tactics and could prove dangerous. If allowed a loose lead he may be hard to peg back and that could see all struggle against him. Despite two recent wins and being fully race fit, Western Victory had her limitations exposed on bad ground at Limerick a couple of weeks ago, and with others likely to prove better than the opposition she faced that day, she may well struggle again.

Road To Respect has won on his seasonal debut for the last two seasons, including when landing this race in emphatic style last year. He was far from disgraced when finishing third to subsequent Cheltenham Gold Cup winner Kemboy in the Savills Chase at Leopardstown next time, and was then just touched off by the rejuvenated Bellshill at the same track a few weeks later in the Irish Gold Cup - in what turned out to be only a four-runner affair. Noel Meade then subsequently opted to run him in the Ryanair Chase over a trip shorter than ideal at the Cheltenham Festival, but he still ran a respectable third to Frodon over only two and a half miles. That effort clearly took its toll, too, as he trailed in fifth of six at Aintree on his final start of the campaign. A year older is a year wiser, however, and considering his record when fresh, he is taken to see off his challengers.

Delta Work showed that he would be a force to be reckoned with this year as he romped to victory in the Champion Novice Chase over this trip at Punchestown earlier in the spring. Gordon Elliott loves to train winners up here in the North, but my only doubt about him are down to the likely state of the ground. It will likely prove softer than he ideally wants, and that might just put pay to his chances after a 186-day layoff.

Paul Nicholls has won this race four times in the past, with Kauto Star twice, Kauto Stone and of course Taranis, and it is notable that he is sending over Clan Des Obeaux for his seasonal reappearance. There is just a slight cloud over the stable runners needing their first run of the campaign, though, particularly when you consider that Clan Des Obeaux improved leaps and bounds after his pipe opener last season to win the King George VI Chase at Kempton, before following up in the Denman Chase at Ascot - but he would have the class to have a serious say in this if fully tuned up.

Alpha Des Obeaux and Balko Des Flos look up against it here, whilst a decent run could be on the cards from Snow Falcon, who represents local owner Patricia Hunt. He showed he was in rude health when defeating the consistent Peregrine Run on his seasonal return at Gowran Park last month, and if any of the major players fail to run their race, he will be there to pick up the pieces.

Gordon Elliott had Delta Work lined up for this race at the five-day stage, but now that he heads to the main race of the day he can still win this Grade 2 event with his likeable seven year old deputy, Hardline. He should have finished an awful lot closer than the six and a half lengths he was beaten when second in a Grade A Handicap at Punchestown last spring, where he bumped into an impressive winner in the form of Real Steel. He was badly hampered at a crucial stage in the race that day, though, and got going far too late in order to try and catch the eventual winner. With a summer break under him he should be ready to do himself justice first time out, and he could well turn the tables on the Willie Mullins raider.

Real Steel is as tough as they come, though, and is rated 6 lb better than the selection on official ratings. He might just prove a little ring rusty though, and it is worth bearing in mind that he fell on his seasonal reappearance last season. Whilst stamina is his forte, he will need to be at the top of his game to see off the Gordon Elliott brigade. Meanwhile, Paul Nicholls has entered Secret Investor at the time of writing. He was pulled because of bad ground at Cheltenham last week and may not run here either, which would be disappointing. He is clearly improving at a rate of knots, but again there are doubts about the yard's runners first time out and he cannot be considered on that basis.

Ben Dundee started off his campaign here last year, and he was unlucky to be collared in the closing stages of a beginners' chase, finishing third. He has a bit more experience behind him now, though and it would be foolish to discount him completely.