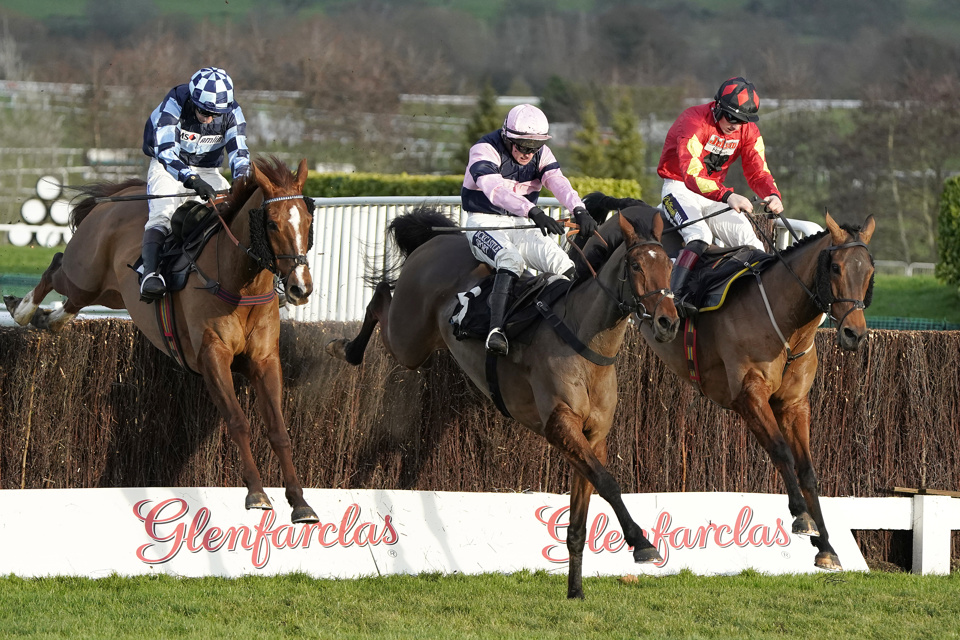 Cogry refused to be beaten at Cheltenham

Goshen had already wowed us with a 34-length victory at Sandown last week - which earned him ante-post favouritism for the Triumph Hurdle -  and now Botox Has is another to keep an eye on for Gary Moore, giving us two horses that we need to consider come March.

A well supported 11/8-on favourite, Botox Has showed definite signs of ability despite clear hints of inexperience. He attacked all of the obstacles, putting in a huge leap at the last, before drifting across the track on the run-in and eventually running out an impressive five-length winner - earning him quotes of 16-1 for the Triumph.
It’ll be interesting to follow these two this season as both prepare to bring Gary Moore only his third festival victory. Who knows, they could be split up yet with Botox Has being introduced into the Albert Bartlett betting as a lively 33/1 outsider.

Leading trainer Nicky Henderson showcased the depth in quality he has at Seven Barrows with a hat-trick of winners on Saturday, and two the day before hand. Chantry House, Pym, Mister Fisher, Call Me Lord and Dame De Compagnie all got their noses in front at the International Meeting for Henderson - a perfect birthday gift for the man who turned 69 during the week.

Although none of them present an obvious Festival opportunity at the moment, the encouraging runs by Mister Fisher and Pym and the impressive big-stage debuts by Chantry House and Dame De Compagnie show that the yard is in as fine-a-fettle as ever. The only disappointment that needs mentioning is Pentland Hills, who could only manage to finish fourth in the International Hurdle, though Henderson still walked home with the trophy thanks to Call Me Lord.

- A great, late charge from Ballyandy to secure second.
- Pentland Hills back in fourth

Well, maybe he surprised some of us. I am a big fan of Sam Spinner; I loved him as a hurdler and eulogised about his chase debut win at Wetherby back in October, where he won despite looking all but out of the race on the back straight - but I thought he had his work cut out with Windsor Avenue.

Instead, Sam Spinner ran Brian Ellison’s highly-regarded novice into the ground and won the Grade 2 December Novices’ Chase by 38 lengths. It was a near-faultless round of jumping, the only error being a near race-ending one but for Joe Coliver’s impressive acrobatics, and if we see this curve of improvement continue there’s no reason why we won’t see him win a Grade 1 soon.

Riders Onthe Storm unfortunate to not get a run out

In a strange turn of events, the favourite for the Caspian Caviar Gold Cup never got the opportunity to line up, due to a self-admitted error from trainer Nigel Twiston-Davies. According to the man himself, he had accidentally scratched the wrong horse from the race just before declarations closed - meaning that, according to BHA rules, he couldn’t be reinstated. It was a tricky situation that was always going to leave one party looking rather silly, but this does strike as one of the situations where the BHA could have just said “No worries” as to not prevent what would have been a great battle. Admittedly, there are rules and they can’t start making special exceptions because it is a big trainer in a big race, but this did come across as another moment where racing rather shot itself in the foot.

Finally, I think a word needs to be said for Cogry. The three-mile handicapping division is not the most glamorous by any means, but it would be a whole lot poorer without Nigel Twiston-Davies’ old warrior. The ten-year-old defended his BetVictor Handicap Chase crown with a gut-busting battle against Rock The Kasbah, West Approach and Singlefarmpayment. Approaching the last it could have gone to any of these old adversaries, but Cogry dug deep - as he always does - and defeated Rock The Kasbah by a whisker. There is something about the way he sets off in front, eyes anyone that come upsides him and tells them not to bother; he’s a proper battler and a credit to the National Hunt game.