Five Things We Learned: King Altior is back! 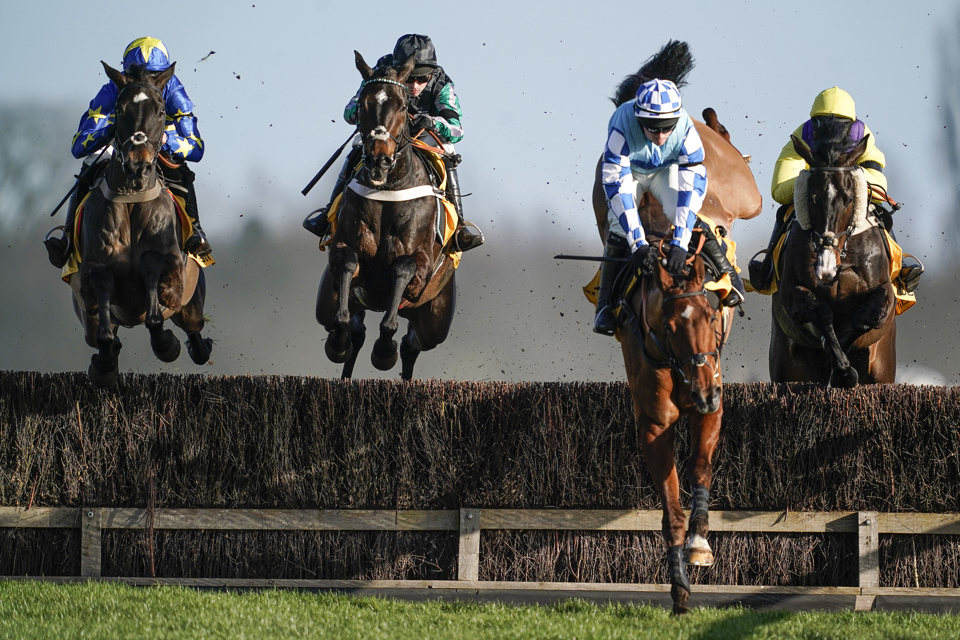 Altior (second from left) impressed with his jumping at Newbury on Saturday.

Joe Tuffin looks at five things we learned from this weekend's action, as two familiar names returned to winning ways and Storm Ciara reared her head...

Altior is one of the most successful horses of all-time, so why is no one keen?

Altior returned to winning ways with a trademark performance in the Grade 2 Game Spirit Chase at Newbury on Saturday, and re-entered the Champion Chase picture in the process - being shortened to 2/1 for the two-mile showpiece.

With that in mind, I can’t for the life of me understand why a two-time Champion Chase winner - who broke the record for the most consecutive wins by a British Jumps horse - was ever doubted in the first place? It seems interesting to me that a horse who has achieved so much in the game - including four consecutive wins at the Festival - has such a large following of people desperate to see him beaten. I was at Newbury on Saturday and it was alarming to hear how many people were saying he’s ‘gone at the game’, despite Betfair’s swanky ‘Layers Lounge’ (which was encouraging punters to take runners on) being all but empty before his racecourse return.

It is true that his season has been far from smooth sailing, with controversy surrounding his scratching from the Silviniaco Conti Chase and an abscess’ ruling him out of a run during the festive period, and of course there was that defeat to Cyrname at Ascot. That alone is a whole other story, stepping into Cyrname’s backyard to take him on over a new trip first time out was never going to be an easy feat, so a loss was hardly as career-ending as people were suggesting.

Nicky Henderson tried to warn us last season that a step up in trip wasn’t going to be an easy one, comparing it to asking Linford Christie to run in the London Marathon, but he was pressured into it and it simply didn’t work. Now Altior is back to what he does best, powering home after clearing the final fence over a two-mile trip, and I think we should all appreciate and admire that. The game will be a whole lot poorer once he’s gone.

The Denman Chase was a fantastic spectacle, not because the two miles and seven furlongs of the contest were filled with action from start to finish because it was quite the opposite, but because the ever enthusiastic 2018 Gold Cup winner Native River galloped his rivals into submission around the Berkshire track and pinged almost all his fences in what was more of a public schooling session than in was an action-packed Grade 2 affair.

Native River is known to have the heart of a lion and he didn’t half show it as he went straight to the front under young Jonjo O’Neil Jr, giving the up-and-coming star the spin of his life. He’s not a flamboyant type by any means - he’s a stout stayer and a bit of a mudlark - but you’d struggle to find one more game than him.

He’s straight and simple and may be more involved in the Gold Cup picture than many think, but even if that doesn’t go to plan there is still the option of the Grand National, a race that has been discussed for the ten-year-old since winning the Welsh equivalent in 2016. Of course should he go to Aintree, the handicapper will not be generous to him. Being officially rated only 3 lb less than Tiger Roll and lacking that crucial Aintree experience that his classy counterpart has in an abundance means the task will be a tricky one, but seeing him out in front relishing every stride of the famous marathon race would be some spectacle.

There needs to be a new approach to standing starts

Saturday’s Betfair Hurdle was unfortunately marred by incidents at both ends of the race, with the well-backed Never Adapt sustaining an injury after the first flight and three horses coming to grief in a chaotic fall after Lightly Squeeze had crashed heavily at the final obstacle. Thankfully there were no fatalities, but no one wants to see injured, stricken horses when they go racing, never mind right in -front of the Grandstand.

The final fence fall was unavoidable, it’s unfortunately a part of the game, but the same can’t be said about the start, however. I’m not quite sure how the standing start became the go-to system for false starts, but having 26 half-a-tonne animals running towards the first hurdle with only about 20 meters to gain momentum was never going ever going to end well. The horses are eager to get going, and they can’t be told to stand still and and get up to an adequate enough speed to clear a hurdle without a bit of momentum beforehand. I’m not sure what the answer is, but hopefully there's a solution so that we can avoid any further injuries.

Warwick’s Kingmaker Chase is a go-to target for Arkle Trophy-bound horses looking to prove their credentials a month before the Festival, but did we see the Arkle winner this weekend? I don’t think so. Rouge Vif, who was an impressive winner of the the Grade 2 event, is as big as 20/1 to claim the two-mile Novices’ Chase and if history is to go by, you can scratch him from your calculations.

No horse has managed to win both races since Voy Por Ustedes in 2006, and you’d have to go back to Fox Norton in 2016 to find one that placed in both, managing third in both contests.

With the Irish challengers holding the strongest form by quite some way in this division, it may be worth paying closer attention to the Arkle equivalent that took place at the Dublin Racing Festival, which responsible for three English Arkle winners since 2014. Notebook won that gamely this year and is 3/1 to back that performance up with a win at Cheltenham. If you’re a bit of a statto, that’s a straightforward selection.

Prepare yourself for Jumpers' Bumpers

One of the main things we learnt this weekend is that Storm Ciara is incredibly inconvenient. The card at Exeter looked like a cracker but unfortunately succumbed to the weather, with all of Sunday's meetings in the UK and Ireland suffering the same unfortunate fate. Step forward Jumpers’ Bumpers.

We haven’t seen a Jumpers’ Bumpers card since March 2018 - when Newcastle and Southwell were tasked with filling the weather-inflicted void of Jumps racing - but given we've lost Punchestown and Exeter on Sunday, Catterick on Monday and a further four meetings have thrown the towel in this week, it may be time to switch your attention from soft going to standard...