Ghaiyyath shows his class in the International Stakes 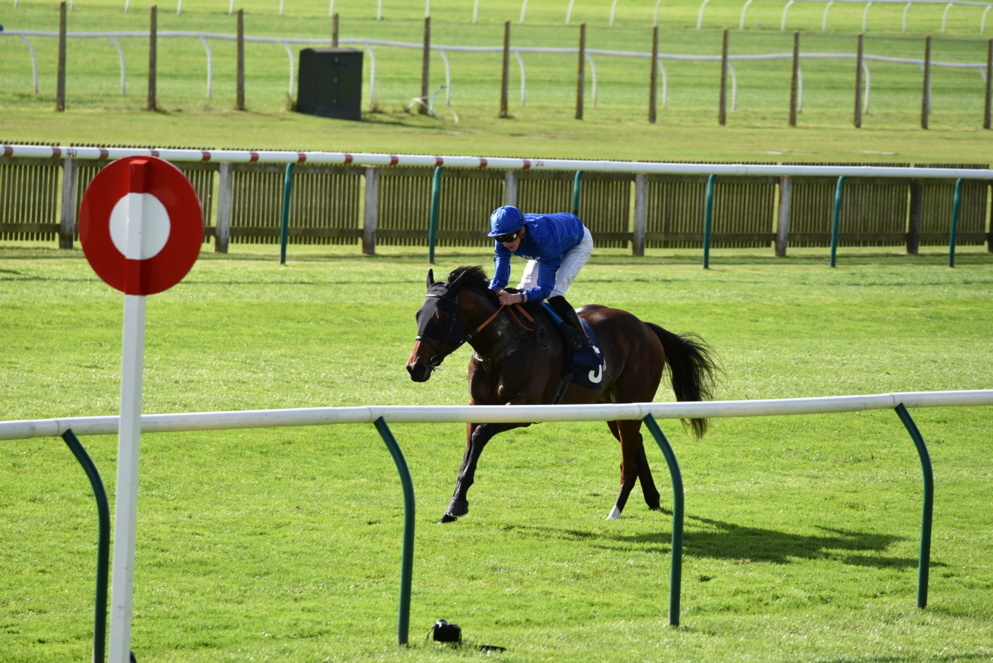 Ghaiyyath has now won each of the Eclipse Stakes, the Coronation Cup and the International Stakes this season.

Ghaiyyath produced a dominant performance to win the International Stakes at York, and collect his third straight Group 1 success in the process.

The five-strong field for Wednesday’s feature was about quality over quantity, with four top level winners lining up for the mile and a quarter contest.

Ghaiyyath was a commanding 5/4 favourite in the betting, and he controlled matters from the front throughout under William Buick, getting six-time Group 1 winner Magical off the bridle with over half a mile still left to run.

Aidan O’Brien’s mare, along with the classic winner Kameko and the Prince of Wales’s hero Lord North all tried to respond, but Ghaiyyath relentlessly kept finding all the way to the line, and recorded an impressive three-length success.

Ghaiyyath was cut into 5/1 for the Prix de l’Arc de Triomphe as a consequence, a race he disappointed in 12 months ago, though rather than discuss future plans, his trainer Charlie Appleby was instead quick to heap praise on jockey William Buick - who he described as producing the 'perfect ride' on the five-year-old.

He said: “I’m delighted with that performance today, most importantly for his highness Sheikh Mohammed, and the team at Godolphin. To have a horse like the one we have on our hands is an honour, and William gave him a fantastic ride.

“It was a nice race to watch with the sort of horse we’ve got; he got into a lovely rhythm and I know even coming up the straight wanted to make their moves on him, but when I saw William just gather him up and change his hands on him, I was confident he’d keep galloping to the line."

Meanwhile, Pyledriver was a clear cut winner of the Group 2 Great Voltigeur Stakes earlier on the card, defeating Highland Chief and the well-supported Mogul into second and third respectively.

The mile and a half contest is seen as a key pointer for next month’s St Leger at Doncaster, and Pyledriver’s trainer William Muir suggested that Doncaster could be next for the three-year-old - who was cut into 6/1 for the final classic of the season.

He said: “I knew that this is a good horse, I said yesterday that wherever Mogul finished we’d be in-front of him! He’s a good horse and he’s getting stronger.

“We talked with the boys a lot over the last weekend about whether to come here or to go to Germany, and I just said that it would be better to come here if we’re serious about the St Leger.

“This is what we do the job for. I’m up at 5am every morning and drove the horse box up here, moments like this is what I do it for.

“This horse was bred by the boys, they couldn’t get a bid for him, so they kept him and they deserve it.”

#AD Minimum deposit of £10 using deposit code 30F - A qualifying bet is a ‘real money’ stake of at least £10 placed on any sports market - Minimum odds of 1/2 (1.5) - Free bets credited upon qualifying bet settlement and expire after 7 days - Free bet stakes not included in returns - Casino Bonus must be claimed within 7 days • To withdraw bonus/related wins, wager bonus amount x40 within 14 days • Wagering req. vary by game • Withdrawal restrictions and Full T&C’s apply. 18+ begambleaware.org
get offer
Bet £10 Get £40 in Free Bets
#AD 18+. Play Safe. New customers using promo code M40 only. 1x per customer. Min £/€10 bet. Min odds 1/2 (1.5). Free bets of 2 x £/€15 issued after first qualifying bet settles. Max £/€10 Bonus. 35x wagering requirement. Max redeemable bonus: £25. Casino bonus expires after 72 hours. UK & Eire only. Additional T&Cs, including free-bet, game, location, payment method and stake contributions apply. begambleaware.org.
£20 Risk Free Bet Refunded In CASH On Losing Bets (APP Only)
#AD New customers only. Deposit £20 using card or Trustly. Up to your first £20 of losses will be refunded as CASH within 24 hours of qualifying bet having been settled. T&Cs apply
Welcome Offer
#AD Open Account Offer. Up to £100 in Bet Credits for new customers at bet365. Min deposit £5. Bet Credits available for use upon settlement of bets to value of qualifying deposit. Min odds, bet and payment method exclusions apply. Returns exclude Bet Credits stake. Time limits and T&Cs apply. The bonus code ‘100BET365’ can be used during registration, but does not change the offer amount in any way. 18+ begambleaware.org.
Bet £10 Get £40 In Bonuses
#AD 18+ New customers only. Opt in, bet £10 on Horse Racing at odds 2.00+ within 7 days of registering, no cashout. Get 3x £10 Free Bets, set events at odds 2.00+. Plus £10 Game Show Bonus, selected games, wager 40x to withdraw max £250. 7 day bonus expiry. Card payments only. T&Cs apply. begambleaware.org | Please gamble responsibly
Bet £10 Get £30 + 30 Free Spins
#AD New UK & NI customers only. Promo code SPORTS60. Deposit and place first sports bet of £10+ in one transaction, at odds of Evens (2.0)+, settled within 7 days of registration. First bet must be on Sports. £30 in Free Bets credited within 48 hours of bet settlement. 7-day expiry. Payment restrictions apply. SMS validation may be required. Max 30 Free Spins on Blue Wizard at £0.10 per spin. 7-day expiry. Full T&Cs apply.
Bet £20 & Get It Back As CASH If It Loses
#AD New customers only. Place your FIRST bet on any Football market and if it loses we will refund your stake in CASH. Max refund for this offer is £20. Only deposits made using cards will qualify for this promotion. T&Cs apply.
Get Up To £100 In Free Bets
#AD New customer offer. Place 5 x £10 or more bets to receive £20 in free bets. Repeat up to 5 times to receive maximum £100 bonus. Min odds 1/2 (1.5). Exchange bets excluded. Payment restrictions apply. T&Cs apply.
Bet £10 Get £20 In Free Bets
#AD. New members. £10 min deposit & bet on sportsbook, placed & settled at 1.5 min odds within 14 days of sign-up. Win part of E/W bets. 2 non-withdrawable £10 Free Bet Tokens: accept in 7 days, valid for 7 days from acceptance (ex. E/Ws & Multiples), stakes not returned. Click here for Rules & Exclusions. Bet Responsibly. BeGambleAware.org. 18+
Bet £10 Get £20 In Free Bets
#AD Min stake £10. Min odds 1/2 (1.5). First bet only. Free bets expire in 7 days. Cashed out bets won’t apply. Payment method restrictions. Online UK customers only. 30 days to qualify for £20 in Free Bets. 18+. T&Cs apply
Money back As A Bonus Up To £40 If Your First Racing Bet Loses + £10 Casino
New customers only. 18+, BeGambleAware.org. Min deposit £10. Money back as bonus. Wagering requirements: Racing 3x at min. odds of 1.40 (2/5), Casino 35x. Only one bonus can be used at a time, Racing bonus must be wagered before using the Casino, unless the bonus has been forfeited. Bonus will expire after 7 days of opt-in. #ad
Bet £10 Get £5 Or 50% Losses Back Up To £25
To activate your Sportsbook 50% Back Welcome Offer, simply deposit and bet on any Sportsbook markets of your choice at odds of evens (2.00) or greater. If your account has Sportsbook losses at the end of your first day's betting (23:59), we'll refund 50% of your first day's losses as a Free Bet up to £25 (Minimum 3 bets required). If your account is up, you're guaranteed a £5 Free Bet provided you place at least 1 bet of £10 or greater at minimum odds evens or greater. T&Cs apply. 18+ begambleaware.org
£10 Welcome Offer
#AD UK & ROI customers only. 18+. Place your first bet on sports pools and if it loses we’ll refund your stake in cash. Max refund is £10. Qualifying bet is the first sports pool bet added to the betslip. Ten to Follow bets do not qualify. Totewin will be the qualifying bet when a Totewin and a Toteplace bet are struck at the same time. BeGambleaware.org T&Cs apply
Today's Most tipped
Equitation
Kempton 16:40
6/5
9 Tips Bet Here
Soul Icon
Taunton 15:05
4/7
9 Tips Bet Here
Rogue Bear
Nottingham 13:40
1st
9 Tips Result
Fire Lake
Taunton 16:15
9/4
9 Tips Bet Here
Add All Tips To Betslip
Latest racing results
Fakenham
14:40
Full Result
1st Paddys Motorbike
7/4
2nd Atholl Street
11/10 F
3rd Cenotice
3/1
Taunton
14:30
Full Result
1st See The Sea
2/1 JF
2nd Glory And Honour
2/1 JF
3rd Pillar Of Steel
9/2
Nottingham
14:15
Full Result
1st Raasel
15/8 F
2nd Dark Shot
12/1
3rd Rebel At Dawn
7/1
View All Today's Results