Glorious Goodwood Day 4 Tips: Back this speedster to down Battaash in King George Stakes 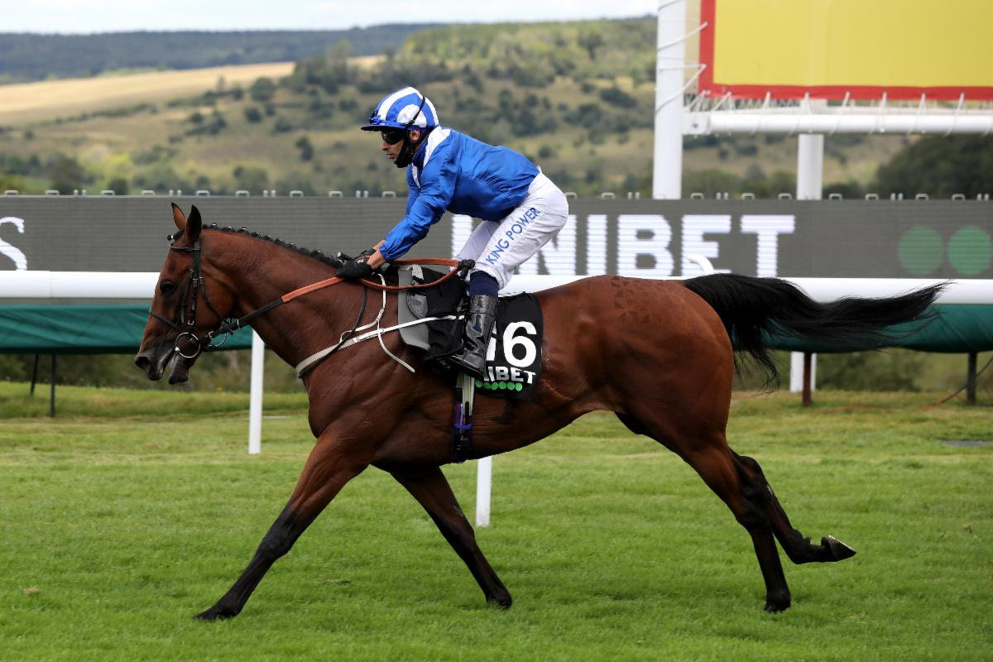 There's a bit of everything for punters on day four of Glorious Goodwood with the King George Stakes the highlight at 15:35, as Battaash bids for a fifth win in the race, but we are taking on the speedster with a value option, and you can check out all our tips here...

We kick off Friday's racing with the longest race of the entire meeting, as the stayers do battle in an energy-sapping 2m 4f 134y event, and with the bookmakers going 8/1 the field, at the time of writing, then that just illustrates what an extraordinary betting heat punters have to try and work out. Last year's winner Just Hubert is bidding to retain the marathon crown, but despite being 1lb better off than last year he's been horribly out of form, and is very hard to fancy here.

This could be a race dominated by the first few in the betting and Michael Bell's Platform Nineteen has been hugely progressive in recent times and has racked up five wins from his last six outings, but this is tougher again, and he could just falter. Third in the Ascot Stakes, Elysian Flame has shown to relish these sort of events, but upped 2lb for that Royal Ascot run he could be another that just finds it tough to get his head in front.

One contender lining up that has been finding it tough to bag a win is the hugely consistent Ian Williams-trained The Grand Visir, who was last seen finishing second in the Coral Marathon at Sandown. Prior to that he was third in the Queen Alexandra Stakes at Royal Ascot, and his runner-up finish in the Chester Cup is another smart piece of form. Fourth in this race 12 months ago, the seven-year-old lines up off the same mark in the 2021 running, and if he can hold a prominent position throughout then he can kick clear and claim glory.

Things get no easier for punters at 15:00 with one of the betting heats of the entire week lighting up the south coast downs and a plethora of challengers will fancy landing the Unibet Golden Mile Handicap. John & Thady Gosden's Magical Morning was an impressive winner of the Coral Challenge at Sandown last time out, and the four-year-old will look to follow that up here and notch up back-to-back wins.

He will have a penalty to carry in this contest, but he has to be considered a major challenger, however, it could be the Mark Johnston-trained Maydanny, who finished three-quarters-of-a-length behind Magical Morning at Sandown and he can reverse that form. A winner at this Goodwood Festival 12 months ago, Maydanny will run off a mark of 100, which is what he competed off at Sandown earlier in the season. With him weighted more attractively against Magical Morning then Johnston's charge can duly get the better of that rival here, and with course experience looks a great bet.

The likes of Path Of Thunder, who won at Newmarket last time out for Charlie Appleby, has to be a key adversary, but he will have a penalty to defy, while Rhoscolyn and Shelir are another two exciting runners in this thrilling event, but Maydanny is the selection.

Battaash, Battaash, Battaash. It's all about Battaash....isn't it? Well the four-time winner of this Group 2 contest is bidding for fabulous fifth success in the 5f sprint showpiece of the week, and the Charles Hills-trained speedball is a warm favourite for the Friday showpiece at 15:35.

Dominant in recent seasons in this event, Battaash has simply blown his rivals away at Goodwood, but he could arguably have his toughest test to date, and having failed to land any sort of significant blow in the King's Stand Stakes at Royal Ascot last month, could he finally relinquish his stranglehold on this event?

Unlucky to be demoted in the Commonwealth Cup having past the post first, Dragon Symbol then ran a fine race when second in the July Cup, and he is a player, but a drop back to five furlongs may scupper his chances. One that will enjoy the minimum trip is Art Power, as he lead for a long way in the six-furlong Diamond Jubilee Stakes at Royal Ascot before tiring late on, while there was a similar story in the July Cup as well, as having led for most of that Group 1 the Tim Easterby-trained raider was just outstayed by some classy rivals over six furlongs.

Now, he may not be able to deal with the early dash of Battaash in this contest, but if he can eyeball the Hills sprinter then that could well unearth a possible chink in the armour of the favourite, and with Art Power able to withstand a high speed for a long time then he could well break the reigning champion, and he can claim his well deserved big race success for the season after several knocks at the door.

#AD New bettors only; Valid from 14/07/2022 09:00 GMT to 14/08/2022 23:59 GMT; Deposit (no Skrill/Neteller) and place your FIRST bet on any UK/IRE horse racing market at odds of 4/5 on singles or 2/5 per leg for acca; If your bet loses, get your stake back as a free bet of up to £20; Free bet valid for 7 days; Bet types restrictions; Terms apply; 18+ begambleaware.org
get offer
Bet £10 Get £30 In Free Bets
#AD 18+. Play Safe. New customers using Promo code H30 only, Min £10/€10 stake,  min odds 1/2, free bets paid as 2 x £15/€15, free bets credited after  settlement of first qualifying bet, free bets will expire 30 days after  the qualifying bet is placed, payment method/player/country restrictions apply.
Bet £10 Get £30 Free Bets (APP Only)
#AD New UK, IE & Malta customers only. 18+. Min £10/€10 first deposit using Debit Card or Trustly. Place a bet of £10 at min odds of 1.5. Free bets expire in 90 days. Full T&Cs apply.
Welcome Offer
#AD Bet £10 & Get £50 in Free Bets for new customers at bet365. Min deposit requirement. Free Bets are paid as Bet Credits and are available for use upon settlement of bets to value of qualifying deposit. Min odds, bet and payment method exclusions apply. Returns exclude Bet Credits stake. Time limits and T&Cs apply.
Bet £10 Get £60 in Bonuses
#AD New UK customers only. Register using the promo code BETFRED60, deposit and place first bet of £10+ on Sports (cumulative Evens+) within 7 days of registration. First bet must be on Sports. £20 in Free Bets to be used on Sports, £10 in Free Bets to be used on Lotto and 50 Free Spins (20p per spin) credited within 48 hours of bet settlement. Further £20 in Free Bets credited 5 days after settlement. Bonuses have a 7-day expiry. Payment restrictions apply. SMS verification and/or Proof of I.D and address may be required. Full T&Cs apply.
Bet £20 & Get It Back As CASH If It Loses
#AD New customers only. Place your FIRST bet on any Horse Racing market and if it loses we will refund your stake in CASH. Max refund for this offer is £20. Only deposits made using cards will qualify for this promotion. T&Cs apply.
Money Back As Cash Up To £20
#AD Max £20 refund on first bet. Bet must be placed in first 7 days of account opening. Only deposits made via Debit Card will be eligible for the promotion. T&Cs apply. 18+ begambleaware.org
Bet £10 Get £30 Free Bets + £10 Casino Bonus
#AD Minimum deposit of £10 using deposit code 30F - A qualifying bet is a ‘real money’ stake of at least £10 placed on any sports market - Minimum odds of 1/2 (1.5) - Free bets credited upon qualifying bet settlement and expire after 7 days - Free bet stakes not included in returns - Casino Bonus must be claimed within 7 days • To withdraw bonus/related wins, wager bonus amount x40 within 14 days • Wagering req. vary by game • Withdrawal restrictions and Full T&C’s apply. 18+ begambleaware.org
£41 In Bonuses
#AD Place a £25 fixed odds bet at minimum odds of 1/2. Get 5 x £5 free fixed odds bets + 2 x £5 free Winning Favs spread bets + 50 spins on Starburst + a £1 Race Index spread bet. Free bets and spins must be claimed within 28 days of opening. Free bet/spin stake not included in any winnings. Ts&Cs Apply. 18+ begambleaware.org
Bet £10 Get £20 In Free Bets
#AD Min stake £10. Min odds 1/2 (1.5). First bet only. Free bets expire in 7 days. Cashed out bets won’t apply. Payment method restrictions. Online UK customers only. 30 days to qualify for £20 in Free Bets. 18+. T&Cs apply
£25 Free Bet + 10 Free Spins
If your account has Sportsbook losses at the end of your first day's betting, QuinnBet will refund 50% of your losses as a Free Bet up to £25 (min 3 bets) Plus 10 Free Spins on Asgard Warriors. Even if your account is up, you're guaranteed a £5 Free Bet Plus 10 Free Spins provided you place at least 1 bet of £10 or greater at the minimum odds. T&Cs apply | 18+ New UK Customers Only | BeGambleAware.org
Latest racing results
Ffos Las
18:40
Full Result
1stAlbion Princess
13/8F
1stRikona
11/2
3rdCorsini
11/1
Gowran Park
18:30
Full Result
1stOne Small Step
22/1
2ndMassaman
7/1
3rdMaster Matt
22/1
Kempton
18:15
Full Result
1stHeavenly Breath
5/4F
2ndLiberty Mountain
28/1
3rdSo Chic
11/2
View All Today's Results