Gordon Elliott Entries for Day 3 of the Cheltenham Festival: Check out his strong team for Thursday 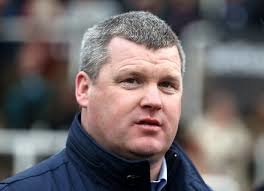 Gordon Elliott has a strong team heading to Cheltenham on Thursday

Top Irish trainer Gordon Elliott will saddle a bumper string at the Cheltenham Festival on Thursday, and we focus our attentions on the Cullentra House runners here for day three of the National Hunt showpiece...

Six of the 24 runners will be saddled by Gordon Elliott in the 2022 Pertemps Final, and there's no doubt the spearhead of the team will be Sire Du Berlais, who bids for a third win in the race. Second in the Stayers' Hurdle last season, Sire Du Berlais won this race back in 2019 and 2020, and off top weight has to be a major player for glory once again.

Adding strength in depth to the Elliot charge will be Dunboyne, who has snuck in at the bottom of the weights and is a potential improver, while Dallas Des Pictons has run well at the festival before and has to warrant respect. Completing the Elliott sextet will be Sassy Yet Classy, Folcano and Tullybeg and neither of that final trio are without chance in a race that could go the way of Elliott.

A shock winner of the Irish Gold Cup last month, Conflated will drop back in trip and have a crack at Allaho in the Grade 1 Ryanair Chase, which is off at 14:50 on Thursday. Elliott had toyed the idea of sending him to the Cheltenham Gold Cup on Friday, but has opted to send him here and he certainly adds significant depth to the race.

Reigning champion Allaho will be very tough to beat, if he can replicate last year's display, but Conflated is still a horse open to improvement, and if he can get on the front end he could be tough to catch in the closing stages for the Elliott team, who will fancy their chances of upsetting the apple cart here.

With a strong hand in most of the handicaps this week, Gordon Elliott will be hoping he can pick up victory in the Plate Handicap Chase, which is off at 16:10 on day three of the Cheltenham Festival, and Elliott will saddle three contenders in this competitive looking betting heat.

Yet to taste victory over fences, Grand Paradis has put up some encouraging displays over fences during his career, and he could be attractively handicapped to go close here, while Rob James will take 7lbs off the top weight Hardline, who could play a part, if producing his best. Last seen finishing fifth behind Ciel De Neige, Fancy Foundations will be the final Elliott-trained runner in this event, and not seen since December he could be another player.

Wins at Punchestown and Leopardstown have catapulted Party Central into the picture for the Mares' Novices' Hurdle, and the smart Gordon Elliott-trained mare is one of two representatives for the Irish handler in the penultimate race on day three of the festival. Say Goodbye will be the second shot fired by the Elliott gun and she was last seen chasing home Party Central, and it's hard to see her reversing the form on Thursday. A big-priced outsider for this contest, Say Goodbye looks to be the second string for what is a race that is full of intrigue.

Gordon Elliott will have a strong hand in the Kim Muir Handicap Chase, which concludes day three and one of the main handicap fancies across the week for the Cullentra House team is Frontal Assault, who is a hot favourite to claim this contest. Yet to taste victory over fences, Frontal Assault will have the burden of top weight, but he has shown solid form to date and could be chucked in off a mark of 145.

Third at Fairyhouse last time out, Smoking Gun will be another leading player for this contest and is the ride of star amateur Jamie Codd, while Fakir D'Alene and Glenloe complete the Elliott quartet, and both have capabilities of delivering in this hugely competitive event.