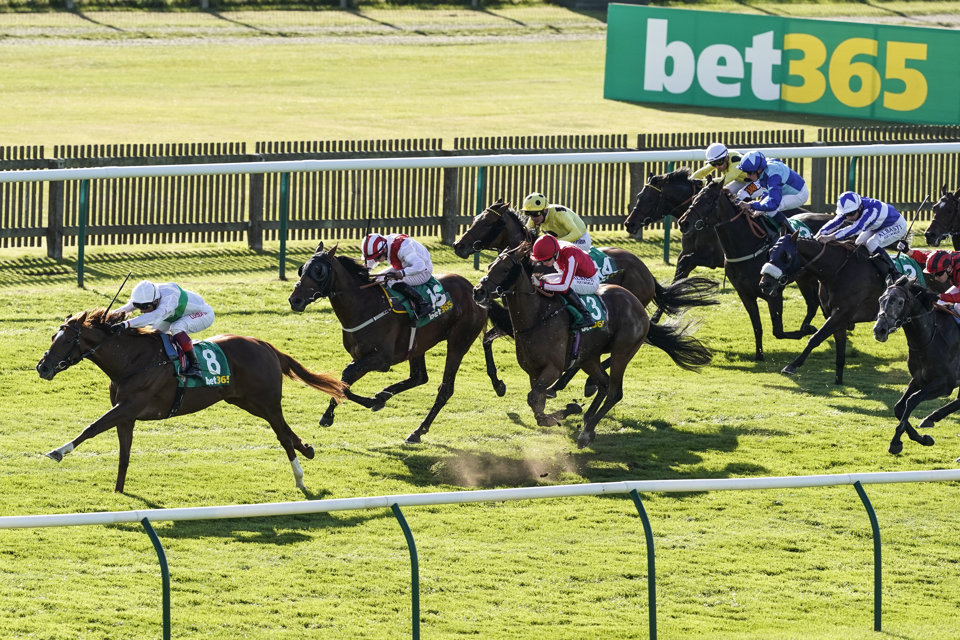 Check out our best bets on Cambridgeshire day at Newmarket on Saturday.

There's a mouth-watering day's racing in front of the ITV Racing cameras on Saturday with Newmarket and Haydock Park hosting top notch Flat action, and our man Steve Chambers has elected to focus his attentions on the final day of the Cambridgeshire meeting at Newmarket as well as at Haydock and has picked out his best bets here...

There's a mouth-watering renewal of the Group 1 Cheveley Park Stakes at 14:25 and all eyes will be on the epic clash between the Aidan O'Brien-trained Meditate and Richard Hannon's Trillium, who have been two of the star juvenile fillies this season, and of the pair the former makes more appeal.

However, one at a more attrractive 16/1 that could make the frame at the very least is the Saeed bin Suroor-trained MAWJ, who has won two from two at Newmarket and has raced to a high level throughout her fledgling career. Second behind Meditate in the Albany Stakes earlier in the season she then beat Lezoo in the Duchess Of Cambridge Stakes at Newmarket before finishing a disappointing fourth in the Lowther Stakes at York last time out. A return to Newmarket is sure to see her at her best, and while it's hard to see her reversing the Royal Ascot form with Meditate she could be a major player to gain a podium spot and she's the each-way value here.

On a day of tough handicap conundrums for punters, none come tougher than the 14:40 at Haydock, as a bumper field of sprinters head to the five furlong start and prominent figures in the betting include the likes of Equality, Alligator Alley and Nomadic Empire. However, it's worth taking that trio on with a real in-form sprinter in the shape of Robert Cowell's ISLE OF LISMORE, who is an eye-catching 11/1 chance, at the time of writing.

The four-year-old son of Zebedee was last seen bounding to a mightily-impressive two length victory at Newmarket at the end of August off a mark of 79, and while he will need to defy a 6lbs rise for that dominant victory if he's on a real going day then he's more than capable of going in again. A dual winner at the track, Isle Of Lismore won off 82 at Flat HQ earlier in his career, so he doesn't have to find too much more to land this prize, and with him heading into the contest in excellent form then he has to be a leading contender at attractive double-figured odds.

A rip-snorting renewal of the Group 1 Middle Park Stakes at 15:00 will see a host of colts looking to enhance their possible 2000 Guineas claims for next season and the likes of Aidan O'Brien's Blackbeard, Karl Burke's Marshman and the Charlie Appleby-trained Mischief Magic will all fancy their chances of landing the prize at Newmarket.

The one that makes the most appeal is the former of that triumvirate as BLACKBEARD can hand the O'Brien team a seventh victory in the race, as he showed last time out when bounding to an impressive win in the Prix Morny in France that he can produce the goods at the highest level, and he could prove to be a class above here.  He's improved immeasurably since finishing fourth in the Coventry Stakes back in June and land a brace of notable races in France, and providing Ryan Moore can keep a lid on him at the start (been known to be a little fractious before racing) then the son of No Nay Never can bound to glory.

A monster field do battle for the hugely valuable Cambridgeshire Handicap at 15:40 and all eyes will be on the William Haggas-trained duo of Mujtaba and Protagonist who dominate the betting and should be very tough to beat. But, with such a big field going to post then there are set to be some attractive each-way terms with some bookmakers and it's worth looking for a value alternative.

Saeed bin Suroor trained Bedouin's Story to victory in this race 12 months ago and the Godolphin handler can retain the crown on Saturday as FIRST VIEW can land the spoils at 16/1. A winner at Leicester three starts ago, the five-year-old son of Exceed And Excel failed to build on that when seventh in the John Smith's Cup at York, but he bounced back to winning ways last time out at Kempton on the all-weather. A half-length winner in handicap company that day, First View will carry a 4lbs penalty for that success, but he still has the capabilities of going further in the handicap this season, and that burden shouldn't halt his momentum and he can land the prize in fine style at the weekend.