You are using an outdated browser. Please upgrade your browser to improve your experience.
This website uses cookies
Cookies help us and our partners provide statistics. By browsing this website, you consent to the use of cookies in accordance with our Cookies Policy.
Accept & Close
Cheltenham Festival Day 1
Select Race
Free Bets Betting Offers Lucky 15 Tips Today's Racing Naps 2023 Cheltenham Festival
By Izzy Phillips 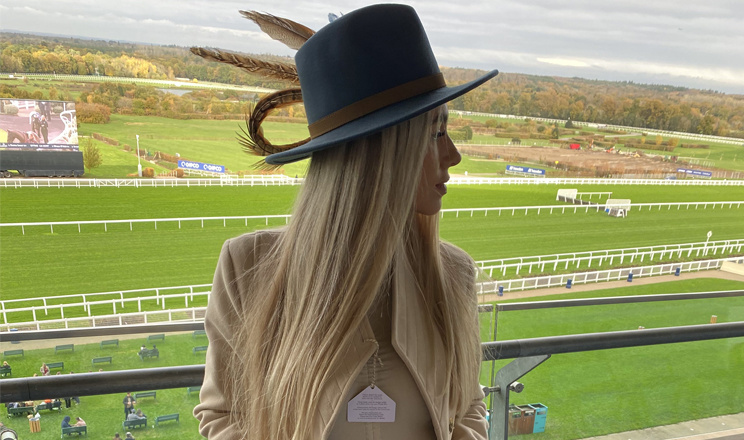 We are set for some epic National Hunt racing over the Christmas period and our columnist Izzy Phillips is back to take a look at all the imminent festive action. As well as providing her big-race tips for the likes of the King George VI Chase and Welsh Grand National, she goes down memory lane and looks back at some of her fondest memories from this magical time of year...

The festive season may be in full swing but the racing is not, with many of us waking up to snow last week with the freezing temperatures playing havoc with the racing calendar. There have been a series of abandonments affecting some of the big race cards leading up to the festive period. For most of us racing fans we now begin to feel withdrawal symptoms from our favourite sport and wait in a heightened state of anticipation for what can always be counted on as a bumper stretch of racing.

It all starts with the usual King George VI Chase card at Kempton on Boxing Day, now bolstered by the addition of the Long Walk Hurdle. Moving into those days between Christmas and New Year where no-one knows what day it is but racing fans enjoy: the Welsh Grand National, Challow Hurdle and Relkeel Hurdle as well as four days worth of racing from Ireland with the Leopardstown Christmas Festival. All of which lead up to racing at Cheltenham on New Year's Day! Honestly, what could be better?

Christmas is a special time of year; for most of us a time that is steeped in memory. Some of my fondest Christmas memories involve racing. I’ve never been one to make a pilgrimage to Kempton on Boxing Day but we have watched it on TV every year religiously the whole family gathers around much like many do for the Queen’s speech. One year that always stands out in my mind is 2011. That year, the King Goerge created a great family divide!

My Dad was bullish about the chances of Long Run with statements of ‘he’s the reigning Gold Cup & King George Champion’ echoing around the house. I didn’t want to desert Kauto Star - something in my heart was telling me he’d win one more and Grandad agreed with me.

We sat quietly listening to all the bluster from Dad for a good couple of hours. Then race time came. Grandad was sitting on the sofa and me on the floor next to him; Dad was on the other sofa - the physical divide and tension was palpable. The race was off. Long Run was looking good but Kauto looked better. In the back straight Kauto was already starting to dominate and Long Run looked beat - even Dad gave up and cheered him home with Grandad and I. He was roared home and there were incredible scenes for what is one of National Hunt's most treasured stars. Regaining his Cheltenham Gold Cup was masterful but he really showed he was as much about courage as he was about class coming back to win his fifth King George. I’ll never forget watching it with my family and I still think about it now every year as I sit in that same seat that Grandad sat in (yes we have the same sofa as in 2011 - it was old then & it’s really old now). But that seat has brought some good luck. I've sat in it and cheered home Clan Des Obeaux and Frodon with my brother & Dad in the years since. Hopefully we’ll be sitting there cheering home the winner this year too.

"The steeplechaser of a lifetime Kauto Star is in front..." #KingGeorge

On the topic of the King George - this year’s renewal will be run at an earlier time than usual, moving from 3pm to 2:30pm. However, the race does seem to have fallen apart a bit. Protektorat only holds an insurance entry for Dan Skelton - he has outlined he’ll only run if the race is postponed or moved to a different track. Following his impressive victory in the Many Clouds Chase, Noble Yeats is only due to run once more before the Gold Cup so is likely to miss the race also. Paul Nicholls is taking it as business as usual with a strong hand including current favourite Bravemansgame as well as Hitman and Frodon.

It would be a dream for Frodon to win the race for a second time with Bryony hopefully back from her collarbone injury to ride him to victory. However, his race in the Betfair Chase at Haydock came too soon so hopefully he has fully recovered from that. Sam Twiston-Davies on the second string for Nicholls is never to be discounted as we have seen from his victory on Clan Des Obeaux in 2019. He could have every chance on Hitman and is currently 3rd favourite for the contest.

Bravemansgame is a worthy favourite and was seriously impressive when putting to bed his rival Ahoy Senor in the Charlie Hall at Wetherby, since then Ahoy Senor was a disappointing third to Noble Yeats in the Many Clouds chase so there is nothing to suggest that Bravemansgame won't easily have him beat again. So let’s turn our attention to some of the other contenders. L’Homme Presse looks a dangerous rival but only if the ground is right and it’s a bit too soon to tell with that one. I think the Irish could pose the biggest threat as Envoi Allen came bursting back on to the scene in the Ladbrokes Champion Chase at Down Royal last time. It seemed the step up to three miles unlocked some untapped potential. Henry De Bromhead is quite confident of his chances stating ‘the race should really suit him’. Is he fully on a comeback trail? Could he be the biggest danger to the Nicholls trio?

Double the odds, any sport, any bet, any odds!
get offer
get offer

Following the chaos of the big freeze we are lucky enough to have had the Long Walk Hurdle (usually run at Ascot) rescheduled to Kempton on Boxing Day. The Long Walk Hurdle is a fantastic race that has seen some of the best staying hurdlers over the years with winners like Big Buck's and Barocouda. My favourite renewal was in 2014 when Reve De Sivola looked completely beaten by Zarkandar but fought back gamely to snatch victory on the line. I was well prepared for this year’s renewal and looking forward to another round of Paisley Park vs Champ. Changing the venue certainly does make a difference as it’s an unknown for Paisley Park because he’s never run there before, Champ has but way back in 2017! I’m still confident that with an excellent return run at Newbury under his belt Paisley Park will slowly reel Champ in and create a thrilling finish to another Long Walk.

The Welsh Grand National at Chepstow on the 27th December is a wide open contest. There are a few contenders with a chance but with quite a few ground dependent the picture could look quite different subject to what the weather does. Royale Pagaille is a notable entry - he also holds an entry in the King George. His owner, Rich Ricci has already stated that his return will be ground dependent so we will wait to see whether it is England or Wales that gets more rain in the coming days. If he does go in the Welsh National and the ground is soft/heavy I quite like his chances to run well.

Last year's winner Iwilldoit is entered in the race but hasn’t been seen since winning it. The decision about whether he will run is set to be left until the last minute by Sam Thomas. If he runs I would be concerned about his chances of a repeat win on the back of a large break and an injury. Another notable runner is The Big Breakaway for Joe Tizzard; he is keen to win this race. The Big Breakaway has a winning record at Chepstow and was impressive at Haydock when he locked horns with Fontaine Collonges as he was staying on all the way home in a photo finish. The extra couple of furlongs do not look to pose a concern for him and he’d be my current selection.

My selection: The Big Breakaway

There are set to be a multitude of stars out over the next few weeks in England and Ireland including the likes of Constitution Hill in the Christmas Hurdle at Kempton and Facile Vega in the Future Champions Novice Hurdle at Leopardstown. I believe we’ll all have a lot to be talking about over the next couple of weeks and hopefully more clues for our Cheltenham Festival Ante-Post selections. Safe to say I can’t wait for the festive racing to begin.  Good luck with your festive punts.

I wish you and your families a Merry Christmas and Happy New Year.