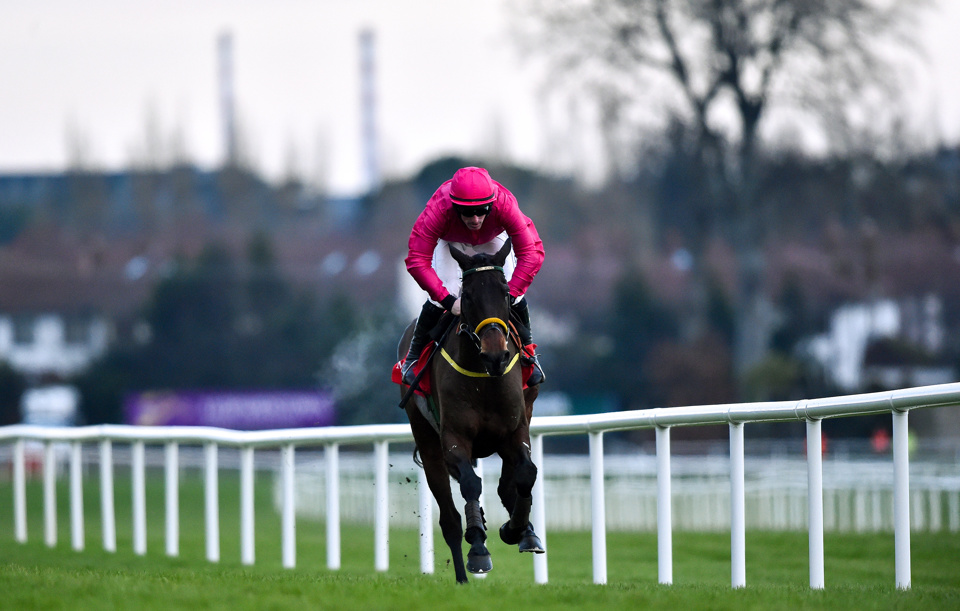 Some smart chasers have won this race in recent years, including Rogue Angel and Snow Falcon (pictured).

Nick Seddon previews Wednesday's Kerry National at Listowel, which looks set to be contested by some familiar names in the staying chasing division...

Listowel races' seven-day Harvest Festival is already well underway, and the feature race of the week comes in the form of the Kerry National over three miles, which seems likely to have a maximum field of 18 runners.

It generally takes a smart type to win this, with the likes of Snow Falcon (2018) and Rogue Angel (2015) coming out on top in recent years, though horses at the lower end of the handicap have dominated of late. Indeed, no horse has carried more than 11-05 to victory since 2010, meaning that each of Peregrine Run, Ravenhill and Mortal have a stiff task on their hooves.

The first-named will carry a top weight of 11-10, and faces a quick turnaround having fallen at the first over two and a half miles here on Sunday. He's a very smart performer on his day, winning a Grade 3 contest at Killarney in July, and while he'll be suited by the going, he was pulled-up off 1 lb higher in the Galway Plate earlier in the summer, and has plenty to prove.

Mortal was a smart novice two years ago, and defeated several of this field when returning to winning ways at Killarney last month (Robin Des Foret second, Blazer third, Kupatana fourth). That form is not to be scoffed at, though this is tougher now up 6 lb, while Ravenhill would have serious claims if repeating his effort to win the National Hunt Chase in March, though he's up 11 lb on reappearance.

Robin Des Foret hasn't won since striking in a novice chase at this meeting two years ago, though he is a smart chaser, and generally holds his form well. He enjoys a 4 lb swing in the weights with Mortal here, though his mark of 149 will ask plenty of him. Blazer arrives here on a dangerous mark and can't be discounted, though the most interesting of the trio is Kupatana.

She's a lightly-raced type, though she has some useful form under her belt, winning a listed mares' chase at Cheltenham in April 2019. That performance persuaded Kenneth Alexander to purchase her and switch her to Henry de Bromhead, and although she struggled to dazzle on her first three starts in the Honeysuckle colours, two of those came in testing conditions, and her reappearance run last month was a firm step back in the right direction. She should strip fitter for that outing here, and bearing in mind that she was an upwardly-mobile type in 2018-19, there could be more to come from her yet, with her current mark of 140 looking more than fair. Dylan Robinson takes off a useful 3 lb, and she offers plenty of value each-way for a yard that won this 12 months ago.

Two horses who are proving popular in the market are Doctor Duffy and Cabaret Queen. The latter was well-fancied for some valuable contests last season, including the Ladbrokes Trophy, and while she generally struggled, she bounced back with a fine effort to finish third in the Galway Plate in July. She's been raised just 2 lb for that, and it would be no surprise to see her go close for her powerful yard. Meanwhile, Doctor Duffy won a similar race - the Mayo National - in really good style at Ballinrobe earlier this month, and he'll need more here now raised 10 lb by the handicapper - though a big run is seemingly expected by the market.

Three more to consider are Three Musketeers, Plan Of Attack and Spyglass Hill. The first-named was a fine second in Kilbeggan's Midlands National in July, though he was well held in the Galway Plate last time and needs more here. Like  Three Musketeers, Spyglass Hill struggled at Galway last time, though he was entitled to need that on reappearance and there could be room for manoeuvre off his current mark, though it is Plan Of Attack who catches the eye for win purposes.

The seven-year-old enjoyed an excellent campaign last season, winning twice from four outings and signing off with a fine fourth in the Kim Muir. He's able to take his chance off 1 lb lower here, and bearing in mind he's won off the back of a break in the past, he looks worth supporting alongside stablemate Kupatana for Henry de Bromhead - who is aiming to win this for the second year running.