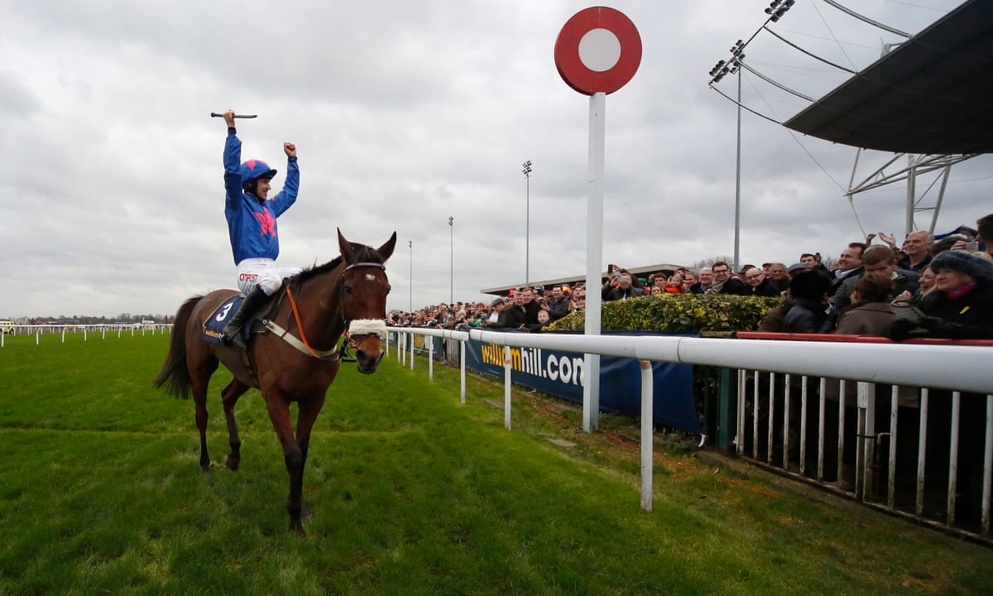 Cue Card winning the King George at Kempton in 2015.

A perfect 10 runners have been confirmed for the King George VI Chase at Kempton on Boxing Day.

The King George entries include a two previous winner, the reigning Gold Cup champion, three Irish Raiders, four winners last time out and three saddled by the winning-mist trainer of the race.

The tape will go up on Sunday's big race at 3.05pm at Kempton Park and we've had a look at each of the entries with their current form, past King George performances, the silks they'll be wearing and all important odds for the race.

One of two Willie Mullins entries, the seven year old lacks experience and came up short as a novice chaser last season, third in the Marsh Novices' Chase at the Cheltenham Festival before winning a valuable handicap at the Punchestown Festival. He was travelling well when unseating Bryan Cooper in the Grade 1 John Durkan Chase earlier in the month. Its yet to be decided who will take the ride at Kempton.

A winner of five of his six chases to date, seven year old Chantry House is an interesting contender for Nicky Henderson whose stable is coming into form at the right time. A winner of the Marsh Novices' Chase at Cheltenham he holds form over Asterion Forlonge who he beat five lengths that day and has followed it up with a Grade 1 success at the Grand National meeting at Aintree. He won a Listed contest at Sandown on his reappearance and looks to have solid each-way claims.

Paul Nicholls has absolutely owned this race, the winning-most trainer in history of the King George and stable jock Harry Cobden takes the ride. The pair teamed up when winning this race in 2018 and 2019 before finishing third behind stablemate Frodon 12 months ago. Bypassing Cheltenham in favour for the Grade 1 Betway Bowl at Aintree last April where he hacked up by 27 lengths before also winning the Grade 1 Punchestown Gold Cup in the spring beating Al Boum Photo and Kemboy amongst others. Still only nine years old, you have to think he has solid claims here.

Jeremy Scott saddles the outsider of the field Dashel Drasher who should find this company too hot. A winner of half his chase contests, he won the Grade 1 Ascot Chase last February, his biggest win to date. He's yet to run over 2m6f so the trip would be a question mark and needs to reverse the form with Lostintranslation who he was beaten 16 lengths by at Ascot last month in his only race this season.

Frodon and Bryony Frost are an absolute winning machine together none more so when taking this race in spectacular style 12 months ago. A lot has gone on for Frost since but she'll be in her element aboard the 9yo who won on his seasonal reappearance, the Grade 1 Ladbrokes Chase at Down Royal in October. That may have been his big target this season hence the prices but she's sure to take him out front and see what happens on Sunday.

After a couple of years in the wilderness Colin Tizzard's Lostintranslation impressed last time out when winning the 1965 Chase at Ascot. That was his first win since November 2019 when he impressively won the Betfair Chase and although he has a poor record imn this race (pulled up twice) he may have got over some issues and come here in good condition. A lively each-way shout.

Henry De Bromhead enters his Gold Cup star who is joint favourite with Clan Des Obeaux. Beaten five lengths by Frodon on his seasonal reapparence at Down Royal he'll come on for that run and will be likely teaming up with Rachel Blackmore who has been scooping the end of year prizes.

Nicky Henderson's second entry Mister Fisher has something to find in this company. His last win came in last season's Peterborough Chase which was moved to Cheltenham and has since pulled up in the Ryanair Chase and unseated in the Betway Bowl won by Clan Des Obeaux. Beaten a neck by Frodon in the John Oaksey Chase at Sandown last spring on his last start, he steps up in trip here on a course where he's won twice.

Fourth in this race last year this talented eight year old has finished second in a Ryanair Chase at the Cheltenham Festival. Most of his runs have come over two miles but steps up in trip here and has his first run for Paul Nicholls with Gavin Sheehan taking the ride.

Willie Mullins second entry comes in the shape of this 8yo who has just the two wins from his 11 starts over fences and not since a Grade 3 success in November 2019. Third in a Ryanair he was fifth in the Grade 1 John Durkan earlier this month and needs a serious step up here.