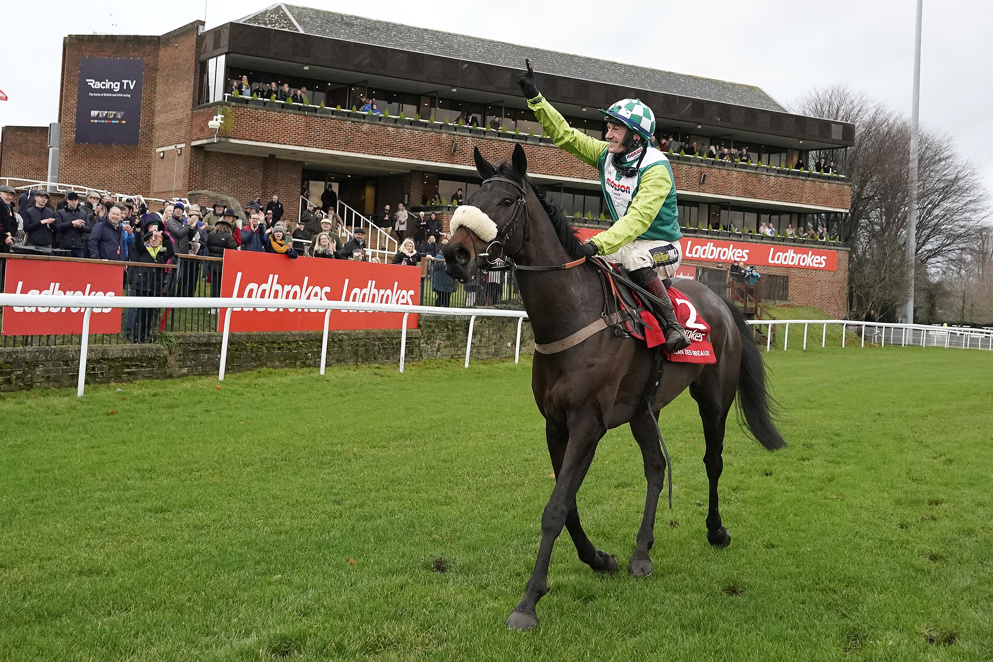 Steve Chambers looks back down memory lane and picks out some of his favourite and most memorable King George VI Chase moments from recent times ahead of the Boxing Day showpiece at Kempton Park...

One of the most prestigious races of the entire National Hunt season, the King George VI Chase has a glittering roll of honour, but as a 34-year-old I sadly missed out on the glittering 1980s where the likes of Silver Buck, Wayward Lad and Burrough Hill Lad claimed victory in the Kempton showpiece. The late, great Desert Orchid's victories in the late 1980s and in 1990 are too long ago as well, but as we head into the mid-90s my first recollections of the race emerge.

Watching racing as a young lad on the BBC and Channel 4 saw you gain an affiliation to certain horses, and often by their colours more than anything. Well, one set of colours that are synonymous with my younger love for racing were those of Jenny Mould. The green with white stars were often seen competing in a host of top notch races with Barton Bank, Tipping Tim and later on with Grand National winner Bindaree.

The former was trained by the legendary David Nicholson and had already tasted victory in the 1993 King George and was sent off the 100/30 favourite to retain his crown in the 1994 renewal. Having narrowly edged out Bradbury Star in the previous year, Barton Bank looked to have the race sewn up as they turned for home. Pulling further and further clear between the last two fences, Adrian Maguire only had to get Barton Bank over the last fence and he would duly land a notable King George double. However, a thuddering mistake sent Maguire out the side door and crashing into the Kempton turf, and it left the door wide open to Algan, who capitalised on Barton Bank's mistake and claimed an unlikely victory.

One of the finest equine talents during the 1990s was One Man, who had a significant following through that decade, as the galloping John Hales-owned grey produced some scintillating performances on the track, with his win in the 1996 King George VI Chase one of his best. Having won the rescheduled 1995 renewal by a whopping 14 lengths, the Gordon Richards-owned raider returned 12 months later and scooted clear in the closing stages to win by 12 lengths.

Sent off an odds-on favourite, One Man cruised into the race for Richard Dunwoody, before the pair gently moved away from AP McCoy on board Mr Mulligan. Comfortably clear as they jumped the last fence, One Man's lead was extended following a last fence fall for Mr Mulligan, and it meant that reigning Grand National hero Rough Quest would bag second place, with Barton Bank back in third.

Only five runners went to post that day, but the form was boosted considerably later on in the season, as the aforementioned Mr Mulligan went on to turn the tables on One Man (finished sixth) and win the Cheltenham Gold Cup for McCoy and trainer Noel Chance, but still to this day One Man's demolition of his rivals that day is one of the most accomplished performances seen in recent times.

A white Christmas? We had one in 1996 when One Man won the King George for the second time in the same year (1995 renewal delayed until new year). Mr Mulligan was unscathed after his fall and on his next start won the Cheltenham Gold Cup.
#RacingTVFlashback 🏇💨@kemptonparkrace https://t.co/Xu8H0UaHz6

2004 - Kicking King Reigns, But Only After Late Drama

Ten lengths clear as they stormed up to the final fence of the 2004 King George VI Chase, Kicking King and Barry Geraghty were delivering a sublime performance en route to Kempton Park Grade 1 glory, but what was to happen in the closing stages will live long in the memory.

A tired Kicking King dived at the final fence forcing Geraghty to hold on tight on board the Tom Taaffe-trained raider, but as the pair's partnership remained in tact he was then forced to get back into his running as the staying-on Kingscliff and Azertyuiop were looking to bridge the gap on the flailing rival.

However, Geraghty managed to get his mount rocking and rolling again only to be met by an idiotic racegoer running across his path dressed as Father Christmas. Luckily, the protesting silly Santa avoided crashing into the equine star, and Geraghty managed to go on and push out Kicking King to a two and a half length success, which was the start of a sensational few months as the youngster went on to land Cheltenham Gold Cup and Punchestown Gold Cup glory in the spring.

It takes speed and stamina to win a King George VI Chase. As we get closer to this year's renewal, who can forget @BarryJGeraghty keeping hold of Kicking King to take the crown in 2004 #KingGeorge #Kempton https://t.co/x1mHgUCPTO

With 11 wins in the race as a trainer, Paul Nicholls has become the dominant force in the King George VI Chase, as the Ditcheat handler has saddled some of the finest winners in recent times. However, one superstar sits top of the Nicholls tree when it comes to the King George, and that is the ridiculously talented Kauto Star, who won a mammoth five King Georges during a stellar career at the top of the National Hunt racing.

It's not right to just pick out one of Kauto Star's victories from his quintet of successes, as the legendary jumper produced a multitude of sparkling displays to bag the Christmas cracker on Boxing Day. His first win came in 2006 and for years he dominated the contest, winning it for the following three years as well to join Desert Orchid on four wins in the race. His victory in 2009 was arguably his most impressive as he won the race by a record 36 lengths, which is an achievement unlikely to be matched for a long, long time.

Defeat to Long Run in the 2010 renewal saw his crown taken away from him, but at the veteran age of 11, the National Hunt icon returned and grabbed his accolade back from Nicky Henderson's young gun, as Kauto Star broke Dessie's record of four wins, and he now sits top of the tree with five wins.

Spare two minutes to remember the mighty Kauto Star this evening. The race he made his own - the King George VI Chase - takes place at Kempton Park tomorrow. https://t.co/dY7rKaJwr5

2015 - Cue Card Denies Vautour In One Of The Great Finishes

We were treated to a vintage renewal of the King George in 2015 as Gordon Elliott's Don Cossack lined up as the race favourite, but in behind the subsequent Cheltenham Gold Cup hero in the betting lay a plethora of classy chasers. Paul Nicholls saddled Silviniaco Conti, who was bidding for a third King George in a row, while proven top class stars Cue Card and Vautour took their chance, and it was that duo that fought out one of the closest finishes in the history of the race.

Silviniaco Conti was pulled up in the closing stages, while the staying on Don Cossack was a faller two fences from home, which left Cue Card and Vautour to fight out a pulsating finish. Narrowly in front jumping the last fence, Vautour appeared to have the measure of Colin Tizzard's charge as the pair locked horns up the straight, but Cue Card kept on finding for Paddy Brennan and began to close on his rival in the final few strides of the race.

With the rail to aid his chances, Ruby Walsh on board Vautour was throwing everything at his charge, but Brennan's strength on board Cue Card was there for all to see as the multiple Cheltenham Festival winner was not to be denied by his Irish raider and after a agonising wait to the photo finish, it was announced that Cue Card was the winner, prevailing by a head..

One of the greatest King George VI Chase finishes 😍